Memories of Madiba in Mauritius

It was only after five days of blissing out on one of the most idyllic Mauritian beaches that I learned that the beach I was walking on, Le Saint Géran, was the same one Madiba chose to sink his tired feet into after nearly 40 years without the ocean. The last time he had been in the sea was under the watch of prison guards, picking out seaweed from the icy Atlantic on Robben Island.

Zelda la Grange reveals a touching moment from the trip in her bestselling memoir Good Morning Mr Mandela: “After a few days Madiba announced he wanted to go into the water. We were hesitant as we were not sure whether he would be able to stand in the water. He was having difficulties walking and was using a walking stick. Security took him down the terrace into the water and he sat on a chair, allowing the waves to break over his feet. The pure joy on his face touched my heart in a way that is difficult to describe. How could something so ordinary, something we take for granted, bring such pleasure to a human being?”

Tata, Graça Machel, a few grandchildren and his travelling entourage were invited by South African mega-hotelier Sol Kerzner to his famous Mauritian resort for some desperately needed recuperation.

La Grange remembers: “It was like arriving in paradise. Sol had booked a private villa for Madiba and Mrs Machel at the One&Only Le Saint Géran Hotel in Mauritius while the rest of us were accommodated in the hotel adjacent to the villa.

“I had been working for Madiba for 10 years and I had never seen him enjoying a holiday this much. He had private time with his wife and grandchildren; we all enjoyed meals like a big, extended family. For the first time there was no rush. And it was difficult to get used to. Mum had to constantly remind us to relax and that we were on holiday. We watched Mauritian dancers and it is one of only two occasions that I remember Madiba dancing with mum.”

The Mauritian dance she refers to is the sega – a local dance named after the music it’s performed to. The sound of sega originated in the slave camps and from the front lines during the battle for Mauritian independence. The dance is performed without the feet ever leaving the floor, the dancers’ hips and arms rolling in a smooth wave. The accompanying Creole lyrics tell the folk stories of the oppressed slaves.

The island itself is full of historical sights that locate this colonial history but if you’re stationed at the One&Only, as I was, these sights become really difficult to see because the hotel makes it nearly impossible to leave.

It’s not the two Michelin-starred restaurants or the delivery service that brings your Wagyu beef burger straight to your sand hut. It’s not the patrolling frozen yoghurt trolley. It’s honestly not the riverside massages or even the water sports. It’s just the ocean. The hotel frames it all beautifully, but you could be anywhere on this tiny stretch of paradise and feel like the world is quiet. The whistle of the palm leaves and the gentle bubble of the water sing a quiet song together that eases the soul of even the most strung-out urbanite.

If you finally manage to roll yourself off the lounger, head to the bar where any of the barmen easily share stories of their lives growing up in paradise. Many of the hotel staff have worked here since it started. It was the first luxury resort to be built on the island and thus offered employment opportunities that were hard to find elsewhere. The manager of bar services, Oliver Ramtohul, has worked there for nearly 20 years. I ask him for something easy; he smiles and starts chopping.

The cocktail, he explains, is called the Colonial Crush – one of their signatures. He chucks some colonial fruit into a muddler: a few slices of grapefruit and an equal number of lemon wedges with a few sprigs of fresh mint. He pounds them together gently and offers me a smell. It’s the perfect scent of summer, balmy and fresh. He tosses this mixture with ice cubes and a generous glug of tonic water in a shaker and raises his arm high to pour it into a chilled glass.

While I’m nibbling on warm cashew nuts, he describes growing up in Mauritius and how his ancestors fought for him to be able to work in a job he could be proud of. 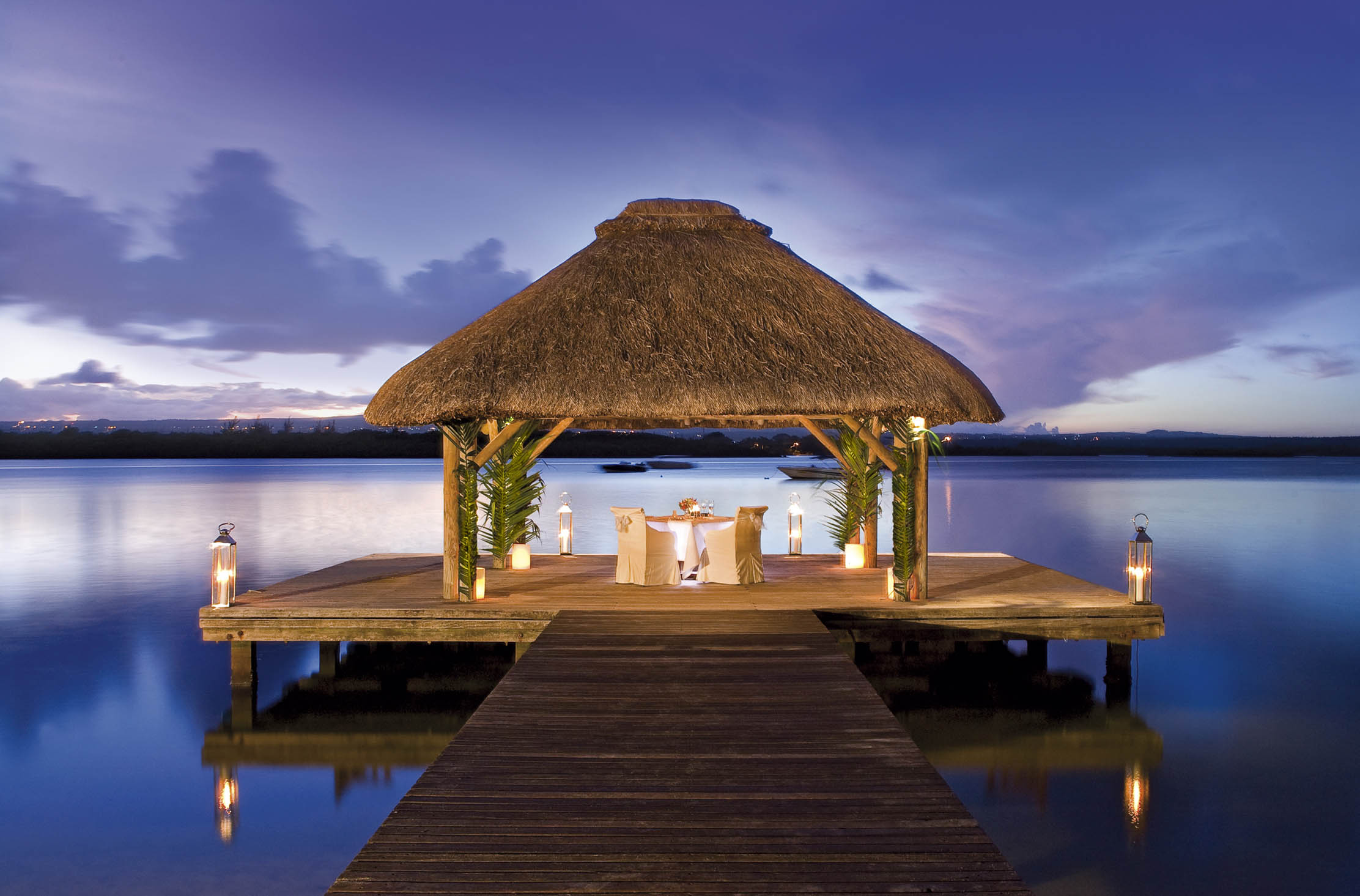 With very little to distract your indulgences, dress up for a dinner at Prime, the fine-dining option at the resort. Local chef Vikash Coonjan prepares a speciality that visitors to the island have to experience at least once. It’s known as the salade du millionaire, a light and simple offering with freshly sliced palm heart as the main ingredient. The palm heart is the soft bit found within the core of the indigenous king palm grown in a palm nursery nearby. It takes one whole six-year-old tree to create four small salads. It’s delicious, but one salad costs as much as restaurant fillet for a table of 10.

Other local specialities include sea urchins picked fresh from the shore right in front of the restaurant.

Mauritius does really have much to offer so do what you must to leave your hotel, even if only for a day. The island is known for its incredible diving so if one day is all you have, head to the southeast of the island and hire a speedboat. Cruise out to Mahébourg and experience the breathtakingly stunning Blue Bay Marine Park. If you aren’t an experienced diver or have children on board, this is the perfect opportunity to get a good sense of the Mauritian coastline and snorkel the shallow underwater wonderland that sits just a few inches below the boat floor.

The guidebooks will tell you to visit the Seven Coloured Earths, but if you aren’t a huge fan of geological formations the hourlong trip may frustrate you. But the journey may be worth it just to experience the odd little museum outside the entrance to the Seven Coloured Earths site. It’s called the Curious Corner of Chamarel and is housed in an exquisite example of contemporary Arabic architecture. The structure sparkles in the sun because of the three-storey wall of water through which you enter to find the whole world literally flipped upside down.

As an exercise in distorted reality, the whole thing gets very trippy with ceilings on floors, disappearing doors, mirrored labyrinths and a permanent collection of truly, utterly curious sculptures.

Just further north in the heights at the top of the island, near the inactive volcano that formed the landmass you’re driving on, you will pass a 33m-tall sculpture of the Hindu god Shiva by the side of the road. According to legend, it is from his hair that the river Ganges flows. He guards the entrance to Mauritius’s own holy Ganges, the Ganga Talao, a crater lake that sits 600m above sea level.

The lake is believed to contain water directly from the Ganges and during religious holidays becomes a site of mass pilgrimage. It is an incredibly beautiful sanctuary where tourists seem to forget about their cameras for a short while.

It’s only when you’re boarding the plane at Mauritius’s new Sir Seewoosagur Ramgoolam International Airport that you notice a significant change in yourself. This time you are smiling at staff as you wave goodbye, the baggage wrapper doesn’t make you feel like you want to wrap him in baggage wrap and waving goodbye to the ushers is nearly as hard as waving goodbye to your mom on the first day of school. I wanted to hug the third usher I saw. She looked as though she knew how I felt and was honestly sad to see me go.

The kinship I felt with the hotel staff reminded me that the bartender had told me how Madiba had extended his trip to make use of the hotel’s resident personal trainer.

Madiba arrived there only able to walk short distances with his walker and would be wheeled around for longer distances. Over the month he spent there, the trainer managed to get Madiba walking again, only using his knobkerrie when things got a little wobbly. He remained Madiba’s personal trainer from then on, travelling the world with him for the next 15 years.