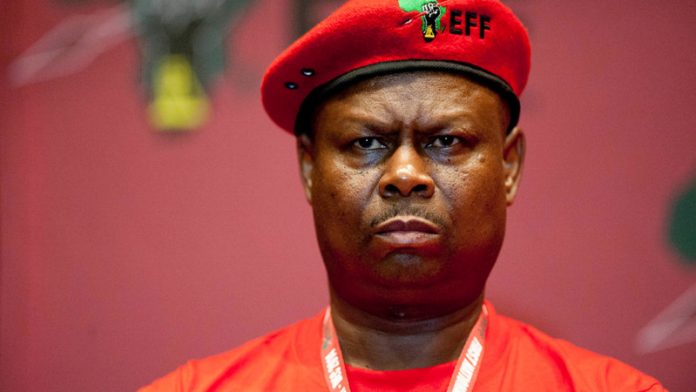 The battle for leadership positions in the Economic Freedom Fighters could end up in court after the party’s leader, Julius Malema, dismissed allegations of electoral irregularities made by the EFF’s former national co-ordinator Mpho Ramakatsa.

Ramakatsa, who claims the EFF national conference in Mangaung in December was undemocratic, unconstitutional and irregular, has given Malema a seven-day ultimatum, which expired on Thursday, to deal with all the allegations he raised or face a legal challenge.

Among other matters, Ramakatsa alleged that Malema “changed branch delegates to the national assembly to influence the outcome of the conference” and illegally altered branch audit reports and interfered with his duties as national co-ordinator.

He threatened to take the EFF to court to have the national conference, which elected Malema as president, declared invalid.

Not fazed
Malema was unfazed by Ramakatsa’s legal threats. In a seven-page response that was seen by the Mail & Guardian this week, Malema questioned the former EFF leader’s motives, saying he should have raised all the allegations earlier or during the EFF national conference in December.

“The War Council [the party’s dispute resolution committee] and Central Command Team (CCT) [its national executive committee], which you [Ramakatsa] were a member of until election of the CCT in the first EFF NPA [National People’s Assembly] was responsible for all processes that led to the [national conference].

“On various occasions, you prepared and tabled reports that pointed to the reality that the branch regional and provincial people’s assemblies that were convened in preparation for the National People’s Assembly were legitimately convened and complied to the guidelines as adopted by the CTT.

“At no stage did you as the national co-ordinator bring to the attention of the War Council and CCT that there were irregularities concerning preparations for the National People’s Assembly,” Malema wrote.

He said Ramakatsa could not have been intimidated by the peaceful EFF national conference because he was a fighter, a trained soldier of Umkhonto weSizwe, who spent time on Robben Island as a political prisoner. “You [repeatedly] state that you are fearless and never afraid of any situation, and your fearlessness could have given you the courage to raise issues prior to the National People’s Assembly,” Malema wrote.

Ongoing squabbles
The continuing squabbles in the EFF have threatened the unity of the party, which has put pressure on President Jacob Zuma in Parliament to pay back a portion of the R246-million spent on security measures at his home in Nkandla, as recommended by public protector Thuli Madonsela.

The EFF has threatened to disrupt Zuma’s State of the Nation address on February 12 if the president fails to provide a date by which he is prepared to repay the money.

It has been reported that EFF MPs are divided on the party’s plan to disrupt the address, but Malema has dismissed this as an agenda pushed by Ramakatsa and fellow EFF MP Andile Mngxitama.

In his letter, Malema warns Ramakatsa to desist from attacking the EFF leadership in public.

“We hope that these responses will assist you, and please take note that loyal and disciplined members of the EFF do not engage with internal organisational matters in the manner you did. We are aware that the recourse you threaten in your letter is court, and we are more than ready to explain and justify all the decisions taken by the CCT, War Council and NPA to the courts of the country.

“We also wish to advise that you should desist from creating imaginary complaints and send what are supposed to be internal organisational matters to the media. We are not interested in entering into a media spectacle about issues that by nature are internal,” Malema wrote.

Allegations
Malema said some of the allegations Ramakatsa made against him were what Ramakatsa had himself been accused of. He said the only time an individual was accused of influencing the outcome of a conference was when Ramakatsa insisted additional delegates be included in the Tshwane regional people’s assembly.

Malema also claimed Ramakatsa instructed the interim leadership of the EFF in the Northern Cape to alter and change the delegates to the provincial people’s assembly – “an act which led to violent disruption of the first leg of the Northern Cape provincial people’s assembly and injury of one of the Central Command Team members responsible for security”.

Mngxitama and Ramakatsa have declared war on EFF leader Julius Malema and the party’s leadership, whom they accuse of purging members perceived to be close to the two.

In an interview with the Mail & Guardian in Pretoria this week, Moonsamy rejected their claims that she has resigned as an MP because she is unhappy with the manner in which Malema is getting rid of those perceived to be dissidents.

She said the two former leaders are making divisive statements because they failed to gain enough votes to become part of the party’s top-six leadership.

Moonsamy has completed law school and wrote the board exams in 2013. She was admitted as a candidate attorney this year.

She said Ramakatsa has made “random statements” that she is going to return to the ANC, adding that Mngxitama has “purged himself” from the EFF.

In response, Ramakatsa said that Moonsamy wanted to leave the EFF prior to the party’s first national people’s assembly in December and is now using the fact that she has to complete her articles as an excuse to bow out of the party.

Ramakatsa also said Moonsamy left Parliament because she believes that some people in the top six are not experienced enough to hold their positions. He said Moonsamy believes she is more experienced than the EFF’s secretary general, Godrich Gardee, and his deputy, Hlengiwe Hlophe-Maxon.

But she rejected the claim that she had been convinced by Shivambu not to leave the party, saying the “discussion never happened”.

Moonsamy said Ramakatsa and Mngxitama had both declined nomination for leadership positions at the EFF’s national assembly in Mangaung and accused them of trying to attract attention with their pronouncements.

She said anybody who wants to lead an organisation should be in a position to unify, not divide, it.

“Any action that claims to undermine any sitting elective leadership at any level of the party is tantamount to organisational treason. I think that rebellion must be contained.”

Moonsamy derided Ramakatsa’s claims of financial mismanagement and his demand for the EFF to present its audited financial statements to him.

“How does he demand this? He is asking for audited statements but, as the first national co-ordinator, he should have initiated the audit.

Moonsamy said the party has spoken to auditors and that an audit of its national and provincial structures is under way.

She acknowledged there might be some discrepancies in the financial statements, adding that this is not because of mismanagement but that errors could have crept in.

“Look, the party is a year-and-a-half old. There has been one preliminary audit before the party turned one. There is no money. The organisation has [been] run on a very thin budget. Everything has been done on a tight scale, so there is little room for mismanagement because there isn’t much money,” she said.

She rejected speculation that she has left Parliament to go back to the ANC, saying that the ruling party had “vomited” on her and other former ANC Youth League members who are now in the EFF.