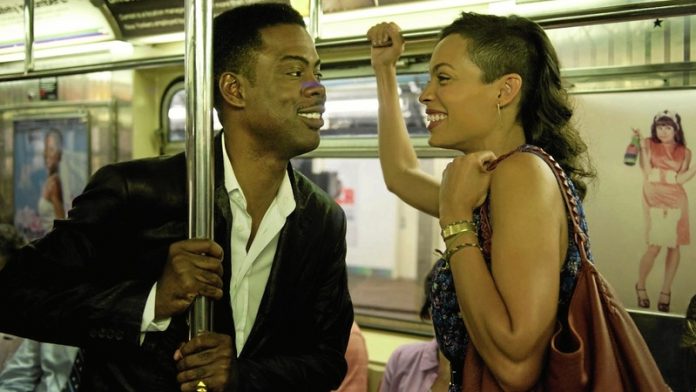 Chris Rock is intelligent, and has never been afraid to step out from behind the veil of comedy to interrogate the issues that have made for excellent stand-up content over the course of his career.

First, he directed Good Hair with just the right amount of sensitivity and humour, in an attempt to untangle the politics of beauty that would one day influence his young daughters’ self-images. Most recently he penned a candid, incisive essay on Tinsel Town for The Hollywood Reporter that laid bare the nuances of racism in the industry.

“But forget whether Hollywood is black enough,” Rock writes. “A better question is: Is Hollywood Mexican enough? You’re in LA, you’ve got to try not to hire Mexicans. It’s the most liberal town in the world, and there’s a part of it that’s kind of racist – not racist like ‘Fuck you, nigger’ racist, but just an acceptance that there’s a slave state in LA.”

Allen is trying to reinvent himself as a serious actor in the eyes of the public and has to battle Hollywood’s pigeonholing of black entertainers, a past with substance abuse he secretly fears may have been the secret to his success, and a New York Times film critic who reviles everything that Allen attempts. As part of his image makeover, he allows journalist Chelsea Brown (Rosario Dawson) to spend a day with him and write a balanced profile.

The autobiographical element of Top Five carried the promise of a sharp and witty self-awareness that Rock – as writer, director and star – comes very close to but robs us of by defaulting to lazy, banal comedic tropes.

Some of Top Five’s clichés are easier to forgive than others. At one point, Allen and Brown ditch his expensive ride for a day spent exploring “the real New York”. They buy hotdogs, frolic and jump over the turnstile into the subway before falling into each other, breathlessly, on the train.

It’s pretty obvious where the story is going from there. Much more grave is the film’s treatment and stereotyping of black women. I was horrified a mere 10 minutes in, when Andre’s longtime friend, bodyguard and driver Silk (JB Smoove) grabs a woman walking past in the street and tells her: “I love me a big girl. You move with confidence.”

Unbelievably, the woman shakes her head and giggles and Silk peppers the rest of the film with such interactions – all aimed at larger black women before the apex of his character arc: a meeting with Gabourey Sidibe at a film junket.

They exchange words that make it clear that they have a past, with the joke being pinned on the fact that he’s sexually attracted to a talented and articulate Oscar-nominated actress who is also fat.

I was reminded of a scene I caught in Vuzu Channel’s Real Husbands of Hollywood (BET) rip-off called Real Jozi A-Listers, in which Maps Maponyane tries to escape the advances of comedian Celeste Ntuli. Once again the punchline is that he’d never consider such a funny and confident woman as a prospect because he’s so light-skinned, slim and pretty and she’s not.

It’s true that none of the characters in Top Five – male or female – are particularly well developed or refreshing but Rock’s treatment of the women serves as a reminder that even the smartest men with the most incisive viewpoints on race issues are allowed to continue to be so gender-blind. And a common enemy of white hegemony does not make great allies out of black men and women in the film industry.

Last year Saturday Night Live actor Keenan Thompson controversially attributed the show’s lack of black women to the fact that they are not ready for roles and fall short at auditions.

YouTubers and trained comedians Azie Mira Dungey and Amarni Starnes filmed a response in which they discussed how white writers stereotype black female characters as either “sassy” or “ghetto”, a real deterrent for performers trying to find their niche on screen.

The problem might still be attributed to white studio executives but I’ve noticed African-American films reproduce their own stereotypes of black women.

If they’re not fat and funny (see The Nutty Professor, Tyler Perry’s Madea films), they’re too tough and angry or oozing sex.

An embarrassingly raw sex scene in the film features two nameless vixens Allen spends the night of his dreams with, before they “cry rape” and turn it into a nightmare.

Of course, it is the domain of romantic comedies to rely on problematic gender roles and relations to cushion the plot.

In that way, Top Five is no different to anything starring Kate Hudson or Katherine Heigl. This can be considered a small victory: the release of a black film that stands shoulder to shoulder with its white counterparts.

Audiences of all races will watch Top Five and relate to it. This marks a step in the right direction from comedies like Think Like a Man that are written for, marketed directly to, and expect to make their money only from black audiences.

Is Hannibal Buress a one-trick pony?