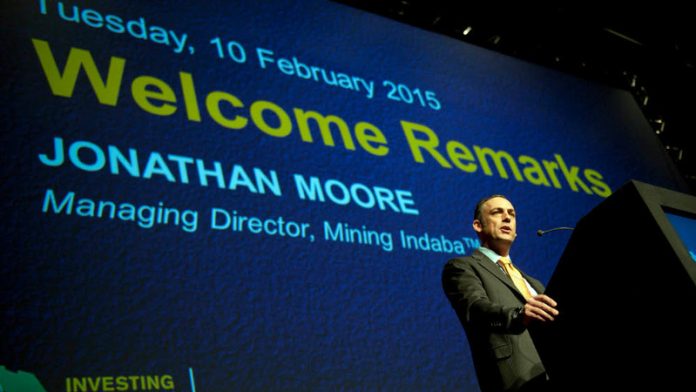 Africa remains the big growth story, so much so that the annual Mining Indaba in Cape Town bills itself as the world’s largest investment conference. More than 7 000 delegates attend it, with exhibitors displaying their stuff in the main hall and hospitality suites competing to fête well-heeled delegates.

The indaba, which is held in the Cape Town International Convention Centre, has become so entrenched since its formation 21 years ago that it has sparked the Alternative Mining Indaba in the suburb of Woodstock, which seeks to discuss and understand the social effects of mining, accountability, transparency and good governance.

At the Mining Indaba, a succession of speakers supply nonstop information in the large main hall and in smaller auditoriums. The delegates, mostly suited men, are drawn from 110 countries in six continents, including 47 delegations from the rest of Africa. Notably conspicuous, also with their own hospitality suites, are large delegations of Canadians and Australians keen to use their mining experience to expand their presence in Africa.

Little joy
The indaba is associated with big money, shown not least by the fact that it is sponsored by more than 400 companies, including some of the world’s biggest by market capitalisation.

But for all the trappings of wealth and success, not to mention high projected growth rates, the mood was pessimistic, even downbeat, with words such as “crisis” peppering the conversation.

The indaba’s chief executive, Jonathan Moore, told delegates at the opening that commodity prices, as measured by a Bloomberg index, were 17% down on last year. The price of base metal iron ore fell from $180 a tonne to just $60 over the past three years. In the past year, iron ore, not unlike oil, halved in price.

Exploration and investment are down. Statistics compiled by Deloitte in the State of Mining in Africa report show that investment in mineral exploration is down 50% compared with 2012.

Deloitte’s data shows that, in the case of 14 countries that make up 80% of the continent’s total, all have been in decline since 2012.

“The continent is slowing in future mineral development. Considering the current prices of many commodities, the outlook for growth looks very gloomy indeed,” say the authors of the report, John Woods and Andrew Lane.

They say that 30 projects are scheduled to come on line in Africa by 2018. These include nine copper mines, four gold mines, three coal mines, three platinum mines, two uranium mines, one iron ore mine, one nickel mine, one zinc mine and one potash mine.

A dominant recent narrative is that mining investment has been flowing into the rest of Africa rather than to South Africa, in part because of regulatory and energy uncertainty, but also because many South African mining operations are relatively mature. This means production costs are typically higher.

But if you think that mining investment is flooding out of South Africa, think again. The authors say the 30 new projects amount to a total investment of $18-billion.

“We estimate the total forward spend on these projects to be approximately $10.5-billion, with South Africa taking 29%, DRC [Democratic Republic of Congo] 23%, Mauritania 8%, Namibia 8%, Zimbabwe 8% and Zambia 7%.”

The report shows that South Africa heads nine countries in terms of the ease of doing business, followed by Ghana, Botswana, Namibia, Zambia, Mozambique, Tanzania, Zimbabwe and the DRC.

Most of these countries, with the exception of Mozambique, the authors note, have seen their ease-of-doing-business ratings decline rather than improve over the past year.

Notwithstanding Eskom’s current problems and poor prognosis for the next few years, energy is the big differentiator between South Africa and its African mining competitors. Poor infrastructure, including energy provision, means that mines usually have to supply their own power.

A World Bank report, The Power of the Mine, predicts that mining demand for power will triple to 23 gigawatts by 2020. It says: “Africa needs power to grow its economies and enhance the welfare of its people. Power for all is still a long distance away – two-thirds of the population remains without electricity and enterprises rank electricity as a top constraint to doing business.”

The report says, without investment, sub-Saharan Africa will see the number of people without electricity increase from 590-million in 2013 to 655-million by 2030. But mining in the region has spent $15.3-billion installing 1?600 megawatts for its own use since 2000. None of this power has found its way to the national grids.

The authors say this is a loss for everyone – people, utilities, mines and national economies. They argue that, instead of going it alone, it would be better for mines to set themselves up as anchor tenants for power utilities, which could use these mines to develop a grid to provide widespread electricity for all at a lower, shared cost.

“Generally the mining sector and governments agree infrastructure development is critical for the growth of the mining sector. Well-maintained and appropriately sized capacity in rail, ports, power, roads and communication leads to more economic reliability, and maintenance of lower costs for mining operations.”

Their report shows that infrastructure is being developed in sub-Saharan Africa. Surveying the period between 2003 to 2030, they estimate $317-billion will be spent on energy and power, $186-billion on rail, $87-billion on ports and the relatively small amount of $50-billion on mining. This, they say, excludes Rio Tinto’s $20-billion Simandou project in Guinea.

Source of funds
The authors say that “mining companies and governments across Africa are at the sharp end of investor, labour, mining community and media scrutiny”.

It is worth noting where the funding of African mining projects comes from. The Deloitte report analysed the source of funds for 29 projects currently in development. “The Toronto Stock Exchange is funding 29% of the projects, followed by the Hong Kong Stock Exchange funding 17% and the National Stock Exchange of India funding 10%.”

The JSE is a distant eighth after the Australian, Euronext (Paris) and Russian exchanges.

Africa is not universally seen to have only an upside. A report by Deloitte, Australian Investment into Africa, says the value of listed Australian mining investment fell by 27.3% last year. Ebola in West Africa, which halted operations, and the five-month platinum strike in South Africa were the primary reasons for the loss of value.

Some of the world’s biggest companies by market capitalisation sponsor the indaba.

If delegates were hoping for light at the end of the mining tunnel, the macroeconomists who speculated on the future did not lift the gloom. Get ready for the long haul was the message; commodity prices could take several years before they recover. The fall in prices is caused by supply exceeding demand, the key factor being the slowing Chinese economy.

One speaker, Jim O’Neill, was less bearish than most and argued that, if you take a long view over several decades, things are not that bad now. (He is famous for popularising emerging markets and coined the term Bric – Brazil, China, India and China – which later, when South Africa joined, became Brics.)

The state of global economic health is best seen in Europe, a giant that usually drives demand, but at present, in O’Neill’s terms, is a “laggard”.

He argued that “we are doing better than we think”, one positive being the low oil price, but he said the days of China clocking up double-digit growth were gone. That was the old China in which policymakers pursued growth at all cost. They were much more focused now on the quality of growth.

The new China consumed more relative to its own production, he said, predicting that China would grow by between 5.5% and 7.5% for the rest of the decade.

If we were looking for high growth, we were more likely to find it in India, O’Neill said, which he expects will grow faster than China.

With little to no room for optimism, some talk was about whether commodity prices have hit the bottom. The optimists maintain that prices are as low as they can go. The pessimists worry they will fall further. But, for most, the challenge appears to be to survive the present fallout to be able to benefit when prices do recover.

There is a strong focus on running operations and managing costs as efficiently as possible.

For Chris Griffiths, chief executive of Anglo Platinum, this is about modernisation – a package of measures to reduce costs by rationalising operations and putting high-cost operations up for sale.

Griffiths said platinum prices had not recovered from the lows following the 2008 collapse, but that costs had been rising at a higher rate than consumer inflation. Innovation, which was both possible and affordable, was the solution– an active move to mechanisation, using very low, remote-controlled vehicles in the narrow stopes.

He sees this as resulting in fewer jobs, although they will attract higher wages. He also sees a growth in service jobs associated with the higher-tech operations.

Fewer jobs will undoubtedly create new labour tension, which will challenge Griffiths, who wants to modernise labour relations. He said the combative “them and us” needed to end and be replaced by partnerships with employees, communities, unions and nongovernmental organisations.

Regulation
Deloitte’s report says: “Governance, mining legislation and the tax law seem to be broadly stabilising, with the exception of Zambia and Zimbabwe, which increased their tax royalty rates twice in the past six years.”

But Randgold Resources’ chief executive Mark Bristow said: “Mining can play a major part in Africa realising its potential but our potential to contribute fully to the continent’s continuing transformation is handicapped by an irresponsible short-term culture, which is an unfortunate legacy of the boom years.

“The harsh truth of the matter is that the mining sector has inflicted debt, impairments and write-downs on itself without making provision for its own long-term future, and is in a sorry state.

“In fact, even at current prices, and this applies to gold in particular, the industry is not viable without a major reinvention. Yet, even now, almost all Africa’s mining countries are revising their mining codes and regulations to increase their share of the miners’ revenues.

“To put it bluntly, they are demanding more money from an industry that is basically insolvent,” Bristow said.