The struggle for liberation and land needs you 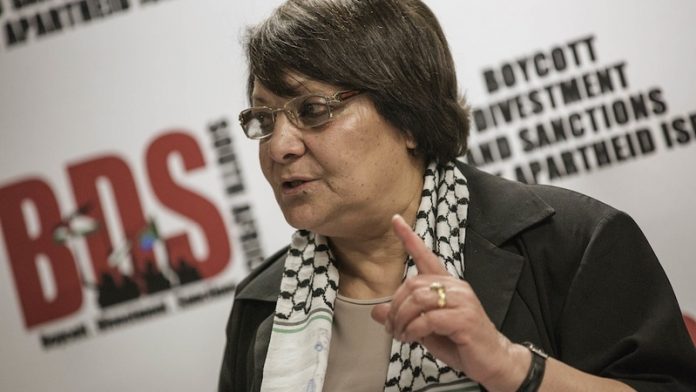 The struggle of the people of South Africa to liberate themselves from apartheid has always been entwined with the struggle of the Palestinian people for our own liberation from colonialism, racism, occupation and oppression.

Throughout the decades of the struggle of the people of South Africa, the Palestinian people and their liberation movement were allies and supporters, from the halls of the United Nations to the Palestinian refugee camps in Lebanon, where freedom fighters from South Africa and Palestine trained side by side.

Today, the people of South Africa repeatedly express their support for the Palestinian struggle for liberation, return and self-determination. Last year, hundreds of thousands of people took to the streets in Cape Town – when Israeli bombs rained down destruction on Gaza – expressing a growing commitment to the boycott, divestment and sanctions (BDS) campaign, and calling for the international isolation of Israel for its ongoing crimes against the Palestinians and the violation of our rights.

The ANC, the trade union federation Cosatu, BDS South Africa, veterans of the anti-apartheid struggle and the popular movements stand firmly with Palestine and have endorsed the call for boycotts and sanctions.

Today, millions of Palestinians in Palestine, Lebanon, Jordan and Syria are still refugees. We are still under occupation, and we are still struggling for return and liberation – for a free Palestine.

We have always known that Israel has the forces of colonialism and injustice on its side – South Africa’s former apartheid regime was one such key friend, along with the United States, Canada and the other Western imperial powers. But the Palestinians have the popular movements of the world standing with us, as we stand with them in their own struggles for justice.

The BDS campaign is a key tool of the international solidarity movements standing with Palestine, responding to the call of the Palestinian people to cut off the political, military and financial support that arms, funds and strengthens the occupier and the coloniser, and to support our liberation movement by isolating the occupier.

This is a tactic of struggle that achieved great success in mobilising people around the world to act to support the movement to end racist oppression in South Africa.

We Palestinians know that our struggle is not simply local in scope: it is an international struggle for justice. BDS is a meaningful method of international support for the Palestinian people at all levels; it helps our movement to continue, and sustains our resistance and our revolution.

Refusing to buy products in a store or cancelling a corporate contract will not liberate Palestine. Nothing but the Palestinian struggle and resistance in all of its forms, from refusing the orders of an occupation soldier to marching in protests to armed struggle, will liberate Palestine.

But the international movement of people of conscience can help significantly to change the balance of power in favour of the Palestinian people to achieve justice, despite a powerful opponent.

This international struggle is a real alternative to the failed system of US-sponsored “negotiations”, which for more than two decades have brought nothing to the Palestinian people except extended occupation, brutal wars, the construction of colonies and mass imprisonment. They demand that we, the Palestinian people, must accept apartheid as a solution, to accept inequality and injustice, on a permanent basis, for the majority of Palestinians to be denied their right to return.

The BDS movement presents an alternative for international support and solidarity – support for the Palestinian people’s struggle to free our political prisoners such as Ahmad Sa’adat and Marwan Barghouthi, and thousands of other Palestinians behind bars. BDS supports the Palestinian refugees’ return, equality and justice, an end to occupation and apartheid, and freedom from racist oppression.

We look forward to a vision of a liberated Palestine – a democratic Palestine, in our entire land, with equality for all. We do not see a future of oppression and injustice, and we will not accept apartheid as a solution.

We urge you to support Palestinian liberation and continue BDS campaigns at all levels – academic, cultural, economic and military – to help us make that vision of liberation a reality.

Leila Khaled is a Palestinian activist. She visited South Africa as a guest of BDS.