Been there, done that, says Pitso 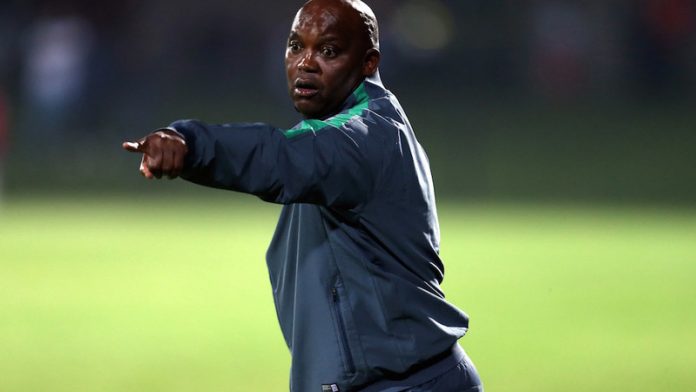 Although the three frontrunners will not be playing in the Premier Soccer League this weekend, the focus on the chase for the championship is gaining in intensity with 10 rounds and 10 weeks to go before the conclusion of the season.

It is now the overwhelming subject of excited conjecture, with the battle to catch Kaizer Chiefs at the head of the standings well under way and the delicious prospect of a thrilling finale to a tough season is now very much on the cards.

“We don’t want a scenario where the league finishes too early, do we?” Mamelodi Sundowns coach Pitso Mosimane jokingly asked reporters on Tuesday night in Durban, after his club moved back into second place after a hard-fought 1-0 win over bottom-placed AmaZulu.

Victory for Sundowns left them 10 points adrift of Chiefs, with a game in hand, and their coach in an unusually ebullient mood.

Already, in the matter of just over a fortnight, Chiefs have seen their runaway lead whittled down from 15 points and the pressure ratcheted up several notches.

Although it might be a touch early to accuse them of looking jittery, Chiefs have not exactly exuded confidence since returning to action after the recent break. It has been in contrast with two successive league wins each for Sundowns, Bidvest Wits and Orlando Pirates, who have restarted their respective campaigns with flying colours.

So much so, Mosimane could not help but slip a prediction through his normally guarded analysis of the overall league scenario. “I believe we can win the league,” he said.

Cantering home
And why not? Last season they were 11 points behind Chiefs and yet cantered home to the title with Sundowns’ near record-breaking winning run being as much the catalyst for success as the way Chiefs buckled under the pressure.

“We have experience of this, we’ve been through this route. It’s a tough road,” he added. But the big difference this time round is the participation of all of the leading teams in continental competition in coming weeks, with the intrusion of playing tough games in either the African Champions League or the African Confederation Cup. Last year Sundowns did not have that distraction.

And even if they have a talented squad with the possibility of rotating to keep players as fresh as possible for both the league challenge and their ambition of continental success, it’s near impossible to juggle the various combinations successfully and get the desired results.

That is why, when Sundowns should be fielding reserves on Saturday for what is supposed to be a routine assignment against opposition from the tiny Seychelles in the Champions League, Mosimane says he will be picking a near first-choice line-up as the tie against part-timers St Michel United is precariously placed, after a 1-1 draw in the first leg earlier this month.

“We had to come from behind to get a draw. We thought we’d go there [to the Seychelles] and look at the white beach sand and blue waters but instead we got the shock of our lives.”

Three days after Saturday’s return leg in Atteridgeville, Sundowns must play Wits in a match on Tuesday night at the Milpark Stadium that is the first of several key encounters over the next weeks that could alter the course of the championship chase dramatically.

Different picture
Although all the talk is of a scenario of Chiefs seeking to hold off Sundowns once again, Mosimane has a different picture in mind. He sees three teams rather than two in the battle for league honours.

“Don’t write Wits off. They are dark horses. They are keeping everyone on their toes. Last season they ran out of steam but not before they gave us a hand by taking points off Chiefs. I know Hunty [Wits coach Gavin Hunt] never wants to lose to Chiefs so maybe he can do us a favour again.”

Sundowns and Wits sit on 37 points with Sundowns having the better goal difference and a game in hand. Chiefs are on 47. “We are all running our own race; there is no point worrying about things you cannot control. Our goal is to break our record of the number of points.”

Sundowns won the title with 65 points last season, the highest number in a single season since the league was reduced to 16 teams in 2002. “If anyone else gets more than 65 points, we’ll shake their hands and say ‘well done’. Can we improve the record? It’s really tight now. You can see how difficult the games are. We are nervous all the time. We haven’t lost [in the league] since August but still we are nervous.”