Protocols that bend at ethnicity 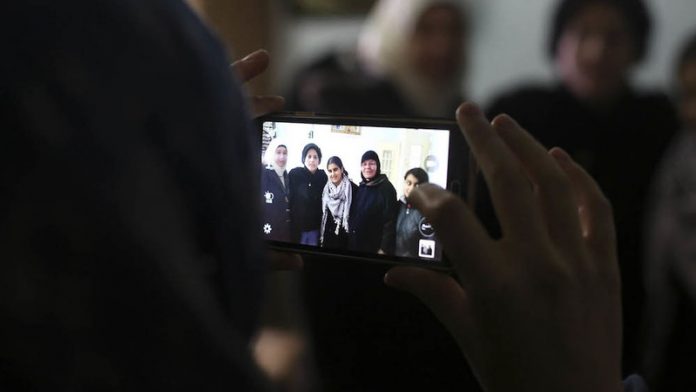 An account by a 14-year-old Palestinian girl of her arrest, interrogation and 44-day detention after she was accused of throwing stones has once again raised questions about the treatment of Palestinian minors in the Israeli military court system.

Before her release this month, Malak al-Khatib was the youngest girl among 150 Palestinian minors currently jailed by Israel.

At a reception last week to mark her return home to the West Bank village of Beitin, near Ramallah, Malak and her family continued to insist she was innocent and had only admitted to the charges of throwing stones and carrying a knife because she had felt intimidated in custody.

“I had had an English test the morning I was arrested [December 31],” Malak told the Guardian. “I finished and I had no more school that day so I was walking close to Route 60” – the main highway running through the West Bank.

Israeli security forces and Malak’s family dispute what happened next. According to the Israeli indictment and her own guilty plea made as part of a plea bargain, Malak was arrested close to the road, while picking up a stone, wearing a mask and carrying a knife. Malak now denies the claims.

No political points
The teenager was taken to the Binyamin interrogation and detention centre, where she was questioned by a male officer without the presence of her family. “I was alone in Binyamin in a room with the interrogator,” Malak said. In her interview with the Guardian, she spoke only of her own experiences without making any political points.

“He told me if I confessed they would bring my family and I would be released. He said: ‘You were throwing rocks. You had a knife.’ But I had the pencil that I used in school.”

Whether she threw stones or not – an activity broadly socially sanctioned by Palestinian society as a form of resistance to the Israeli occupation, but unusual for girls – her case has cast a spotlight on the treatment of Palestinian minors.

“I was scared,” she said of her interrogation. “I said: ‘I shouldn’t be here. I should be at home. I want my mum and dad.’ The officer said that I needed to sign the affidavit of what I had said. But it was in Hebrew.

“I asked him to read it but he said ‘It’s just what you said, and your parents are outside.’ I thought I was going to be released.”

According to official statements from the Israeli police, Malak was offered the opportunity to speak to a lawyer by phone, which she declined.

In many respects Malak’s experience was not unusual in an Israeli military court system that applies rules to Palestinian minors that are different to those applied in Israel’s civil court to Israeli minors.

Israeli minors are entitled to have an adult present during questioning and are not allowed to be questioned at night except in exceptional circumstances. Pre-trial detention tends to be the exception, not the rule. But for Palestinian minors arrested on the West Bank, the experience is very different.

Critics charge that the military court system – in the way it deals with Palestinian children accused of offences such as stone throwing – can act as “an assembly line” whose processes push young defendants towards confession and plea bargains to avoid long, drawn-out cases during which time spent in detention can be far longer than the sentence handed down for a quick guilty plea.

According to a report released by Defence for Children International Palestine this month, children were asked to sign statements written in Hebrew, a language they did not understand, in a quarter of 107 recent cases.

And although Malak did see her parents briefly in the corridor at the interrogation centre, she was transferred to HaSharon prison near Netanya instead of going home. “I was taken in a jeep with a woman soldier and a driver. I was handcuffed in the car and my feet were shackled. I wasn’t told where I was going.

“When I got to the jail there was a woman who asked me some questions like, ‘You’re not going to kill yourself or harm yourself?’ Then she gave me another piece of paper written in Hebrew to sign.”

Malak was kept in a cell with three Palestinian girls aged between 16 and 18 who, she says, looked after her. “You know, it could get really boring. So we would sew together. There were a few classes, Hebrew and religion. But that was it.”

Several court hearings
The process of court hearings was no less arduous and troubling. Over the course of several hearings, Malak said she would be woken at the prison at 2am to be taken to Ofer military court, near Ramallah. The journey, via other prisons to collect more detainees, could take several hours, during which she would be shackled.

Often, she says, she would not be delivered back until just before midnight. “Every time they told me I had to go to court I thought I would go crazy,” she recalled. “It was so tiring.”

Eventually she agreed to a plea bargain on the three counts against her – “attempting to throw objects at a transportation route, possessing a knife and throwing objects at a person or at property” – and sentenced to two months in jail and a hefty fine. Taken back to HaSharon prison to finish her sentence, she was not permitted visits by her family.

In response to Malak’s claims, an Israeli military spokesman said: “Malak al-Khatib was convicted, based on her confession to the military, of rock hurling and carrying a knife with the intent to stab a soldier. Throughout the legal proceedings, she was represented by a lawyer and her parents were present in the court.

“In accordance with Israeli law, a minor has the right to have their parent present during interrogation only if they are not ‘under arrest’ or suspected of committing a security offence. Since Khatib was questioned whilst under arrest, and was suspected of committing security offences, she was not entitled, under the law in Israel or the law in Judea and Samaria [the biblical term for the West Bank] to have her parents present during her interrogation.”

Sarit Michaeli of the Israeli human rights group B’Tselem said Malak’s account was unsurprising. “Israeli youth law acknowledges that, regardless of what you are charged with, a minor experiences the legal process in a different way to an adult and requires an adult’s presence and interrogation by someone trained in youth interrogation.

“Despite pushing for the same rule to apply [to Palestinian minors], the closest we have got is a statement from the Ofer appeal court suggesting the same spirit of Israeli youth law should apply in military courts.

“It is not just small rights that are being violated. There is an assembly line of plea bargains pushing children to guilty pleas because the punishment they will receive will be lower than the amount of time they will spend in prison if they are held until the end of legal proceedings if there are evidential hearings that go on for months.

“In cases like stone throwing – where you might expect a sentence of three to six months – it is not worth it for a defendant in detention.”

Moments before her release, Malak had no idea that she was to be freed. “A woman warder came to my cell and said, ‘Come to the office’. Then they told me I was to be released.” – © Guardian News & Media 2015