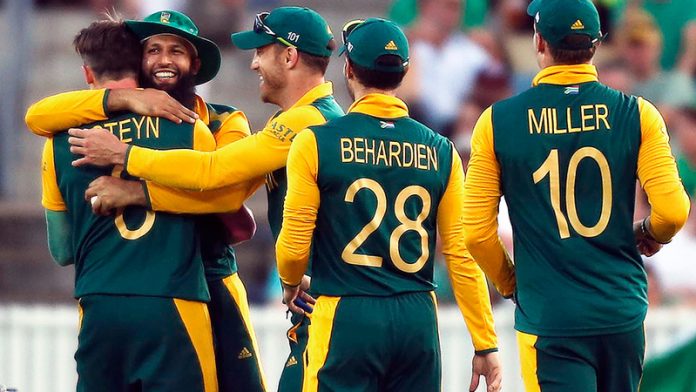 South Africa got one foot into the World Cup quarter-finals by batting past the 400-run mark for the second successive match to hand Ireland a thumping defeat by 201 runs with five overs to spare at Manuka Oval on Tuesday.

Hashim Amla hit his highest One Day International (ODI) score with a majestic 159 and Faf du Plessis grabbed a century to drive the Proteas to 411 for four before Ireland, despite some stiff resistance from their middle and lower orders, were dismissed for 210.

The Irish were unbeaten in the tournament coming into this Pool B clash but were simply outclassed in all departments by the in-form South Africans, who crushed West Indies by 257 runs in Sydney on Friday.

That victory had been set up by AB de Villiers’s 162 in a total of 408 for five but on Tuesday it was opener Amla who led the way as South Africa fell just two runs short of the World Cup record innings tally.

The record would surely have fallen had Irish off-spinner Andy McBrine not removed Amla and de Villiers (24), the two top-ranked batsmen in the world, in three balls in the 42nd over.

Run-a-ball
Amla had been dropped on 10 and should have been run out on 104 but otherwise batted with his trademark calmness and at one stage it looked like he would match Chris Gayle’s double century on the same pitch last Tuesday.

As measured as his captain de Villiers is explosive, Amla reached his 20th ODI century at a run-a-ball in a partnership of 247 with Du Plessis – a record second-wicket stand for South Africa.

The 31-year-old’s 159 came off 128 balls and he had hit 16 fours and four sixes by the time he holed out to Ed Joyce in the deep, 36 overs after the former England batsman had dropped him at midwicket off Kevin O’Brien’s first delivery.

Amla has scored his 20 ODI centuries in fewer innings than any other batsman, taking 108 knocks compared to the 133 it took India’s Virat Kohli to reach the mark.

Sorely tested
Du Plessis made his 109 from as many balls for his fourth ODI century, while Rilee Rossouw confirmed his fine form with a second successive quickfire innings of 61.

Ireland’s renown as a side capable of chasing big targets was always going to be sorely tested by a South African bowling unit led by Dale Steyn, who took 2-39 in his 100th one-day international.

The paceman, bowling at speeds approaching the 150kph mark, picked up two early wickets and Kyle Abbott pitched in with three to reduce Ireland to 48-5 in the 11th over.

Andrew Balbirnie and Kevin O’Brien stopped the rot with a 81-run partnership that ended when the former was caught in the deep by Rossouw off Morne Morkel for 58.

O’Brien batted on as de Villiers gave all but three of the team a bowl but departed for 48 when Abbott (4-21) returned to claim his first four-wicket haul in one-day internationals.

“Amla is still the rock and will always be that for us. He was incredible. Hopefully that form can continue for the rest of the tour,” said de Villiers, whose team are virtually certain of a place in the quarter-finals after a third win in four matches.

“It was a good game. We did it our way. We follow our game plans and the guys set it up very nicely up top for our middle order.” – Reuters, AFP