Jiba: Nxasana accuses police of ‘assuming the role of defence’ 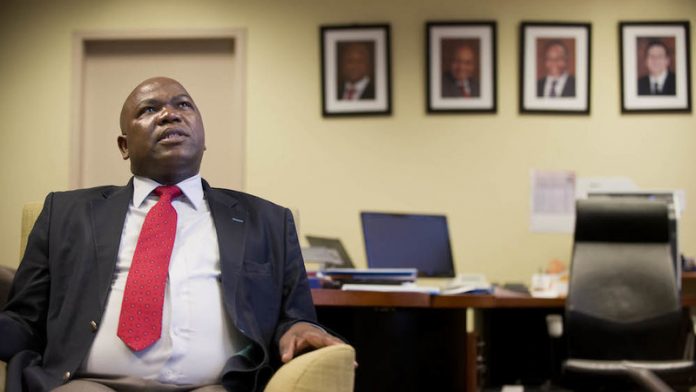 National director of Public Prosecutions (NDPP), Mxolisi Nxasana, says a perception is being created that the police are trying to protect his deputy, Nomgcobo Jiba, from prosecution.

Nxasana addressed the media at a press conference on Friday morning.

This week, a senior police official served a summons on Jiba related to an investigation into her conduct. But Jiba was not there to receive the summons, which Nxasana tried to deliver to her.

The police denied that the summons was issued, saying their case was not ready to go to court. “It is our view that the NPA, who are also complainants in the matter, jumped the gun when they issued a summons against advocate Jiba,” said SAPS spokesperson Lieutenant-General Solomon Makgale on Wednesday.

Nxasana was asked on Friday if he believed the police were trying to protect Jiba. “I don’t believe that she’s protected. But a perception is created, and it’s unavoidable, that she’s being protected at all costs,” Nxasana said.

Prosecution
He said the idea that a matter could only proceed to court once the investigation was complete was not true. “Matters in court, although I’m not condoning it, are enrolled and they get postponed time and time again, for further investigation. Therefore any suggestion that the matter can only be enrolled once its been investigated is misleading. It’s the responsibility of the investigating officer to make a decision as to whether the matter could be prosecuted,” Nxasana said.

He accused the police of “assuming the role of defence”. Nxasana said Jiba “knows her rights”, and if she felt that the summons issued against her was false, that he hoped charges would be laid and those responsible would be brought to book.

‘Very strange’ saga
Nxasana said the idea that Jiba was “awol” this week did not emanate from the National Prosecuting Authority (NPA). He said that on the morning the summons was issued, he had tried to contact her in an unrelated matter, but she was not at work. But this did not mean she was “absent without leave”. On the whole, Nxasana said he found the entire saga “very strange”.

“I was hoping that the police as our partners would tell us if they are ready to prosecute this matter. The police have now assumed the role of being the defence.

“I can only hope that after all this – the impression created is that the police were merely instructed by the prosecutor to take the summons – that if the conduct of the prosecutor (in Jiba’s matter) is found wanting, which I strongly deny, he’ll have also to face the might of the law.

“And if the police officers and others acted (involved in the investigation into Jiba) unlawfully I expect stern actions be taken against them.”

Summons
Questions still remain about who was responsible for delivering the summons to Jiba. Nxasana said, “I attempted to serve the summons upon her. But my understanding of the law is that that is one of the manners to effect service upon a person. My understanding is that the summons has been served upon her. And if she doesn’t appear in court I have no doubt in my mind that the prosecutor will do what is necessary and the court will be the final arbiter.

“When she refused to accept the summons, I wrote on the summons and witness wrote what happened.