Leaders smoked out in land conflict 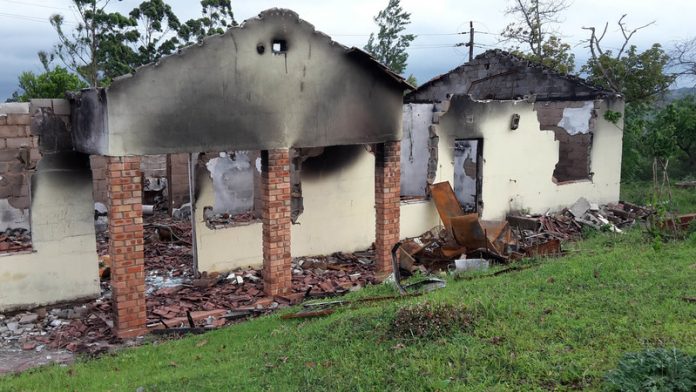 Three leaders of a communal land association at ­loggerheads with a local traditional leader over land ownership in Melmoth, KwaZulu-Natal, are in hiding after their houses were burnt down.

Such conflicts, between traditional authorities and a postapartheid ­structures legislated to promote democratic rural land ownership, will be brought into sharp focus when the Constitutional Court rules on who owns the rights to a supposedly platinum-rich area of North West province (See “Ownership claims spark friction”, below).

William Mnyandu (82), chairperson of the Ekuthuleni Communal Property Association, and two other leaders, Mnyandu’s brother Walter and Charles Nxumalo, have lived in hiding for the past 10 months.

The men say they can only return to their village if they agree to relinquish their land ownership rights to Chief Thandazani Zulu.

Mnyandu’s house was first attacked on August 17 2014, when a mob stoned it, breaking a window. A week later the houses of the three leaders were burnt to the ground.

“About 150 chickens and 50 bags of maize were stolen. They left me with nothing,” he said.

Mnyandu said it saddened him that he might never return to the home where he had lived all his life, but he would never give up what belonged to the community.

He said the call for the communal property association to return the land “was made mostly by people who did not belong to the association, but were allegedly placed on the land by the chief”.

Melmoth police were asked about the status of the arson case, but had not responded at the time of going to print.

The association, formed in 2004, represents about 224 members, all of whom have lived in Ekuthuleni for generations, Mnyandu said.

Its claim to the 1?100 hectares was approved by the department of rural development and land reform; the title deeds were handed over in 2005.

At the heart of the conflict are Zulu’s claims that the land belongs to his family and that, in securing title, the communal property association had gone behind the back of the Entembeni Tribal Authority.

“It wasn’t me”
Zulu told amaBhungane he had nothing to do with what was happening at Ekuthuleni. “That place is far from me; all I know is houses were burnt down and there was a community conflict,” he said.

However, amaBhungane has seen a letter he wrote to the Melmoth police station in 2004 asking officers to stop a meeting called by the communal property association.

In the letter, in isiZulu, he complains the meeting is due to take place on “the land of [his] forefathers” but he has been told nothing about it. He says this will cause instability, as people who do not want peace will stir up the community, saying members must choose whether they want to respect the chief.

Mnyandu claimed the chief had incited violence against the association at various community meetings since 2004, but on August 22 last year at Mashobeni, things came to a head.

Zulu denied attending any community meetings or inciting violence, despite amaBhungane pointing out to him that local newspapers that covered the meetings quoted him as saying that the communal property association leaders must be dealt with and removed.

He did confirm, however, that he had called the Mnyandu brothers and Nxumalo to a meeting at his offices last August to discuss “community grievances”.

“People [from Ekuthuleni] came to me and said the CPA (communal property association) was blocking development in the area … I wanted to talk to them about that but they never pitched,” the chief said.

Mnyandu said they did not attend because they feared for their safety. “We never blocked any progress – why would we do that? So we were suspicious of the purpose of this meeting,” he said.

Another meeting, facilitated by the police, was called a week later.

“The police came to get us, but when we got there, there were about 400 people who were not from our area shouting our names. We refused to get out of the police cars. They were shouting that we had three days to leave the village,” said Mnyandu.

A mining giant in the midst
Another community source, who asked not to be identified, said the dispute had been aggravated by the presence of Indian mining giant Jindal. Zulu had given Jindal permission to prospect for iron ore without consulting the community of nearby Makhasaneni village, and he wanted Ekuthuleni’s support.

“The people of Makhasaneni are a headache for Jindal, which plans to apply for mining rights. The last thing it needs is another village causing trouble,” said the source.

“Jindal has to negotiate with the CPA as the landowner.”

“We just see people moving on to our land and settling in. When we voice concerns it appears that we don’t want people living there, which is not true,” Mnyandu said.

As the communal property association didn’t wish to evict people, Zulu used this tactic “to build [a] support base here and sow divisions”.

Mnyandu said his family arrived at Ekuthuleni in 1934, when he was one year old.

“At the time my parents were paying rent to the Lutheran Church, which owned the land … the mission moved out of the area in 1971,” said Mnyandu.

Although the association received the title deeds in 2005, its quest to secure recognition as occupants of the land started in 1997 when Mnyandu applied to the land reform department for a permit as a record of their occupational rights.

“Before title deeds are given, there is a verification process. We were issued with the deeds as our claim was legitimate,” Mnyandu said.

Friction between communities and their traditional leaders over the ownership of rural land will be brought into sharp focus when the Constitutional Court rules on who holds the rights to a supposedly platinum-rich area of North West province that partially covers the Pilanesberg Reserve.

The case, heard late last month, involves an application by the Bakgatla-ba-Kgafela community for leave to appeal against a judgment of the Supreme Court of Appeal.

The appeal court upheld the claim of the Bakgatla-ba-Kgafela traditional authority and its leader, Chief Nyalala Pilane, that the communal property association had no legal standing as it was never permanently registered. The community argues that it won title to the 150?000 hectare area through a land claim.

The communal property association (CPA) was formed in 2007, and the department of rural development and land reform accepted its registration.

But because the traditional authorities wanted a trust to be formed under their control rather than a CPA, the association was issued a provisional registration certificate to give the parties time to resolve their dispute.

According to the CPA Act, provisional associations lapse after a year if their status is not made permanent or is not extended.

The CPA approached the department again late in 2007, requesting the association be made permanent. The department refused.

The CPA then went to the Land Claims Court, where it was successfully registered and declared permanent, but the appeal court overturned this decision.

Devastating effects
Donna Hornby of the Institute for Poverty, Land and Agrarian Studies blamed the department for failing to empower CPAs.

Hornby said, when gaps appear in the official legitimacy of associations, other local forces, often traditional authorities, frequently move in to claim land they have never previously controlled.

The effects of such conflict can be devastating, she said, pointing to the battle between the Ekuthuleni CPA and the Ntembeni Traditional Authority.

She added that, if Minister Gugile Nkwinti had any respect for the rights of ordinary people, “he would take immediate action to fulfil the department’s legal duty to provide the full range of support [that] CPAs are legally entitled to, against the illegitimate claims of many traditional authorities”.

The department was asked to comment early on Tuesday this week, but did not respond. –Tabelo Timse