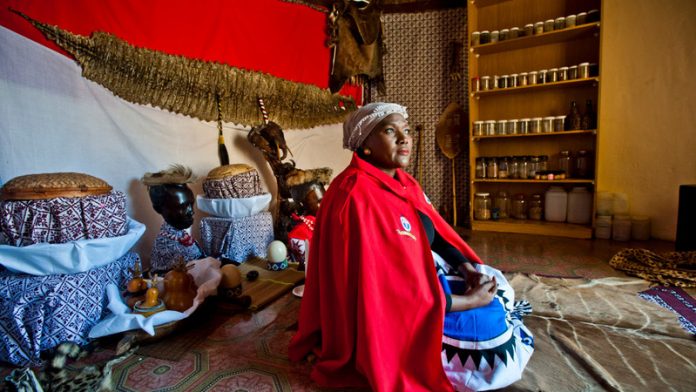 For centuries, sangomas have healed illness and divined misfortune. Estimates suggest there are about 200 000 sangomas in South Africa alone, greatly outnumbering Western medical practitioners put at just fewer than 40 000. Now, for the first time, the state will regulate sangomas.

This plan has been labelled medical apartheid by some who see it as a way of restricting their practice. The Medicines and Related Substances Amendment Bill 2014, now before Parliament, will provide a regulatory framework and oversight for the use of medicines, including complementary medicines.

The Bill establishes the South African Health Products Regulatory Authority, which will have wide powers to regulate traditional medicines. There are also proposals to develop a regulatory body of traditional healers to work with the department of health.

This will raise questions about the status and legality of those operating outside the system in the traditional way.

Anthropologist Professor Robert Thornton, of the University of the Witwatersrand, who is also knowledgeable about sangomas, says the regulatory moves stem “partly out of a desire to control sangomas and partly due to a misunderstanding of their role”.

“The government is operating under an erroneous assumption, that African traditional healing is like Chinese healing, or Ayurvedic, or Unani. It is not.”

Philosophy and ideas
Chinese medicine, for example, is based on science and the use of medicines but sangoma practices are rooted in philosophy and ideas. “That everybody influences everybody else. Ideas like ubuntu. Because illness is a consequence of other people’s influence on you.

“Every sangoma has their own power, amandla. What you’re looking for is a powerful person,” says Thornton.

Sangomas do not operate regularised pharmaceutical dispensaries. They use divination, not diagnosis, with the ancestors as a central facet. Their power comes from many things – rocks, plants, muti, ancestors, bones. The thinking is that muti, when it takes the form of medicinal herbs to be ingested, is not necessarily what is prescribed. And when it is, the muti given varies from person to person.

Gogo Phakathi, a white sangoma who works in Soweto, says the muti dispensed depends on the person’s situation. She claims her medication doesn’t interfere with Western medicine.

“If I have a patient that is on TB treatment, or [anti]retrovirals for HIV … they still continue with that.”

She makes sure they go regularly to the clinic, or goes with them.

“I don’t tell them not to use the government treatment. It is very important because it affects the body of that specific person.

“But there are African treatments that can assist with addressing the immune system.”

‘Complex system’
Thornton says: “It’s a complex system of knowledge because, although you learn the properties of these plants, to use them you have to see them as independent agents that come into your mind through dreams. So you don’t dream the plant, the plant dreams you. You have to feel that the plant wants to help you, or it won’t.”

He believes regulation is fundamentally misconceived.

Along with regulation comes research into the healing properties of South African medicinal plants.

Anthropologist Robert Thornton says the regulatory moves stem ‘partly out of a desire to control sangomas and partly due to a misunderstanding of their role’. (Madelene Cronje, M&G)

It also makes little sense to ask sangomas for a list of their treatments and test these for efficacy. That is not how it works, he says. And in any case, they’re not going to do that.

“There have been many efforts to set up nurseries for propagating and growing plants that are used for muti, but with only limited success. Most sangomas do not believe that these plants have much efficacy because they do not grow independently in the bush.

“It has to be a wild plant, because the idea of the wild is very powerful. If you go out on Sunday around Johannesburg, you’re going to see people worshipping in the wild. All over.

“Now the wild just means any place that’s not fenced, that has some sort of free grass and bush growing. It can be a mine dump. It can be somewhere along the highway, and you’ll see circles of people dressed in white and green and blue.”

Cultural clash
Sangomas represent a cultural clash, the skeleton in the closet for the government elite who are seeking to control them. “They’re reacting on widely held missionary ideas of sangomas as African doctors, because the missionaries were doctors. This was one of their big ‘ins’ for converting people.

“They set themselves up as opposing witch doctors [saying] ‘We’re real doctors, those are witch doctors, in other words false doctors’.

“So they also set themselves up as having ‘real’ religion as opposed to false religion or no religion.

“Many people brought up in the Christian tradition, as virtually all of the ANC [were], fear sangomas. But they’re caught between their nationalism, their sort of Africanism and their fears,” Thornton says.

“So, while they see sangomas as the deep African culture of which they don’t really know anything, they also fear it and feel that, if it can be regulated, then it can become part of a nationalist Africanist agenda. But only if it’s regulated.”

‘Not good enough’
Phepsile Maseko is a practising sangoma and national co-ordinator of the Traditional Healers’ Organisation. She claims that the government has not recognised traditional healers as they promised in 1994. Traditional medicine is seen as “not good enough and is not medicine enough” by the ANC, who are fostering discrimination for “the good of their pockets”, she says.

Testing traditional medicines began in April at the herbal research unit of the Tshwane University of Technology.

“It [testing] would benefit big pharma, but probably not South African pharma – it will be German firms, as in the past. It’s not going to be South African sangomas,” Thornton says.

“So the more this is promoted, actually the more paranoid sangomas become, because they get the idea that their knowledge is going to be stolen, utilised and make vast fortunes for German companies. And it will.”

Sangoma regulation is not just about following the money. Thornton believes a factor behind regularising sangomas are the chiefs. The chiefs and the sangomas hold real power, and compete, in the rural areas in particular.

‘People taking chances’
Joe Maila, the spokesperson for the department of health, rejects this and says they don’t want to control the healers.

“Government needs to know who is a traditional healer and who is not, because as you know there are people who are taking chances.

“Government is saying we need to find a way of making sure that we have some kind of relationship with the traditional healers in the country to provide healthcare services. If someone has symptoms of HIV or Aids, they must also be able to refer them to us,” Maila says.

Maseko wants to work with the government but on an equal footing. She believes research and development will give them more status.

“The traditional medicine directorate [in the department of health] has for many years been put up as just a stooge,” she says. She describes it as window dressing for the World Health Organisation.

‘No programmes’
“There are no programmes about South African traditional medicine that get implemented by this particular directorate.

“When you have to go to a meeting with this department, you find out that they’re talking about issues about HIV and Aids, issues of vaccination, issues of family planning. They’re not talking about the core and fundamental issues that affect the development of our sector.

“These are people that do not have the interest in their heart of our own profession. But in fact they’re using every avenue … to continue to have hegemony over medicine. And you can’t allow that to happen in this day and age.”

Maseko says those outside of the profession do not have the know–ledge of methodologies and treatments used to regulate her sector. She also stresses the importance of spiritual upliftment in treating people, in addition to the body and the mind.

“What you realise today is that people gained independence, people gained democracy, but unfortunately inside the people are still bleeding. There has not been proper healing of these people.

“Now this is why South Africa has turned out to be such a violent country. We can do that healing – the body, the mind and the spirit,” Maseko says.