Students hit out at college of disgrace 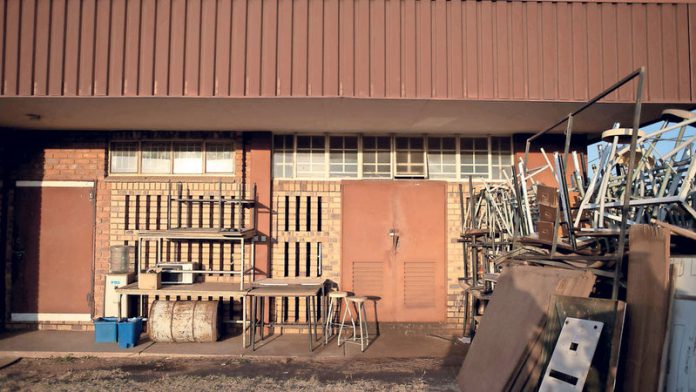 Big rats, badly lit corridors, stench from a neglected swimming pool and eggs-and-pap for dinner are features of the life of ­students at the Soshanguve South campus of Tshwane North College.

A group of students, who pleaded with the Mail & Guardian to visit the campus to view their living and studying conditions, counted the swimming pool as one example of the ­structural decay at the institution.

“It’s smelly and obviously not healthy,” said one of the students, asking for anonymity. “It’s been like this for a long time. We found it like this [at the beginning of 2014].”

The informal tour revealed the extent of the disrepair on the campus, a state of affairs students attribute to long-standing maladministration by management of the college.

Not only has poor management allowed campus infrastructure to deteriorate, they said, it also sentences students on government ­bursaries to poverty and squatting.

“We’re hungry,” said another student. “They have not given us our meal allowances, covered by the bursary, since the year started. Now students are squatting because those who are supposed to get their off-campus accommodation allowance have not been allocated the money.

“There has not even been [transport] money up until now for those students who stay very far. But we’re expected to attend 80% of our classes [to qualify for full bursary settlement].”

Said another: “Students are suffering. If you come to campus on a Friday night, you’ll see expensive cars parked outside. Girls are dating sugar daddies because they don’t get their bursary money.”

The National Student Financial Aid Scheme (NSFAS) administers this bursary scheme. The state agency has set aside R73-million for the college this year.

Nzimande wants college enrolments to soar to four million by 2030, from a figure his ministry says now stands at more than 750 000. In the same period, university student headcounts are expected to increase to 1.5-million from just over a million.

The government has been pumping billions of rands into colleges in its campaign to persuade school-leavers to see them as institutions of choice rather than second-best, fallback options.

But conditions at the Tshwane North college’s Soshanguve South campus lift the lid on how the institutions remain inferior to universities.

Hotplate stoves lie dangerously on the floors of male hostel rooms. One student, who was frying eggs to be eaten with pap, raised the level of desperation: “Just imagine eating eggs and pap. It’s tough here, but we’re supposedly on bursary.”

Only two communal shower taps work in the hostel for more than a hundred students. All other taps “haven’t been fixed for a long time”, the students said.

“We’re expected to shower here, where the broken doors mean anyone can walk in while you’re bathing. Even girls can just walk in,” said a male student.

Another student, pointing to a hole at the base of his door, said: “We live like pigs on this campus. Prisoners enjoy better conditions than us. They don’t fumigate, so there are now big rats in our rooms. You see, they even eat doors.”

The hostel has numerous broken windows. There is no lighting in the corridors, plunging the residence into darkness after dusk.

Security is another concern for students: guards are posted only at the entrance gate and students demonstrated that a key to one room opens five doors.

The cafeteria is another sad story, with its wrecked ceiling and doors. Tall grass covers the field of the sports stadium, rendering it unusable. Students call it a forest.

“There are high levels of pregnancy in college because students don’t have sports facilities,” said a student.

Sethusha, who has been at the college for nine months, promised major renovations at the campus. “I don’t want to go back into the past and try and [speak for] … the past administration [and] why they didn’t repair, but since I came in I’ve approved requisitions to repair all those things.

“We’re going to repair and renovate the hostel, put in new stoves and new beds for students. We have approved that. What’s left now is action.”

The stadium and cafeteria will be renovated, Sethusha said. “We haven’t got people on site to start working yet, but tenders have been finalised.”

Sethusha does not deny that bursary allowances are yet to be allocated to students, citing “serious capacity issues” in the college’s administration office.

This resulted in student application forms not being completed properly. “We then appointed a bursary manager and five temporary staff members earlier this year. They recently completed an operation called ‘Correct the Application Form’, which was also a tedious process.

“We do acknowledge that having not been able to disburse the money did really disadvantage students, but we’re correcting it. We’re looking forward to start paying for 2015 as soon as we’re done.”

Kagisho Mamabolo, spokesperson for the NSFAS, said the agency was alarmed by the state of affairs at the college. “NSFAS is concerned that the college … failed to submit claims that are correct and on time.”

Out of “concern that students suffer when colleges do not claim”, Mamabolo said the scheme wrote to the higher education and training department last month to intervene.

Mamabolo revealed that nearly R22-million, which is 30% of the total funds for the college, was channelled to it at the beginning of the year.

“We must send a strong message that there is no excuse why students must suffer when the college has received 30% upfront,” he said.

“This money must be used to assist the students while the college ensures that it submits documents or claims to NSFAS accordingly.”

Bheki Mahlobo, acting deputy director general responsible for colleges in the higher education department, said the department inherited a number of “challenges” at the colleges.

“One of them – and this is definitely not the case on all campuses and colleges – is the inadequate management of infrastructure by colleges.”

The 50 institutions, with 260 campuses across the country, were run by provincial education departments until this year.

“We live like pigs on this campus. Prisoners enjoy better conditions than us”