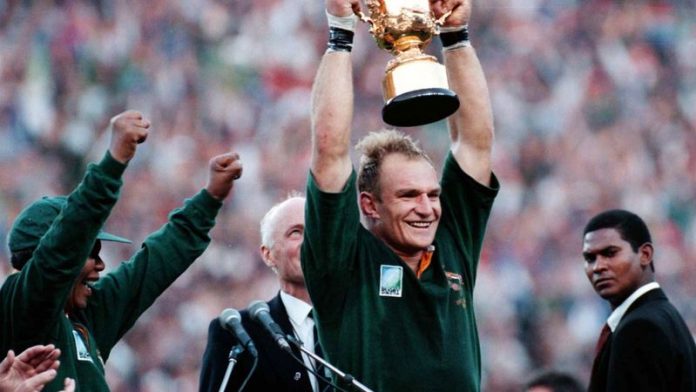 The team walked through the tunnel with victorious captain Francois Pienaar rolling iconic scrumhalf Joost van der Westhuizen onto the field in a wheelchair with the rest of the squad in tow.

The men joined for a photograph in front of a banner that read “Still One Team, Still One Country” as a scrum of photographers snapped away.

Twenty years have left its marks on the 1995 World Cup heroes but the memories remain vivid in their minds.

The memories came flashing back as he walked onto the field, said Mark Andrews, who has not watched the match since the Boks beat the All Blacks on July 24 1995.

“The reason why for me is that I’ve got memories of that day and there is the old saying ‘the older I get the better I was’,” Andrews said.

“On that day in 1995 I was bulletproof, I was Superman in a Springbok jersey, I probably played ‘k*k’ but I’ve got good memories of how good we were as a team.

“As time goes by the memories become sweeter and I am not that excited to watch it as the reality will set in and I see I was actually pretty average that day.”

The euphoria and spirit of that memorable day on which former president Nelson Mandela, wearing a Springbok jersey, presented the Webb Ellis trophy to Pienaar was tangible on Wednesday.

“I woke up this morning and I welled up, it dawned on me that 20 years ago I went through that cocktail of emotions,” Pienaar said as he fought back the tears.

“We didn’t know that it would be that big, we had a sense that it was something extraordinary but in our wildest dreams we couldn’t have imagined what happened 20 years ago.”

Pienaar said the afternoon screening of the match would also be the first time that he would watch the game.

“You don’t want the romance to be tainted, it is almost selfish but the thought was that it was so special that anything after this almost doesn’t matter,” he said.

It was a bitter-sweet reunion with the absence of Ruben Kruger, coach Kitch Christie, and Mandela, who have died since that momentous day.

“If it wasn’t for Madiba and his magic, this country would not have been together,” Pienaar said.

“The team adopted the slogan and wanted to be one team, for one country, so we are going to miss him tonight and his Madiba Magic.”

Joel Stranksy, who slotted the famous drop goal in extra-time to clinch the victory, said it was emotional meeting up with his old team-mates.

“I think the emotions I feel is from seeing the other guys, when you go through the kind of adventure – the training, the fitness, the hardship – you build a great camaraderie,” Stransky said.

“There is an element of suffering and from the suffering, the victory and the greater achievement, you build a great camaraderie.”

It was also a tough day for the players as they were confronted by the image of a frail Van der Westhuizen, who was suffering motor neuron disease.

“The suffering he is going through at the moment, his fight is more painful, we obviously miss Kitch and Ruben tremendously but to see Joost suffering is not so nice,” Stransky said. – Sport24

EDITORIAL: Boks a hope for all of us

United SA behind Boks once again

Joost van der Westhuizen: A mixture of mischief and instinct