Paris, where the brandy beckons 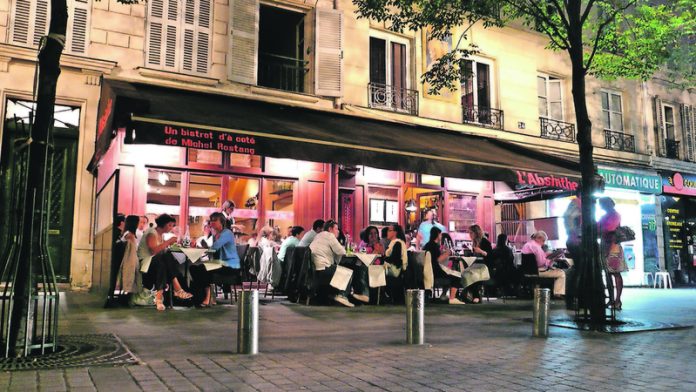 Cold air greets me as I step outside Charles de Gaulle Airport. I thought I’d dodged trench-coat weather in Johannesburg but I discover it’s 4°C at 6am in springtime Paris.

“I don’t think I packed enough warm clothes,” says a fellow journalist. We are being chaperoned by Cognac brand Martell ahead of its 300th anniversary celebrations in Paris.

Although the Martell Cognac House was born in France in 1715, cognac has a home in Africa too.

In the 16th century, Dutch settlers arrived at what today we call the Cognac region in France to buy items such as wine and to preserve the wine on their long journey home, it was distilled twice to produce brandewijn.

Now in South Africa when you say the word “brandy”, an image of an oom mixing his brandy with coke might be the first thing that pops up. Nothing about that picture says sophistication but when you attach the word “cognac” to brandy, then an illusion of class is created.

In 2014, KWV, in partnership with the French House of Maison Charpentier, unveiled South Africa’s “first and only” XO (Extra Old) Cognac produced under a South African brand name.

KWV House of Brandy in Worcester is renowned for being the biggest brandy distillery in the southern hemisphere.

If we get technical, the term brandy refers to grape-based spirits and, while the European legislation requires those spirits to be aged for at least six months, South Africa requires that all brandies must be aged for a minimum of three years.

Cognac and a pot-still brandy are produced in a similar way – they are toasted in French oak barrels. But real French brandy must come from the Cognac region in France.

It’s 2pm and the sun has decided to come out and play in the City of Lights. The Parisian streets are flooded with locals, tourists take snapshots of the landmarks such as the Palais Garnier and tour buses wait on the side of the road.

Situated away from the bustling background, we have our first meal in the city at the cosy L’Absinthe restaurant, about ten minutes from the Palais Garnier area. The restaurant is a refreshing, serene spot to enjoy lunch – a change from the cafés that line the streets and have vehicles and traffic lights as their backdrops or the distractions supplied by trendy Parisians going about their day.

We opt to have our meal upstairs, where the set-up is quite intimate, with fewer tables. The fine dining restaurant’s lunch menu is poached small ravioli, wild mushrooms and fresh herbs; roast duckling fillet marinated with fresh coriander; and iced soufflé with pear for dessert.

The portions are filling and tasty. Instead of doing the French thing, which is having wine with our meal, we opt for a glass of Cognac.

It’s my first taste – the Cognac is a fairly familiar smack of bitter sweetness on my tongue, much like the brandy I have had in South Africa, but it’s smoother, warm and spicy with woody notes.

When enjoying Cognac with meals, it’s best to opt for rich meals such as duck or pasta served with wild mushrooms, for example, because the food will soften the alcohol. Other Cognac pairing foods include roasted vegetables, lobster and chocolate.

Over the years popular songs and videos have packaged Cognac as a must-have item if you want to be perceived as a moneyed individual. In South Africa, Cognac prices range from R300 to R20 000 a bottle. Pot-stilled brandy and French Cognac play in the same market and compete for the same local consumers.

A paper titled South African Brandy in an International Context, by Cape wine master Derek Ramsden (2012) and published on the Cape Wine Academy website, said there was an apparent trend that showed a decline in the sales of brandy locally – at a time when “South African brandy is riding high on the back of international success and greater domestic market presence with the increasing numbers of Cape wineries producing their own brandy”.

Despite a drop in sales in the spirits market, local brandy has received great international recognition because of the numerous accolades it has collected over time – such as KWV Grape Brandy 12YO (12-year-old) winning a worldwide brandy trophy at the International Wine and Spirit Competition in 2014.

Says Nick Holdcroft, Distell’s brandy ambassador, “The entire spirits segment has been under pressure as consumers have had less disposable income. Not all brandy products have been in decline, though. Some notable exceptions have come from the specialty, connoisseur segment of the market as more South Africans get to hear of the world-class performance of our products at international shows.”

Holdcroft says South Africa has won the worldwide best brandy 12 times over the past 14 years. And with the introduction of new French Cognac products in the local market, such as Martell Cognac, in October, he is confident the local brandies will be able to hold their own in the market.

“Wherever Cognac is enjoyed there exists a possible market for South Africa’s premium pot-still brandies, so we take the view that the more people that enjoy brandy, be it Cape pot-still brandy or a French Cognac, the bigger the category for brandy will become,” he says.

Cognac suffered its own drop in worldwide sales in 2014, largely because of a drop in exports to China, Fin24 reported. China is one of the world’s major consumers of Cognac. But the spirit in Paris remains the drink of choice, according to Plaza Athénée’s bar manager, Thierry Hernandez, who is famous for his creative cocktails at the luxury hotel.

Hernandez treated my colleagues and me to a class in mixology, the art of mixing drinks. He says his customers often request Cognac, and enjoy it neat without any mixers, even though a Cognac cocktail is quite legitimate.

Hernandez, whose bar has quirky drink menus printed on small cards with different characters on them, showed me how to make my own cocktail.

Although I didn’t spill a single drop of alcohol while shaking it up at the bar counter, I don’t think I’d survive as a barman with my slow pace. Nevertheless I came out the session with a decent cocktail.