Let Madonsela’s report do the talking 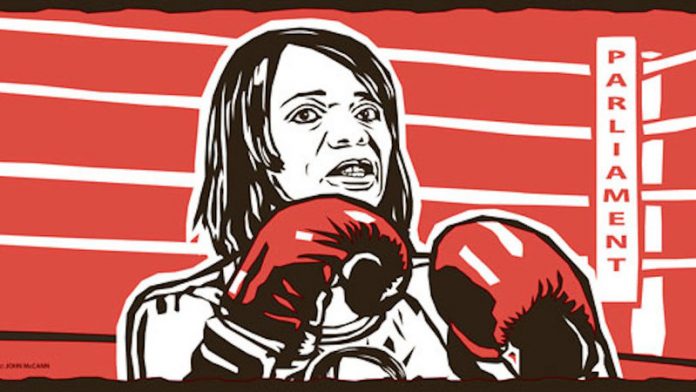 In real life, unlike in sport, winning and losing are not always clear-cut and separate categories. A win today can metamorphose into a bitter loss tomorrow and vice versa.

The public protector may have erred and, in that sense “lost”, tactically and politically at least, by holding the Monday press conference. It is not so much the content of the briefing as it is the fact of it. It was, in my view, redundant if not ill-advised.

No new information was added to the body of knowledge in circulation regarding Nkandla – especially that emanating from the office of the public protector. It may also have been a mistake for the advocate to allow herself and her office to be drawn on the Nkandla parliamentary ad hoc committee debates and ruling party jibes on the scale and intensity that she has.

It is in this regard that the public protector could learn a thing or two from first-century Roman governor Pontius Pilate. At some point during the trial of Jesus, the leaders of the noisy crowd are said to have demanded that Pilate revise the contents of a notice he had written about the soon-to-be-executed accused. Pilate, a character generally portrayed as weak and indecisive, perhaps a tad unfairly, especially by Hollywood, produced a response that was as astute and durable as it has remained quotable across the centuries. “What I have written, I have written,” he said defiantly as he refused to add or remove from his original notice at the behest of an irrational, if bloodthirsty, throng.

Amid the cacophony of reviews, opinions, distortions, parliamentary and unparliamentary debates, the response and mantra of the public protector to misunderstanding, provocation and insult ought simply to be: “What I have written, I have written.”

The public protector should give the readers of her report the latitude to understand, misunderstand and critique it. Perhaps even the public protector does not quite appreciate the courageous and epoch-making potential of her Secure in Comfort report. I wonder if she realises quite how significant this report may become in future narratives of the democratic maturation of our young nation.

It is possible that we will often, if not always, remember that once upon a time there was a public protector who was brave and forthright enough to investigate and, when compelled by the law to do so, not afraid to point a finger at the highest office in the land.

Madonsela should derive some satisfaction from the fact that, since 1994, no chapter nine institution report has rattled the powers that be in the way her Nkandla report has done. She should take courage from the fact that, of all the reports generated on Nkandla so far, hers may not be beyond question (what report is?), but it is the only truly independent report on the table. With due respect and their contents notwithstanding, all other reports are by persons or bodies reporting to politicians, directly or indirectly.

Yet she does not seem to appreciate fully the immense contribution she has made already. Increasingly, she seems unable to resist the temptation to respond personally to each misinterpretation and to the pettiest jibe from politicians peeved by her report. At this stage of the dispute, her energies would be better spent differently.

The point is that the vitriolic attacks directed at the office and person of the public protector, the “irrational bickering”, which she decries, are testimony to the success of her efforts.

Such is the nature of chapter nine institutions that, given the advocacy and democracy-nurturing dimension of their mandate, they have to take a long-term view of success. To this end, they should be willing to settle for partial and nonlinear forms of success. The very fact that both the executive and Parliament have wrestled so long and so hard over the Nkandla matter and over her report is part of the success the public protector should take careful note of. Part of that success is that she, with some help from civil society and the media, has consistently managed to keep this matter in the national consciousness for more than five years.

At each of the security cluster ministerial briefings we have been served, at each parliamentary debate (including the violent and chaotic ones), on the occasion of the launching of a report by Police Minister Nathi Nhleko, during the recent on-site visits to Nkandla by the ad hoc committee and the media, the proverbial elephant in the room has always been the report of the public protector. No investigation, no report, no set of observations or comments have become the main reference point and none have come to frame the Nkandla debate like the report of the public protector.

There is little doubt that her interjections are based on well-considered legal principles. At least that is how they come across. But she cannot allow herself to spar, punch for punch, with politicians. When she does that, she runs the risk of being accused, even by those who stand firmly behind her, of lacking in discernment and wisdom, the very traits she has so far shown herself to possess abundantly. Wisdom and discernment rather than legal or procedural correctness is what is at issue at this time.

If Madonsela were to be shown to have lapses of wisdom and discernment, the cost for her and her office would be substantial and serious. Until recently, the attacks on her person and her office have been from familiar quarters – predictable, shallow, ludicrous and unsubstantiated. These include the suggestion that she “has misled the nation”, that she is engaged in “political posturing” or that she is a CIA agent.

Of course, one understands her frustrations over running an inadequately funded office whose mandate is so weighty. One understands her dismay over her report being misunderstood, misinterpreted and even distorted.

Even the president, in a recent letter to her, seems to misunderstand her report, alleging that she requested him to “engage the minister of police with a view to determine a fair amount to be paid by him in respect of the items identified in this report as not listed in the security list and not reasonably linked to security”. As she has swiftly pointed out, the report says the president should determine “the reasonable cost of the measures implemented by the DPW [department of public works] at his private residence that do not relate to security”, assisted by the treasury and the South African Police Service.

Yet Madonsela’s biggest tactical mistake in all this may have been her publicly stated need to be interviewed by the parliamentary ad hoc committee, ostensibly so that she can contest, among others, what she sees as the distortions of the police minister’s report.

Why such a hunger to contest a report she has called an “illegal charade”? Armed with the knowledge of her thirst for an interview in Parliament, the ruling party-dominated ad hoc committee could not resist the opportunity and the pleasure of not inviting her.

In her 2012 letter to her 16-year-old self, published in the Oprah Winfrey magazine O, our beloved public protector writes, among other things, these nuggets of wisdom: “I’m writing to tell you to relax because you are a perfect expression of God’s magnificence … you are perfect for your life’s purpose.”

No one could have said it better. Except perhaps to add that the public protector should continue engaging the president as she must and, if all else fails, and as the very last resort, consider seeking legal remedy. For now, the key word and the essential advice for her is captured in a word – “relax”.

Madonsela should chill out and avoid the mud pit of party political wrestling like the plague. She should trust ugogo Dlamini – whose protector and defender her office is – to read her report with understanding, to become the champion of the principles in it and to distinguish it from other reports and comments currently in circulation.

In Africa, more people will die as a result of what we are doing to prevent Covid-19 than will be saved by doing it
Read more
Advertising