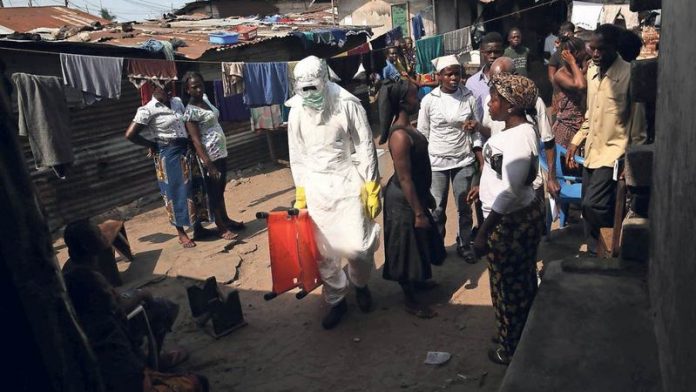 Fatimatu was dead. Mohamed Conte, a member of the Red Cross Ebola burial team, had lowered her corpse into the ground. But when he returned to the van to take off his protective clothing, she stood defiantly in front of him, an apparition.

“‘Isn’t that Fatimatu?’ I shouted to my colleagues. But they couldn’t see her,” Conte said.

The psychological effect of Ebola on aid workers, coupled with community stigmatisation, has left many of them to suffer alone, with some being driven to self-harm and alcoholism.

Ebola has killed more than 11 000 in Guinea, Liberia and Sierra Leone. Unsafe practices, such as washing the deceased, have contributed to up to 80% of new Ebola cases, according to the World Health Organisation.

In Sierra Leone, where the number of new cases is considerably lower than at the epidemic’s peak in 2014, the government says Ebola teams must continue providing safe and dignified burials for all, regardless of whether they had Ebola.

Since July last year, the Red Cross has buried more than 18 500 people in Sierra Leone while Smart, a consortium of Christian charities also working on Ebola, has buried about 16 000 people in the West African nation.

The teams regularly walk more than 16km a day, crossing rivers in the rainy season with heavy equipment on their backs to reach remote villages. The physical toll on their bodies deepens the mental scars.

Augustine Lansana, a 24-year-old student, was traumatised when he had to bury his friend on Christmas Day. The images terrorised him for months to come.

“Now, I go with alcohol just to forget myself. I can’t sleep and I have no appetite. And at times, people say I look like a violent man, because I have no smile,” he said.

Zena Awad, a psychologist from the Swedish Red Cross on a mission to Sierra Leone, said reactions to stress are similar whether in a conflict zone or during an epidemic, and have to be dealt with early to stop any negative behaviour becoming the norm.

An initial group of 35 Red Cross staffers have gone on a three-day course on how to provide support to colleagues using positive coping mechanisms such as eating healthily, sleeping well, taking time to unwind and identifying a friend to turn to.

“Without this, they might turn to negative coping mechanisms such as substance use, violence, unprotected sex and other risk-taking behaviour as a result of not knowing how to deal with traumatic experiences,” said Awad, who said the first 35 will pass on what they learned to members of their teams in local offices.

Mariama Manneh, a 24-year-old tourism student, signed up when she saw how many women were dying from Ebola. She woke up most nights, afraid of retribution from the corpses she buried. But help was at hand.

“I don’t regret joining the burial team, because I get a lot of support from my colleagues. We crack jokes, and help each other through. The people I work with are more than friends, they’re like brothers,” said Manneh.

However, Awad says, much more needs to be done, including the creation of a referral system and full psychological support for serious cases as well as the reintegration of burial teams into their communities so they can return to having a normal life.

Conte, Lansana and Manneh feel abandoned by friends and families and the nights are still tough. But it has not all been in vain.

“The government has recognised our service to the nation and even though our communities stigmatise us, they also respect the important work that we are doing on their behalf, and that makes me proud,” said Conte. – © Guardian News & Media 2015.

Covid-19: Lessons from the zombie apocalypse