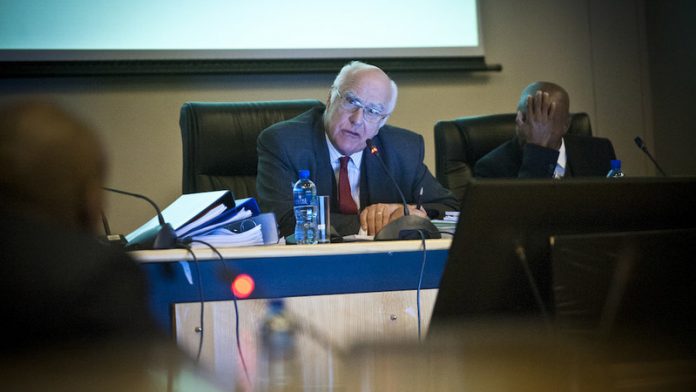 Dumisa Ntsebeza SC is completely offside to suggest a pro-Zuma bias on the part of retired judge of appeal in his report of the Farlam commission of inquiry into incidents at Marikana in August 2012.

It is most unbecoming of Ntsebeza to raise the innuendo of bias on the part of Judge Ian Farlam at a public meeting at Marikana on the third anniversary of the killing of 34 striking miners by the police. The state-sponsored violence towards mineworkers was a repetition of the unsung history of the 1922 and 1946 incidents of the same kind.

It is not even true, notwithstanding Ntsebeza’s initial assertion, that Farlam was the only judge to find for President Jacob Zuma in the Thint versus Zuma search and seizure case; the learned judge was joined by his colleague Judge Tom Cloete in his dissent in that appeal. In other litigation involving Zuma as a litigant, the record shows Farlam found against Zuma.

The presidency is right to describe Ntsebeza’s utterances as shocking. All three commissioners were unanimous in their findings.

If Ntsebeza had any basis for reasonably apprehending bias on the part of Farlam, based upon his track record as a judge or his relationship with the president, the appropriate time for raising the matter would have been before the commission commenced its work, not after it ended. He knows this is the legal position and is more than mischievous in his inaccurate anecdotal comment to the crowd on August 16.

Ntsebeza, in subsequent media interviews, presumably given in a failed attempt to contain the damage he wrought, has let it be known he regards the report of the commission as a “disgrace”. This is a more than odd assertion, coming as it does from one of the senior counsel who relies upon the findings of the commission in the particulars of a claim he signed on August 8 for victims of the killings, just eight days before his ill-considered public remarks.

The entire claim has thoughtfully been placed on the website of the Socio-Economic Rights Institute of South Africa ([email protected]). For present purposes a brief extract suffices:

This extract from the pleading evidences a very sensible reliance upon what is called the McCann principle in the relevant jurisprudence and in the report of the commission. This is how researcher David Bruce sets out to explain the precepts involved: “The report refers to what it calls the McCann principle, which ‘requires the planners of policing operations where force may possibly be used to plan and command the operations in such a way as to minimise the risk that lethal force will be used’.

Far from excoriating the report and baselessly defaming its author, Ntsebeza ought to show some gratitude for its findings in relation to the McCann principle. The application of the principle to the facts will render it well-nigh impossible for the state to contest liability for his clients’ claims other than to quibble about the quantum of damages involved.

Indeed, given the commission’s endorsement of the applicability of the McCann principle and its centrality to the resolution of the civil claims for damages that are now being commenced, the state would be well advised to formally admit liability for such damages as can be proved by each and every victim.

It is also, under the rules of court, open to the state to make its own assessment of the amount of each claim and to pay into court a tendered amount in full and final settlement of each victim’s claim. This will reduce the costs involved, speed up the resolution of the claims and put the claimants on notice that they will be held liable for such costs as are incurred as a result of their failure to accept reasonable amounts of compensation tendered by the state.

In the proper application of the McCann principle, the findings of the commission will be central to the achievement of closure and the payment of compensation to the victims.

It is necessary to point out that an executive commission of inquiry is no more than a fact-finding exercise on the topic of its mandate and with due regard to its terms of reference. No one is bound by the findings of fact or the recommendations of a commission. The Ginwala commission, for example, found that Vusi Pikoli is a fit and proper person to be national director of public prosecutions.

The executive and legislative branches of government did not accept this finding, and he was dismissed. In subsequent litigation, Pikoli was paid suitable compensation for his wrongful dismissal and the finding of the Ginwala commission turned out to be correct.

Some strange dynamic is at play. Ntsebeza, then a brand-new Zuma appointee to the Judicial Service Commission, earned notoriety in the past for letting it be known that, although he personally supported Dikgang Moseneke, then and now the deputy chief justice, for promotion to chief justice, he would vote for Zuma’s choice, Mogoeng Mogoeng.

Ntsebeza ought to know better than to sound off with such unfounded critical venom just a few days after he used what he now describes as the disgraceful Marikana commission’s findings as the basis for the claim he has been instructed to pursue on behalf of his clients.

He owes Farlam a public apology.

Paul Hoffman SC is a director of Accountability Now