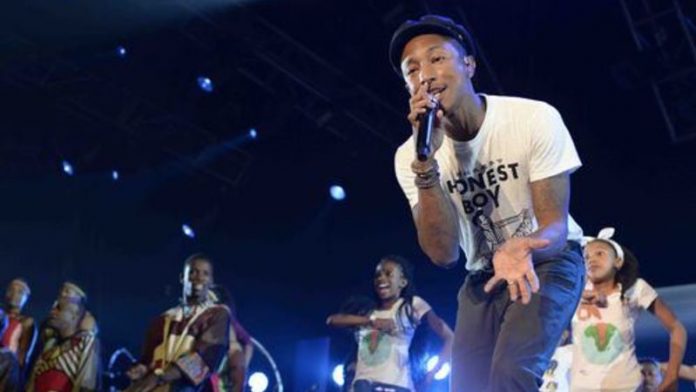 With a music career that spans over 20 years, the multi-instrumentalist, singer-rapper, fashion designer and producer Pharrell Williams gave a rousing performance in Johannesburg on Wednesday.

Alongside dancers and singers from the group The Baes and his band, the 42-year-old’s show comprised of songs like Good Morning and Marilyn Monroe from his latest second solo album, Girl, and hits such as  his 2003 single Frontin’.

As his model wife Helen Lasichanh watched from the side of the stage, the star also performed songs he has produced, such as Kendrick Lamar’s  epic track Alright, and some of the music he made co-producing with legendary production duo The Neptunes: Nelly’s Hot ‘n Here, Busta Rhymes’s Pass the Courvoisier and Just Wanna Love You by Jay Z. Despite expressing that he had issues with his voice earlier  in the day, Pharrell’s vocal abilities seemed to match his recorded work.

On the eve of Heritage Day, some audience members joined the energetic and youthful-looking musician Pharrell for a few songs. And later the Happy singer surprised the crowd when he invited on stage Shae Haley of N*E*R*D, a three-man band made up of Pharrell, Haley and Chad Hugo. While on stage, the two belted out N*E*R*D classics like Rock Star and Lapdance.

Towards the end of the show, the father of one invoked the memory of former president Nelson Mandela before performing his latest single Freedom, saying: “The spirit of a man is here who passed recently.” Singing with Soweto Gospel Choir and some children from Colin Mann Primary School – winners of Woolies’s MySchool SingWithUs competition – Pharrell fiercely belted out Freedom.

Pharrell’s private performance in Johannesburg – and two other public shows in Cape Town hosted by Big Concert – was as a result of a creative  partnership with Woolworths. At the start of the year, the retail chain announced its collaboration with the star on the “AreYouWithUs?” campaign, which it says aims to uplift education and environmental sustainability in South Africa.

The collaboration, however, has not been free from backlash. On Monday, hundreds of Boycott, Divestment and Sanctions (BDS) Campaign protesters  picketed outside Grand West Casino in Cape Town, where the Pharrell show was taking place.

Highlighting BDS’s long-standing campaign (titled #BoycottWoolworths) to get Woolworths to end its trade with Israeli companies, the movement’s campaigner Muhammed Desai told News24 ahead of the show: “The boycott is not a malicious boycott or punitive. It’s simply aimed at how we can get Israel to end its occupation according to international law.” While adding that “over 17 EU union countries have issued warnings against companies doing business in Palestine occupied territories …. ”

According to the movement’s website, “Amongst other items, Woolworths imports pretzels, figs, pomegranates, couscous, matzos, coriander, figs, litchis, plums, mangoes and other fresh produce from Israel. Israeli agricultural companies are the main beneficiaries and directly complicit in the Israeli  occupation of Palestinian lands and theft of natural resources.”

This week trade union Cosatu released a statement saying that it was backing the BDS campaign led by International Social Justice Activists in Cape Town on Monday. “Today, we cannot put wool in our eyes with injustice meted against the people of Palestine. Cosatu reiterates its solidarity with the people of Palestine, who continue to suffer from political repression and apartheid from Israel.”

In a video article on enca.com on Thursday, titled “Relationship with Pharrell apolitical, says Woolies”, Woolworths’s chief executive Ian Moir expresses: “At the end of the day, Pharrell is here to work with us to improve education, to make the environment cool again and that’s what we’re concentrating on.”