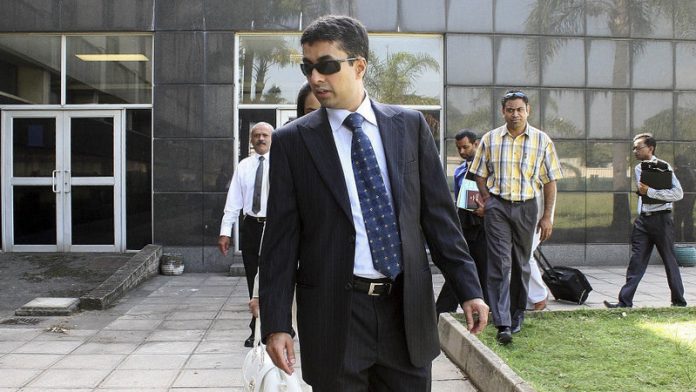 A batch of highly sensitive documents obtained by amaBhungane, combined with other information, could explain why a flashy Durban businessperson named Thoshan Panday appears untouchable.

The documents suggest that attempts to investigate Panday prompted the departure of Hawks boss Anwa Dramat and the national director of public prosecutions (NDPP), Mxolisi Nxasana, as well as the suspension of Robert McBride, the head of the Independent Police Investigative Directorate (IPID), and Johan Booysen, the embattled commander of the Hawks in KwaZulu-Natal.

The evidence shows that police recordings of Panday’s conversations are at the centre of battles within and between the Hawks, the IPID and the police.

One crucial document supports claims by police sources that there is extreme sensitivity over Panday’s intercepted conversations with, and about, the Zuma family, including the president himself.

The saga began in August 2010 when Panday’s home, office and the Durban police headquarters were raided as part of a Hawks investigation of an alleged scheme to defraud the South African Police Service (SAPS) by inflating charges for police accommodation during the 2010 Fifa World Cup.

He was arrested in 2011 after a sting operation implicated him and an alleged co-conspirator, the SAPS procurement manager, Colonel Navin Madhoe, in efforts to bribe Booysen, allegedly in a bid to make the fraud investigation go away. 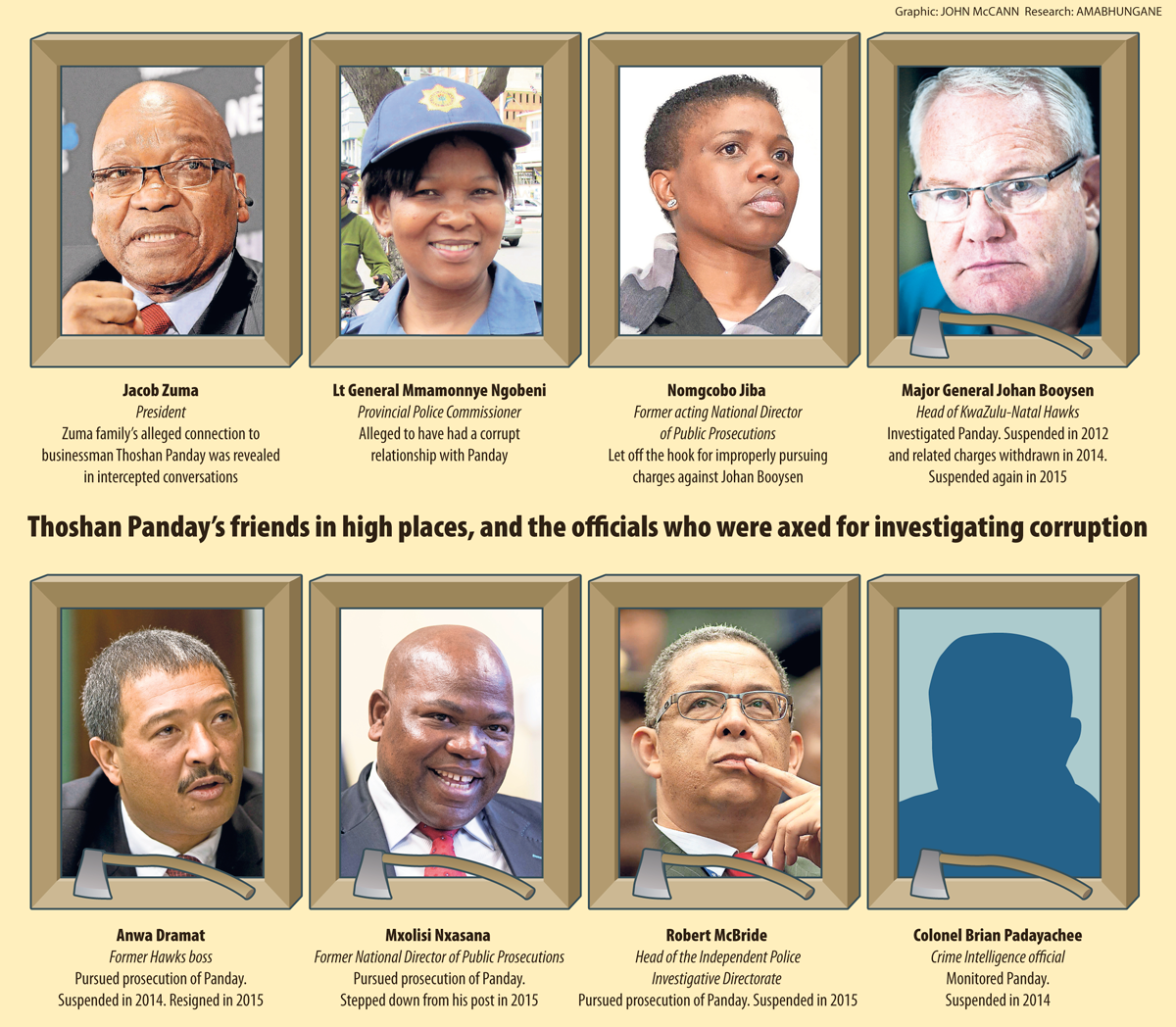 Speculation
In February 2013, bribery charges were mysteriously withdrawn after Panday complained to the National Prosecuting Authority (NPA) and the inspector general of intelligence about the alleged illegal interception of his communications. Advocate Moipone Noko, a protégé of the then acting NDPP, Nomgcobo Jiba, took the decision.

Since then, there has been speculation that their content, rather than their legality, was the real reason for the dropping of charges.

family and, specifically, that he claimed to have paid towards “houses at Nkandla” and had contributed “one bar or two bar”– one or two million rands – to the Jacob Zuma Foundation.

The official also claimed that the president himself had been in direct contact with Panday.

AmaBhungane’s source described Panday as a braggart, and emphasised that because he claimed something did not make it true. But the allegations may partly explain the sustained way in which Panday appears to have been protected.

He maintains the recordings were either illegally obtained or do not exist, but he does not deny the claims.

‘Private’ relationships
Last week he laughed when the “one bar or two bar” quote was read out to him and later told amaBhungane by email: “I am a businessman and I take my social responsibility seriously. My company gives donations to various charities and organisations. Insofar as the nature of my relationship with my friends is concerned, this is private.”

Zuma’s spokesperson, Bongani Majola, did not respond to questions. His legal adviser, Michael Hulley, said in a text message: “In truth don’t think a comment warranted, certainly not from any professional position I occupy.”

The foundation referred questions to its chairperson, Dudu Myeni, who did not respond either.

Also this week, amaBhungane obtained copies of explosive and increasingly desperate reports written by the man responsible for the interceptions to his superiors, providing circumstantial backing for some of the claims.

“The contents of which will be revealed DIRECTLY AND PERSONALLY TO THE NATIONAL COMMISSIONER ONLY as it is not related to the current investigation and it is highly sensitive and controversial.”

The memo was copied to the national police commissioner, Riah Phiyega, and Dramat, who was then the Hawks commander.

‘Corrupt relationship’
It also detailed claims that the intercepts and related investigations implicated a number of senior KwaZulu-Natal police officers as “having a corrupt relationship with Mr Panday”. They included the provincial commissioner, Lieutenant General Mmamonnye Ngobeni, and her husband, Major General Lucas Ngobeni.

A case was opened against Ngobeni in 2011 after it emerged that Panday had paid for a surprise birthday party for her husband, but Ngobeni has repeatedly denied wrongdoing and pointed to a decision by the NPA declining to prosecute.

In his memo, Padayachee wrote: “It has to be emphasised that the investigation has been fraught with intimidation, threats and interference from the outset to date.

‘Due to the sensitive nature of the information revealed during the above-mentioned investigation, several attempts have been made to bring the contents thereof to the personal attention of the national commissioner and divisional commissioner: crime intelligence for urgent intervention and guidance.”

Instead of support, Padayachee received a notice of intention to suspend him, based on the same allegations made by Panday in 2013 of his communications being illegally intercepted, and his claims that the recordings were used to try to pressure him to become a witness against the provincial commissioner.

When he still received no response, Padayachee wrote again on October 19 last year, this time attaching an affidavit setting out the allegations against Panday and senior police officers, and explaining the genesis of the interception operations, which went back to the 2010 investigation of Panday’s R60-million police accommodation contract.

Citing his 33 years of “utmost loyalty and diligence”, Padayachee said: “I sought your guidance and assistance with this investigation, but instead departmental action has been initiated against me.”

Although it seemed to Padayachee no one was listening, other evidence obtained by amaBhungane suggests his reports, among others, set off seismic shifts in the criminal justice system.

The first attempt to suspend Booysen was in February 2012, following a December 2011 Sunday Times splash, headlined “ Shoot to kill: Inside a South African police hit squad”.

Action against Booysen
The news report raised serious questions about the legality of many shoot-outs between known gangsters and members of the Cato Manor Serious and Violent Crime Unit, which was one of the Hawks clusters that fell under Booysen.

Although the questions were legitimate, there were also allegations that the scandal was deliberately exposed by police sources to create a pretext for action against Booysen.

Now Padayachee adds to that suspicion.

His affidavit stated: “The intercepts further revealed exactly how Mr Panday was assisted by several police officials in obtaining and accumulating crime scene photographs to conspire against Maj-Gen Booysen. These very photographs were subsequently leaked to the media and published in the Sunday Times, which eventually led to the criminal charges and suspension of Maj-Gen Booysen.”

In August 2012, Booysen and more than a dozen members of the Cato Manor unit were arrested. Booysen could not be linked directly to any of the killings, but he was charged under the Prevention of Organised Crime Act for being part of a “criminal enterprise” .

By law, such charges have to be approved personally by the national prosecutions boss, who at the time was Jiba.

Lying under oath
Booysen challenged her decision, with the result that the charges were thrown out in February last year and Jiba was in effect accused of lying under oath about the evidence purportedly informing her decision.

Booysen was suspended again, while the police pursued a disciplinary case against him based on the same Cato Manor allegations, with advocate Nazeer Cassim as the presiding officer.

Booysen used the case to make a series of dramatic allegations about Ngobeni’s relationship with Panday. He called the investigating officer in the original 2010 case, Colonel Vassen Soobramoney, to the stand.

In September last year Cassim delivered a devastating judgment. He said: “Soobramoney’s evidence was clear. The provincial commissioner of police in KwaZulu-Natal, Lieutenant General Ngobeni, as well as Madhoe and Panday, were involved in corrupt practices resulting in large sums of money of the SAPS being unaccounted for; on his testimony it was clear to me that Ngobeni caused him to be, literally speaking, orchestrated out of KwaZulu-Natal.”

Ngobeni was criticised for not coming to answer the allegations, though the hearing was postponed to allow for this.

Full record
Phiyega, who did give evidence, was roundly criticised by Cassim and has applied for a high court review of his finding.

But she has not yet delivered the full record of the proceedings, and meaning the process is stalled.

The outcome prompted a complaint in October last year by Democratic Alliance MP Dianne Kohler-Barnard to McBride at the IPID about the alleged corruption involving Ngobeni and Panday.

And Padayachee’s missives to Dramat appear to have hit home. In about November, Dramat formally asked the new NDPP, Nxasana, to review Noko’s decisions to abandon the Panday prosecution.

McBride did the same. He also homed in on the Panday tapes.

On November 19 last year, McBride wrote to the new head of crime intelligence, Bongiwe Zulu, asking for the IPID to be given access to Padayachee and “all related information and evidence” relevant to the Panday cases.

She stalled, referring him to Phiyega. By the time McBride wrote again, this time to the national commissioner, Padayachee had been suspended and his access to the intercepts terminated.

Suspensions
By the end of December last year, Dramat had been suspended, allegedly after calling for the investigation dockets into the scandal surrounding Zuma’s Nkandla security upgrade to be transferred to the Hawks.

The reason given for Dramat’s suspension was that he was implicated in the illegal rendition of Zimbabweans in November 2010, but he was later allowed to leave with full benefits.

In January this year, McBride wrote to Police Minister Nathi Nhleko, calling on him to intervene to suspend Ngobeni over the Panday allegations.

In February McBride wrote to Phiyega about the IPID’s recommendation that Ngobeni and other senior policemen be suspended and charged departmentally.

He noted: “IPID [is] also submitting criminal recommendation to the office of the NDPP to review decisions previously taken on these matters and recommending that the members involved be criminally charged.”

By March, McBride was suspended, embroiled in allegations that he had acted to cover up for Dramat in the IPID investigation of the rendition claims.

In April, Nxasana wrote to Pan­day’s lawyers to say he was reviewing the decision not to prosecute in the bribery case and calling on them to make representations.

By May, Nxasana was gone. – Additional reporting by Sally Evans

AfriForum to prosecute Nomgcobo Jiba for fraud and perjury