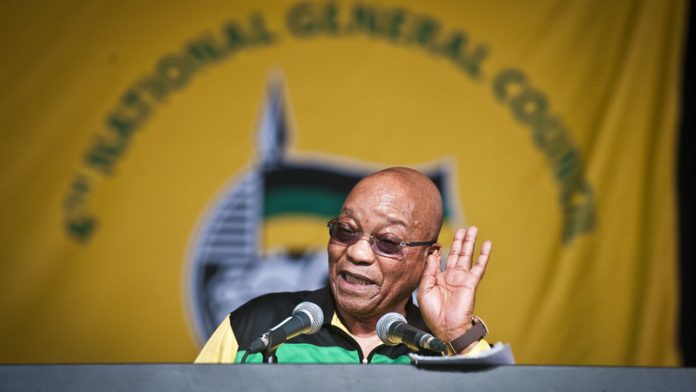 The ANC has lost almost a quarter of its membership and party president Jacob Zuma blames gatekeeping for that. Zuma revealed during his political report to the ANC’s national general council in Midrand on Friday that the party’s membership now stands at 769 000.

This comes a mere three years after the ANC celebrated reaching over a million members at its centenary celebrations in 2012.

The ANC president spoke out for the first time against the so-called “kingmakers” seen to be influencing leadership choices across the party.

“We also need to address the purported existence of the so-called kingmakers in the ANC. There is no structure or league of the ANC that has been accorded a status of being a kingmaker.”

Though he did not name anyone, a group of provincial chairpersons and premiers of Free State, Mpumalanga and North West – known as the Premier League – have been purported to be driving a campaign to elect their preferred candidates come 2017.

While Zuma spoke out against this, he himself was elected through purported kingmakers in 2007 and again in 2012.

The  ANC’s alliance partner SACP has raised concerns about the emergence of the Premier League, accusing the group of seeking to take control of the ANC. This resulted in a war of words between the ANC Youth League and the Young Communist League, with each of them defending their mother body. The Premier League is believed to have influenced the outcome of the ANC Women’s and Youth League elective conferences and the two leagues have made it clear they prefer a woman president to succeed Zuma. Until recently Deputy President Cyril Ramaphosa was expected to be an automatic successor in line with ANC tradition.

During his address, Zuma painted a picture of branch leaders who turn members away because they want numbers capped at 100 so they can control the branch.

“A new form of gatekeeping has also crept in through which ANC branches are blocked from growing bigger than the mandatory 100 members per branch,” Zuma said.

In delivering his political report, Zuma said recruitment of members were on the decrease as a result of gatekeeping. “There is no further recruitment. Why? Because there is gatekeeping,” he said.

He also attributed the decline of membership to members defecting to other parties when their favoured politician leaves the party. The ANC lost scores of members to Economic Freedom Fighters, when its former youth leader Julius Malema formed the party.

He drew reference to an emerging tendency in the ANC where members “belong” to certain leaders in the organisation.

“Another phenomenon that has been identified as a problem is that of members who belong to other members. Their reactions are determined by the people they look up to or who own them.”

In his hour and a half long speech, Zuma slammed factions in the party, something both him and other senior ANC leaders have discouraged before. He attributed factional battles to the battle for power and resources.

“Some of these factions are not based on ideological differences. They exist because of greed and the hunger for power, which once obtained, is abused to take control of state resources and to further business interests.

“In this regard tendencies such as the use of money in order to manipulate the outcomes of electoral process in the organisation are totally unacceptable.”

Where the ANC was coming across disagreements, the party should make efforts to resolve such, Zuma said.

“The internal divisions in the organisation have exploded into the public arena because they haven’t been dealt with for some time,” he said. “whenever there is a problem of whatever kind tackle it immediately. Dont leave them to fester.”

Zuma also told delegates that while they celebrate last year’s general election victory, “we also acknowledge our majority has not been growing”.

The ANC received just over 62% of the national vote, down from 65% in 2009. The party’s support also decreased in several provcinces where the ANC did poorly in particularly metropolitan municipalities.

Zuma said this was because traditional ANC voters were disgruntled.

“Some are dissatisfied, some have decided to abstain during elections while they remain loyal to the organization. We must not take their loyalty for granted thinking that it would be there forever.”

“Some people think the ANC has become self-serving. If the ANC does so, where should they go because there is no any other organisation they can go to.”

The ANC NGC is scheduled to end on Sunday.