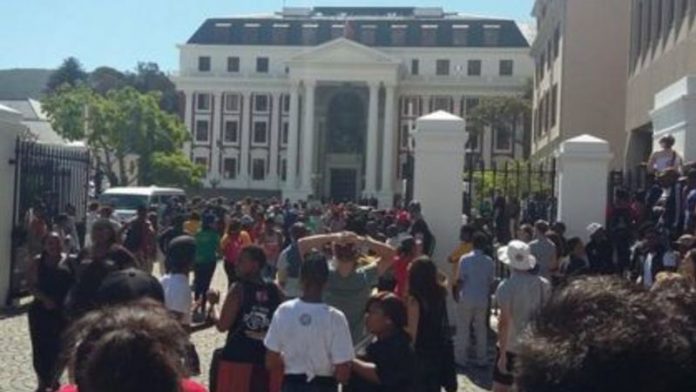 Thousands of protesting students from the University of Cape Town (UCT) and the Cape Peninsula University of Technology (CPUT) descended on Parliament in Cape Town on Wednesday afternoon ahead of Finance Minister Nhlanhla Nene’s medium-term budget policy statement.

The students pushed their way though Parliament’s gates and the police fired stun grenades as the protesters forced their way into the parliamentary precinct.

Riot police were blocking the entrance to the National Assembly.

Build-up
Earlier, the students burned tyres outside the building, as public order police officials dressed in riot gear looked on from behind a police line.

ANC MP Loyiso Mpumlwana was seen chatting with student leaders outside Parliament, who along with their peers were heard shouting “Down with 6%, down with fees, down”.

The chants were in reference to the deal struck by Higher Education Minister Blade Nzimande and university vice chancellors on Tuesday after a marathon meeting in Cape Town, where they agreed fee increases for 2016 would be capped at 6%.

Students called for unity outside Parliament, with many climbing on the statue of Louis Botha at the end of Roeland Street. Plein and Roeland streets were closed to traffic as legislators entered Parliament for Nene’s speech.

Sibusiso Twala, student representative council president at CPUT, addressed the students outside Parliament. Students wanted the respective varsity management teams to address them, along with Nene.

Students sitting on the Louis Botha statue had wrapped police tape around their heads as bandanas while holding a poster stating “Fokof, fokof, fokof to fees”.

Thereafter, EFF chief whip Floyd Shivambu addressed the media, saying the party supported the call for university education to be free and would would ask Nene about it during Wednesday’s sitting.

But students did not take kindly to Shivambu only speaking to media. They chased him away shortly afterwards, shouting “EFF must leave” and “We want Blade”.

Ten thousand CPUT and University of Western Cape (UWC) students were believed to have gathered at CPUT’s Belville campus, north of Cape Town. And at Stellenbosch University, students gathered in the Rooiplein to hear each other’s experiences.

A speaker from the Democratic Alliance Students Organisation said: “[The] 6% increase is not low enough. The money must come from the state. Where is Blade Nzimande?”

A legacy student, whose mother was one of the first coloured students at Stellenbosch University, told the crowd: “This is everybody’s problem. I am reliant on NSFAS [National Student Financial Aid Scheme]. At graduation, I won’t get a degree. I will get an invoice that says ‘You owe me’.”

Medical students from the university’s Tygerberg campus later joined the gathering, with one student telling those assembled: “I am paying R45 000. Next year I must pay R73 000. From where?”

Another student said: “This is the bastion of apartheid. The Broederbond must fall.”

Countrywide protests
The protests flared up after students at the University of the Witwatersrand last week protested against a 10.5% fee increase for the 2016 academic year.

The University of the Free State closed all three of its campuses on Wednesday, with varsity management and the student representative council meeting on Tuesday to discuss next year’s fees.

At NMMU, police fired rubber bullets at protesting students who were throwing stones at the institution on Wednesday, according to police spokesperson Brigadier Marinda Mills.

She said no one was arrested or injured. – News24.com