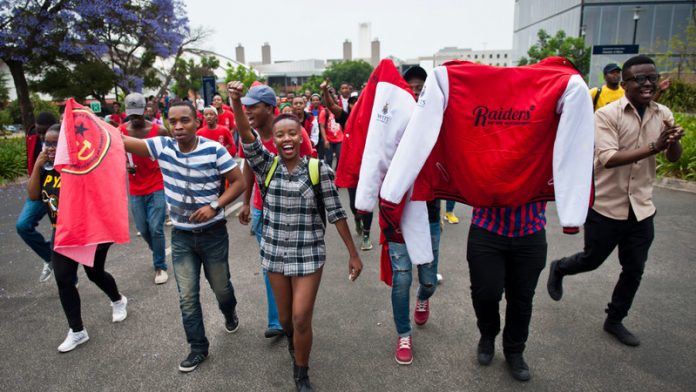 There is still no end in sight to the rolling students’ protest at Wits University. Instead, the action has forced a shutdown of the institution’s campuses for the rest of the week.

“In order to ensure the safety and security of our staff and students, the executive management has decided to suspend all university activities for the remainder of this week. This applies to all staff (academic, professional, support and administrative) and students,” Patel said.

“The university encourages students to use this time productively to prepare for their examinations.”

Wits has been closed since last week Wednesday when the protest broke out. Patel said management had all along been suspending university “activities on a day-by-day basis as developments unfolded around the ongoing student protest”.

Students are enraged by the decision of council, the institution’s highest governing structure, to hike fees by 10.5% next year and the upfront registration fee to just under R10 000.

The institution’s protesting students are demanding no-fee increases for next year, saying they are already paying exorbitant fees. The increases will exclude many poor students next year, they argue.

They seem to have inspired a new wave of unrest across the country’s universities. The University of Cape Town and Rhodes University enter a third day of rolling protests on Wednesday, also over fee increments.

In what is termed #NationalShutDown, students at 15 universities across the country are embarking on protest action on Wednesday against spiraling fees.

Wits students took their protest to the university’s medical campus on Tuesday. They picketed and sang at a road outside the campus, forcing a diversion of traffic.

Afterwards, the crowd marched to the university’s administrative campus in Braamfontein. Police, including both the South African Police Service and Johannesburg Metro Police Department, kept a watchful eye.

Student leader Vuyani Pambo of the Economic Freedom Fighters Student Command told the Mail & Guardian the protest was continuing because Wits management and council have still not indicated they would meet students in the Senate House concourse.

“We’re waiting for management. We don’t know what they are saying, they haven’t communicated to us. We’re still standing on the position that we want 0% [fee increases],” Pambo said.

“We don’t know how he confuses 6% with 0%. We want 0%,” Pambo said, referring to Nzimande’s recommendation to vice-chancellors at a meeting with them in Cape Town on Wednesday.

In a statement following this meeting, Nzimande said: “The stakeholders agreed to encourage their respective constituencies to engage in institutional negotiations at universities with a view to achieve a fee increase of no higher than a CPI-related increase of 6% for 2016.

“The department will partner institutions to enable this process by providing financial support in this regard.”

Co-ordinators of #NationalShutDown said in a statement that students across the country’s universities were hit hard by “exorbitant” fees, hence the drive to spread protests to various campuses.

“The pain of financial exclusions transcends the borders of our institutions and has had a chokehold on all of us while we suffered in silent acquiescence,” said the statement.

“On this historic day of 21 October 2015, in a moment of unbridled ambition, we collectively act in defiance against escalating tuition fees, state inaction and the mental trauma that students experience due to financial exclusion.”

The group is arguing that university education is not a privilege but a right, “and should never be a commodity”.

“We, the students of 2015, stand in solidarity with one another to proclaim that we will not be complicit in an endorsement of the capitalist agenda of commodification of education and any oppressions which seek to denigrate our being.

Management of Wits has maintained it had no choice but to implement student fee increments because state funding to universities was declining.

Wits chief financial officer Linda Jarvis said: “The subsidy increase from government is expected to come in at around 5% and the net effect is that we have to make up our income to cover our expenditure in order to remain sustainable.

“If we do not do so, we put the quality of our academic project at risk. These increases are unfortunately unavoidable but we are doing all that we can, especially at the national level, to look at long-term solutions to resolve the issue of student funding.”