Use your privilege to destroy privilege 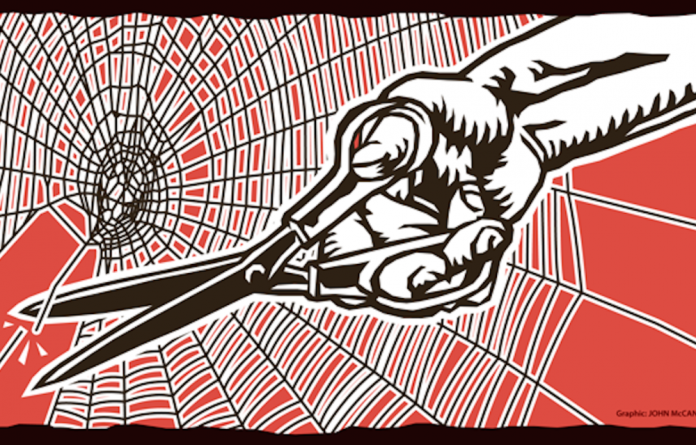 During the first nine days of the #FeesMustFall protests, white students were recognised – glamourised, even – for forming a melanin-deficient human shield at the front of picket lines in an effort to deter police from physically striking black protesters.

Do they deserve praise for their actions? Absolutely, as do all of the protesters and ancillary support structures.

Are these white youngsters the central heroes of the movement because of this singular action? No, not at all.

Were they using a nasty reality of the current status quo to the advantage of a movement of which they were a part, to great effect? Certainly.

My wife and I are two heterosexual, church-going, cat-owning, craft-beer-drinking white South Africans. To paraphrase American comedian Louis CK, there is no year in the recent past or near future to which we could time travel, and not easily find ourselves a support network, business opportunities, or a flat to rent.

Life is good for us. It is easy. And we’re only 26 years old. We work hard – harder than many people we know – but our material possessions outstrip our effort many times over. This is thanks to inherited wealth.

We also find it much easier than many people to make money not only because of the extra capital at our disposal, but because we already speak the languages of business (English and Afrikaans), and leverage the business networks of the private schools we attended.

This is called privilege – it is a social contract. Because we understand that much of our inherited and future wealth was and will be derived from, among other things, artificially cheap labour thanks to the subjugation of black people, we can say that we enjoy white privilege.

We know this, and we don’t think it’s fair. South Africa is our home and we feel that our state of being is at odds with the founding principles of our home, which seek to establish an egalitarian society. And that is why we’re trying undermine this state of affairs by using our strongest tool: privilege.

It’s a fairly controversial view in our peer group, but we think it’s true. We don’t feel guilty for being born white, or even for using the opportunities afforded to us to the fullest extent.

But we would feel guilty if we weren’t actively trying to address the imbalance of our world. I suspect that many of the white students in that human shield may harbour similar sentiments.

So, if you’re pale and feel the same way, here’s a practical list of guidelines (beyond forming a human shield) for white people who recognise that white privilege exists, but are uncertain as to how to play a role in its dismantling.

Understand what transformation is and means

And that is why we have the Freedom Charter. Read it; digest it. Ask yourself if you’re on board with it – education, freedom of movement, decent housing, you know, those essential rights? If you aren’t, you need not read further.

Next up, shut up

The whitest (and possibly wisest) man alive once said, “Stop, collaborate and listen.”

He then went to say, “Ice is back with my brand new invention,” but we’ll ignore context for the sake of argument here.

If we agree that one of the central tenets of white privilege is the ability to have your voice recognised and heard on any occasion, and the natural outworking of this is that white people generally have a lot to say about a lot of things that they may or may never have experienced (I’m looking at you, talk radio), then perhaps we can agree that less talking by white people would be helpful.

Let’s be completely clear: in the dismantling of white privilege, you are not the leader. You are not championing this fight. You are a welcome participant, but you are not a figurehead. That would, after all, be what you’re used to. Which brings us to our next tip:

Look for a mandate and mission

If you aren’t engaging someone who isn’t white at this point, you need to check your methods.

As aware and empathetic as you might be, black people know the pain points that need to be broken through first, because they’re the ones in pain.

Once you have a mandate and mission, move on to the next step:

Sure, it’ll be a nice exercise for you to actually appreciate how much material wealth you have, compared to the average earth-dweller, but there’s more pragmatism than emotion in this.

Taking stock of what you have allows you to compile an inventory of tools your leaders might find useful, like money. Or, if you’re a student, a car.

Another reminder: you are not the hero – you are a potentially resource-rich tool for the betterment of the world.

You didn’t ask for your forefathers to construct a web of power that benefits you and people like you exclusively, but you’re in it now, so use it. And when you reach out to your network with requests in line with your mandate, do it with energy. Be bold – you are white and if you craft your message with care, it’s likely to be read and considered.

And be increasingly bold in your requests to your network to achieve the same or greater results.

If you are effective, you’ll experience the law of diminishing returns as you, and others enrolled in the same network, undermine your privilege.

In conclusion, know what you’re aiming for. Shut up and listen. Find a mandate. Stand up, execute on it. Speak up and rally support and resources to the cause.

And if all of that was convoluted, or too confusing, think of it in exactly the same logistical terms as organising a cocktail party. Except this time you’re the staff.