Lesbos founders in the human tide 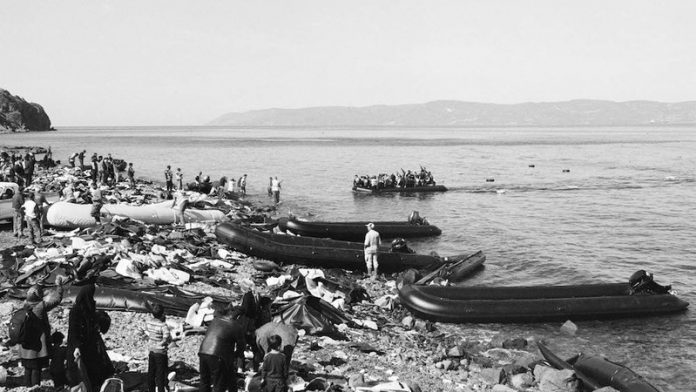 In mid-October, I arrive in Skala Sikamineas on the north coast of the Greek island of Lesbos. I am here as part of a long-term project for the United Nations High Commissioner for Refugees (UNHCR), documenting the refugee crisis in Europe and the Middle East.

For more than a decade, I have documented the effects of conflict and humanitarian disaster around the world, and much of that work has been in the countries from which these people now flee.

I understand the fear that is driving people to leave their homes. I thought I had seen it all, but I have never been so overwhelmed as by the human drama unfolding on the beaches of Lesbos. In its sheer scale, it is hard to comprehend; the lack of response impossible to explain or excuse.

A young Afghan boy is looked after by his aunt while his mother, who collapsed when the boat landed, receives emergency medical treatment. A fifth of those who arrive in Lesbos are from Afghanistan. (Giles Duley/UNHCR)

The events of the past few years are unprecedented in size and scope. Not since World War II have so many people been on the move. The UNHCR estimates there are more than 60-million forcibly displaced people worldwide, with more than four million Syrians alone leaving their war-torn country to seek safety in neighbouring countries and Europe.

On Lesbos, I have watched thousands land, fleeing wars in Afghanistan, Syria and Iraq. Again and again they say to me: “We thought we would die on that boat, but at least there was some chance. What we left behind was certain death.”

On landing, men break down in tears, women stand lost in visible shock, children cry hysterically. The noise and chaos is deafening; humanity is laid bare on the shores of Europe and the response from politicians is a shambles.

It is volunteers who hold this frontline, often taking unpaid leave from work, bringing their own equipment and living in whatever accommodation they can find: a nurse from Palestine, a doctor from Israel, lifeguards from Barcelona; from Bolton to Oslo, ordinary people are making a difference. When survivors, upon landing, shake your hand and say “thank you”, I am ashamed, for they have nothing to thank us for. If this had been my family seeking safety, I hope the world would treat them better.

Safe harbour: Boat after boat lands on the coast of Lesbos between Eftalou and Skala Sikamineas. (Giles Duley/UNHCR)

We can argue about the root causes and possible solutions; we can discuss the difference between refugees, asylum seekers and migrants; we can blame traffickers and smugglers. But the simple truth is that men, women and children are suffering terribly and dying on the coasts of Europe.

I still work on film, so it’s some time before the first rolls are developed and contact sheets delivered. Working this way gives me the time to consider what I’m doing, especially for a project like this, which is focused on documenting the breadth and depth of this crisis.

In the relative calm of Goji, a harbour-side café, I start looking through the images, seeing with clarity the fear and emotion now frozen on the faces of the refugees. It’s almost too heartbreaking to look at.

As I sit there, the mayor, Giorgos Saroglou, joins me for a coffee. He talks of how the local population is also struggling with the effect of this crisis; he’s trying to hold together a community battered by tragedy. “How can anything be normal when each day you see a drowned child?” he asks, dropping his head. “This coast has become a cemetery of souls.”

It’s nearly 11pm in Lesbos. Today, November 3, has been one of the busiest on record for refugees arriving and, despite the dark, boats are still landing.

Estimates put the figure at more than 7 000. Two men and two children drowned. The camps are full, the volunteers and agencies overwhelmed. Families are sleeping wherever they can. An Afghan father with a baby in his arms asks for somewhere to sleep. He offers to pay three times the price in a hotel, even just for his wife and baby. When it’s explained there is nowhere left and no blankets, he says: “Touch me, am I not human too?”

To make a donation visit http://donate.unhcr.org/international/general/

Merkel and the revenge of the old white boys’ club

For almost two decades, a conservative all-men's pact has waited to have its political revenge on Angela Merkel
Read more
World

On Samos Island, some 2,000 asylum seekers are crammed in a refugee centre designed to accommodate only 700 people.
Read more
Special Reports

The Anatomy of a Rescue

Refugees panicked and drowned as the overloaded boat they were dumped on sank.
Read more
Advertising
Continue to the category
Politics