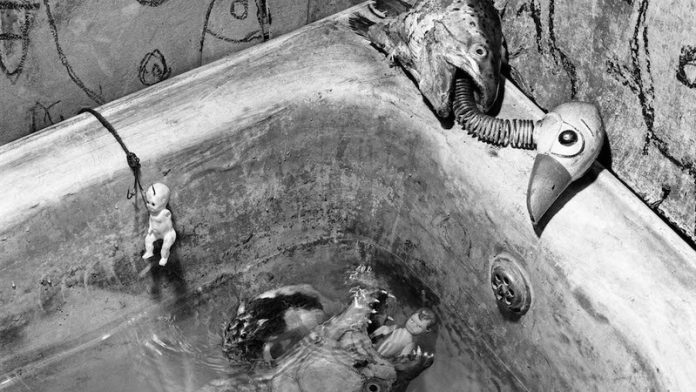 ‘We photograph things in order to drive them out of our minds.” This fantastic quote from Franz Kafka appears in the beginning of Roger Ballen’s new book and perhaps best sums up his work.

As a photographer, Ballen will always be obsessed with the inner workings of his mind – and the outer workings of the minds of others. His furious and deliberate cerebral cartography is given more oxygen in The House Project, an intimate collaboration with Didi Bozzini, who also provided text for Ballen’s previous books, Asylum of the Birds and Roger Ballen’s Theatre of the Absurd.

It was a natural fit for the two to collaborate anew, because Ballen says: “Didi Bozzini has a profound understanding of my photography and the human condition.”

The House Project takes as its starting point the metaphor of the mind as a house. As Ballen says: “The mind is like a house and the house is like the mind. One can move from the basement to the attic by climbing stairs in the house or by a corresponding state whereby one moves from the deeper untouched consciousness to a place that is linked with the ethereal.”

Of the selection process, Ballen says that “after [Bozzini] wrote the text for the four floors of the house I tried to choose images that would coherently link his writing to my photographs. The basement of the house was frequented by apparitions, ground floor by human absurdity, first floor by still lifes in a so-called ‘reading room’, and the attic with references to the heavens; human illusions and delusions.”

Ballen went through his archive, eventually settling on just over 40 previously unseen images for The House Project. These were created over a 15-year period, starting in 1998 when Ballen produced the body of work that would eventually be published as Outland.

The work that appears in “The Cellar” – the first part of The House Project – is perhaps the most complex. Bozzini writes that “the cellar is the most intimate part of the house. When you go down to the cellar you are in the deepest part of your mind … where it all begins and it all ends.”

These photos are void of elements from outside. Ballen has conjured these from the innermost recesses of his psyche. He has created images on glass using paints and epoxies and then photographed them.

They were taken over an eight-year period between 2005 and 2013. Ballen always uses the same approach when working, never planning anything in advance, allowing the process to dictate the result.

As he writes: “I never plan my photographs prior to arriving at the site. It is my goal to arrive with a quiet, silent mind. My photographs come about through the interaction between my conscious and unconscious mind, between me and the subject. Like brush marks in a painting, there might be thousands of steps before I decide to take a photograph. These photographs are very different to anything that I have seen in photography.”

The House Project is uncomfortable viewing. The works shake you violently, forcing you to try to engage further. Ballen’s work polarises opinion. It will continue to do so when the images in The House Project form part of a larger book of 91 photographs focusing on the theme of apparitions that Thames & Hudson will publish in September this year.

Coinciding with publication of The House Project book is an exhibition of photographs from the book, at Gallery MOMO, Johannesburg, until 28 February and at Gallery MOMO, Cape Town, in March.

All images by Roger Ballen.

Extract from ‘The Journey: New Positions in African Photography’ — an introduction