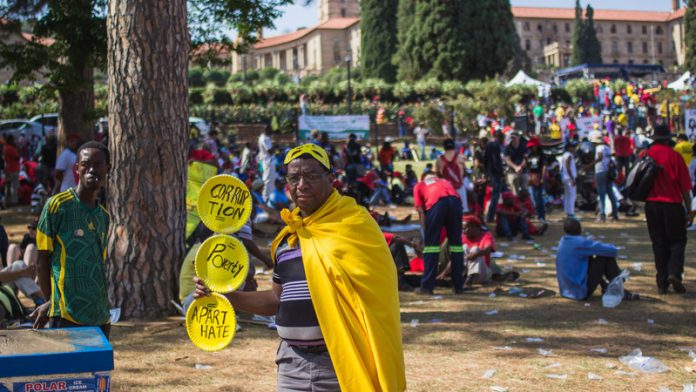 This indicates that perceptions regarding the extent of corruption in the country are stabilising.

The country’s score of 44 on the index, however, remained unchanged from 2014, Corruption Watch said in a statement on Wednesday.

A country’s score referred to the perceived level of public sector corruption on a scale of 0 to 100. Zero meant a country was perceived to be highly corrupt and 100 that it was clean.

“The good news is that for the second year in succession, our score, as measured by the CPI, has remained the same and our ranking has improved slightly,” said Corruption Watch’s executive director David Lewis.

He said the country had to turn the situation around and added that it could not afford to fall any further.

TI’s index was compiled from a composite of surveys conducted during the year by organisations such as the World Bank, the African Development Bank and the Organisation for Economic Co-operation and Development.

Government’s “poor job”
The organisation said the stability in perceived corruption revealed by the CPI was at odds with another TI survey, the African edition of the Global Corruption Barometer (GCB), released in December last year.

The GCB revealed that 83% of South Africans polled believed that corruption was increasing and 79% believed the government was doing a poor job of combating it.

“The difference between the two important surveys is explained by the different character of the respondents,” said Lewis.

“The opinion-makers surveyed for the CPI see evidence that key pockets of government are deeply concerned about corruption,” adding that this was particularly true of important opinion-shapers such as the national treasury.

‘Getting away with it’
However, the “ordinary” South Africans surveyed by the GCB saw prominent political and public and private sector leaders at all levels continuing to loot their towns, provinces and national government on a grand scale and getting away with it.

“Their perceptions are equally valid. The good work of those serious about combatting corruption is overshadowed by those who continue to behave with impunity,” Lewis said.

Corruption Watch believed tit was essential to demonstrate that no one was above the law.

“As long as people with wealth and political power are perceived to be above the law, our public and private sectors, as well as our political institutions, will be seen to be riddled with corruption.” –  News24

Toyota factory in KZN up and running four months after...