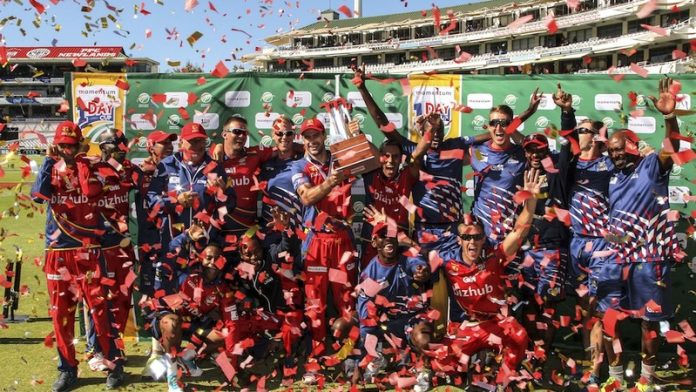 On Thursday morning, in the gloriously low-key surrounds of SuperSport Park, the Highveld Lions stepped into the Titans’ den to defend their Sunfoil Series title. Given the lack of crowd, the lack of fuss and possibly – difficult one this – the lack of meaning permeating the event, many would have missed the greater symbolism of the occasion.

Symbolism there was aplenty. In defending their title, the Lions were playing the top-of-the-league Titans, who have already captured this season’s Ram Slam T20 Challenge. The Lions themselves are holders of the Momentum One-Day Cup and so, barring an irresponsible late lunge for the line by the Knights, they and the Titans will hold all three of this season’s domestic titles between them.

Once was the time when a franchise like, say, the Cobras, would give the Lions and Titans a run for their rand – or more. Now the Cobras – unhappy and underachieving – are cannon fodder for upcountry outfits who are more ambitious and better run. The balance of power has shifted definitively to Gauteng.

And, not only has it moved from the Western Cape, but the tide has also receded from former nurseries such as the Eastern Cape, Border and the Free State. This season’s stellar international achievers – Quinton de Kock, Kagiso Rabada and Temba Bavuma – are all upcountry cricketers.

In this time of peril for South African cricket, with meek capitulation the order of the day in the World T20, it would be reassuring to see a greater spread of talent and therefore greater competition between the six franchises. Just the opposite, in fact, seems to be the case. We are in Barcelona and Real Madrid country, with not even a snarling Atletico to yap at their long-gone heels.

Twenty-four hours after the Lions started their Sunfoil Series defence against the Titans, their rugby namesakes take on the Canterbury Crusaders in the rarefied surrounds of Airline Emirates Park. The Crusaders, fresh from an Easter weekend win over the Sharks in Durban, are a side by which one’s Super Rugby pretensions are frequently judged and, should the Lions win the match, their long-suffering fans will dare to believe that something truly miraculous is in the offing.

Should they lose, however, all is not lost. On the road a month ago, the Lions narrowly pipped the Chiefs in an eight-try frolic that gave Super Rugby the Hollywood treatment.

The new tournament format has rightly come under scrutiny by the scribes this season but, by the same token, here’s a tournament that can serve up a pretty filling 36-32 away win. Purists might have got sniffy about porous defences. By contrast, the punters went home well-fed.

Golden Lions coach Johann Ackermann has not only kept faith with the players he inherited: he has also encouraged his team to play the kind of rugby that stands at an angle to the prevailing local norm. For many, Ellis Park is on the dark side of the moon; those who do brave the shadows, the ubiquitous car jockeys and the dereliction, are invariably brought to the edge of their seat.

There’s always a chance in watching the Lions that you might actually fall off that seat – but it’s always going to be a dizzy ride towards whatever it is you hit first.

Key to the Golden Lions’ sense of fun and adventure has been Elton Jantjies. It’s a measure of his importance to the pride that, when he injured his wrist in the home victory against the Cheetahs two weeks ago, a sense of deflation permeated all of Gauteng. Time was, a few seasons ago, when Jantjies could look like the boy who has lost his mother at the mall when things didn’t quite go according to plan.

Those days are over. Back from Japan, he appears to be a more settled player and a more rounded human being. Crucially, Jantjies is prepared to give things a shot. In a sporting environment that seems largely inimical to risk, the freedom he has been given and the freedom he gives make the Lions the most entertaining of our Super Rugby franchises to watch.

Always running just off Jantjies’s shoulder is Warren Whiteley, the Golden Lions skipper. If Jantjies is formerly the little boy lost, Whiteley is like the crazy kid who falls heavily off the jungle gym and absolutely refuses to be consoled with the potato prints during a quiet hour in the corner. Whiteley is spring-loaded. It gives the Lions the vivid, vibrating energy that they will need more and more of as the mild evenings of autumn give way to the slog of winter proper.

As far as the province’s cricketers are concerned, one of the reasons why the Lions and Titans are so strong is because there’s a good informal relationship between Jacques Faul and Greg Fredericks, the chief executives of the Titans and Lions respectively.

There’s also a regular exchange of players. Last season De Kock and Chris Morris headed north to Centurion, while this season Qaasim Adams travelled south on a temporary loan deal. More permanent will be the move made to the Wanderers by the young wicketkeeper who did much to win the Titans’ Ram Slam final in December, Mangaliso Mosehle.

The move tells us several things. That, one, Fredericks is preparing for life after Thami Tsolekile, implicated in the domestic match-fixing scandal and, two, along with the recruitment of Reeza Hendricks from the Knights, the Lions will continue to have the strongest first-class batting line-up in the country.

It augers well. Now all it needs is for there to be greater synergies for Lions of different codes. Perhaps they could park a single sponsor together?