Education, gangsterism and the Constitution – Cape Town youth have their say

Gangsterism on the Cape Flats and poor quality education came under the spotlight in Parliament on Monday as young South Africans from several Western Cape schools made their voices heard during a learners’ dialogue on constitutional education hosted by the justice and constitutional development department.

Leading the discussion was Justice Minister Michael Masutha, but it was the pupils who said the most, tackling the country’s burning issues such as corruption, education, and gang violence in Manenberg. They gave their opinion on government’s performance in delivering on its constitutional mandate.

“They promised us a safe place but they have not delivered,” said 17-year-old Lihle Madwantsi from Manenberg High School, “I can guarantee you, its not safe… its not safe.”

Madwantsi, who attends Manenberg High School, but resides in Gugulethu, as it is the closest school to his area, was part of the group of some 80 pupils invited to participate in the session which celebrated the twentieth anniversary of the Constitution and provided an opportunity for engagement with the minister and provincial justice head, Advocate Hishaam Mohamed. The department’s panel also included Masutha’s spokesperson Advocate Mthunzi Mhaga.

Posing his question to the panel, Madwantsi asked whether police officers searching Manenberg residents without a warrant were abiding by the Constitution, which, according to the minister, was not a violation thereof.

Madwantsi later expanded on his experience with police in Manenberg – an area which has seen yet another flare up in gang violence – and why he believed the police and government, both national and provincial, had failed the community.

“Police come and put tape around the body [of the deceased],” said Madwantsi.

“Then the forensics take the body away and that’s it, you never hear from them again. If it’s a rich person who died, then there is an investigation that will take place but then, when it is a poor person, they just write down notes, open a case, then they leave,” he said.

Madwantsi said police would ignore witnesses, not questioning anyone on what had happened at the crime scene.

He said government behaved in a similar manner, appearing only to “make empty promises just before the elections”.

“They promise you this and that and then they disappear,” said Madwantsi.

“Then, they come back five years later to see if you still trust them and then they disappear again to the surface of the earth.”

Madwantsi said this was the reason he would not vote in the 2019 elections, the first one for which he would be eligible to cast his ballot.

Another pupil – this time from former model-C school Settlers High – 16-year-old Beatrice Mwamba said she felt South Africa was on the right track.

“We are 22 years young, in regards to our democracy,” she said.

“If you look at a lot of the world and compare it to ours, they’ve had their power with quite successful governments for a number of years. I think South Africa, in a sense, needs to be patient.”

Mwamba said that she was not trying to justify government’s failures, but rather trying to understand that the country’s democratic lifespan was in fact rather short.

“I am going to vote because heroes fought very hard for me to vote so even though there are criticisms, what about those who shed their blood, who gave their lives for us?” he asked.

Nyembezi impressed the minister with his legal knowledge, providing an explanation of title deeds when no other pupil could do so. When Masutha asked if he would be studying Law in the future, Nyembezi said he hoped to do so.

However, when questioned later, it seemed Nyembezi faced obstacles regardless of his evident legal savvy.

“Next year I am in Grade 12 and yet I cannot use a computer,” he said.

“In a few years to come, I will be in university [and] since not all of the assignments are written by hand, I don’t know how I am going to survive”.

Nyembezi said that in this regard, the Constitution had failed him.

“I make use of the Constitution. I am using it in a way that I get free education but it is not of a good quality,” said Nyembezi.

“How is it that 22 years into democracy we still study in containers? There’s no lab for computers, we don’t have textbooks. We get free education but it is not of a good quality that the Constitution claims it should be.”

“Today, I am free to go anywhere, to exercise my rights, free to come to Parliament,” he said.

“I feel that I belong here and when I sing the national anthem, I have pride that this is where I belong and I hold my flag high.” – African News Agency (ANA) 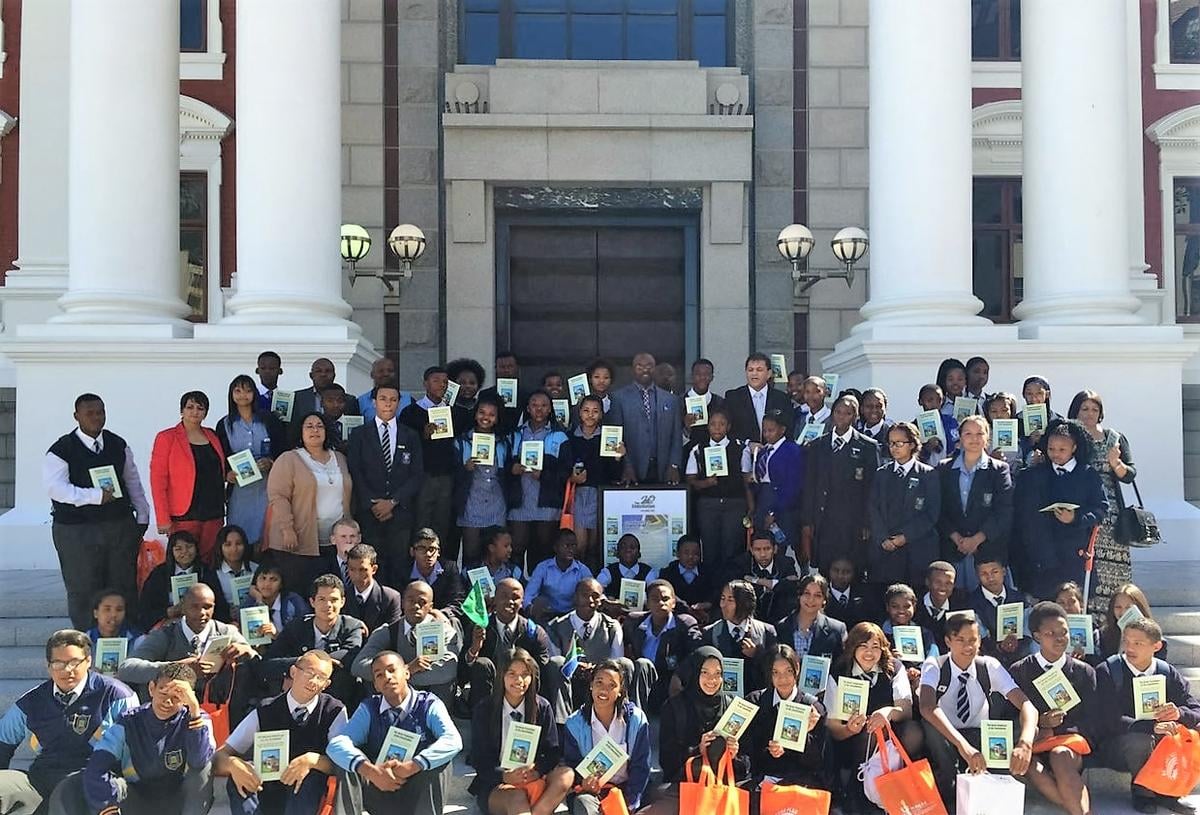 Pupils went on a tour of Parliament with Minister Michael Masutha after they were invited to speak on the Constitution and education in the Western Cape region. (Picture supplied.)