Zuma will go – but it won’t be an easy task 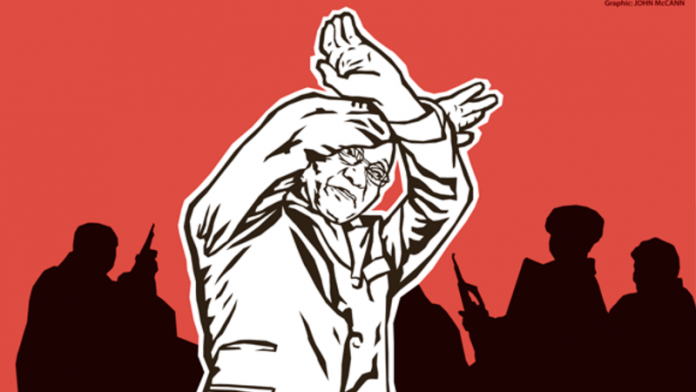 The president of South Africa has to go – and will go. Despite this certainty, a precarious political space hovers: we cannot yet fathom how four sets of uncertainties – the when, how, making space for whom, and what damages the ANC will suffer – are going to gel to give us a ­stepping stone out of the Zuma­geddon morass.

There is a war of position to capture the ANC from President Jacob Zuma and his Zumaist forces. These forces are starting to fray and split. There is new courage at the ANC top to challenge kingpins, open encouragement to report wrong­doings, and the half of rumours of parts of the ANC being bought out by the Gupta dynasty.

New signs of the grass-roots showing dissent and rejection of the Zumaist capture rise daily. Empty stadium seats and silence when the president belts out Inde lendlela esiyihambayo, instead of apologies, tell the story of the ANC now. Yet even though they are increasingly under siege, the Zumaist incumbents still have the upper hand.

Possible alternative futures, or scenarios, are emerging out of the battle between the inevitabilities and the uncertainties. None are pretty. All confirm that, beyond this war, the ANC’s character and leadership will be scarred, ­unable to return to any version of former grandeur.

Three scenarios for the departure of Zuma help to fathom the quagmire. They capture the alternative outcomes for the ANC. Images of siege and war spring to mind.

The scenario names in this analysis are taken from the scorched-earth siege of Leningrad in World War II, the Bosnian War’s three-year siege of Sarajevo, and the shorter siege of Misrata during the Libyan civil war.

Leningrad depicts the scenario of a prolonged siege in which Zuma will remain in power beyond the ANC’s 54th national conference in December 2017 and see through his presidential term until 2019.

Sarajevo denotes the scenario in which the ANC will call it a day for Zuma at the regular 2017 end of his term as ANC president. The “two centres of power” might prevail if the newly elected ANC president does not also assume state power, but gets assigned to propel the ANC into the 2019 election campaign.

Misrata will see the ANC cutting its losses and booting out its president come the results of the August 3 local government elections. This option appears less likely, largely because the ANC would not have another election looming at that point, and it would wish to go big on the process and propaganda of changing its leadership. The party, after all, would need to create expectations that leadership change will mean real change.

The scenarios are variations on the theme of how to dislodge a president who has no intention to call it quits, a leader entrenched in the “fortress Zuma” that is still the current-day ANC (a faction that remains dominant even if increasingly embattled).

The ANC members who are not in this camp are winning ground, but without assurance of ultimate victory. The questions are: How fast would the transition away from Zuma unfold, which institution or ANC structure would be the main trigger into the post-Zuma era, and what actions would be most likely to affect the short- to medium-term future of the ANC? Popular credibility, electoral fates and the potential for recovery when Zuma has gone make up this mix.

At the moment Sarajevo seems to be the most likely of the scenarios, requiring South Africa to bear with its president until the end of 2017.

But, if presidential scandals and exposés continue to pile up, the balance could tip in favour of Misrata. For this option to be realised the ANC needs to calculate that it cannot possibly face local elections with Zuma as its poster man.

Other possible but currently doubtful scenarios include a nonsiege-like immediate Damascus Road experience in which the party’s national executive committee (NEC) does a rapid recall, or Zuma does the unthinkable – a kamikaze resignation to remove himself from ANC and national office before local elections.

A batch of inevitabilities help give reality checks as the country braces itself for the process of cutting (“limiting”, at best, given that man’s pervasive hold) the notorious Zuma presence. The certainties that drive the scenarios include the following.

The president will not go voluntarily and the only body that can push him out is the NEC. But it does not yet have the brawn to show him the door. Thus either an ANC support-base-led revolt or electoral punishment of the organisation and its incumbents will be required for the Zumaist leaders to get to the point of forcing the president out. To be sure, the revolt signals, short of a punishing local election outcome, are accumulating: for example, ANC “big chiefs” are being embarrassed publicly and religious leaders are ­speaking out.

Other core certainties include that there is no way forward for the ANC without shedding the president. It will happen, but the question is how long and how much damage can be endured up to that point. Shedding would be either through a Mbeki-style, NEC-driven “killing off” of the president, or the NEC calling a special national elective conference, as in the Sarajevo scenario.

Questions about succession jump from each of the scenarios. The uncertainties tripping the ANC include: whether the ANC can survive electorally with Zuma as president; and whether the ANC should appoint an acting ANC and national president, or go for an early elective conference to formalise a new leadership.

Acting out the Leningrad option, the Zumaists may assume they can maintain their man in power, business as usual, until all terms end as scheduled. This is while some in the ANC are reported, through their Operation Exit Zuma, to be planning to shelve the man after the completion of the local elections.

Cutting across the three scenarios is the certainty that the ANC does not have a successor line-up that assures it of a glorious post-siege future. The leading contenders are there, but opposition political parties are ready to feast on all of them.

Nkosazana Dlamini-Zuma and deputy president Cyril Ramaphosa are baggage-ridden, entrapped in grids of Zuma connections and big business as well as worker-killer connotations.

Almost worse, the ANC might not even have to choose between the two: internal voices suggest there is a prearranged deal for Ramaphosa to get the acting presidency when Zuma goes before his term runs out, and that Ramaphosa will then hand the reins to Dlamini-Zuma come election 2019.

Deputy presidency aspirants (and next-round prime candidates for the presidency) include Gwede Mantashe, Zweli Mkhize and Baleka Mbete. To date, it is only Mantashe who has exited occasionally from the Zuma orbit.

Mbete’s entrance, courtesy of her clan’s anointment, is probably the most tactically calculated of them all. Imagine: she positions herself as a woman presidential candidate, implicitly threatening to divide the women’s lobby and opening the door for Ramaphosa to slip into the presidency, the slot the lobby has booked for Dlamini-Zuma. To keep Mbete out of that race, she gets offered the deputy presidency candidate on the ANC elective conference slate …

A Zuma Must Go pack of opposition political parties, civil society and political elites (including a growing range of former internal and external struggle leaders) exerts substantial pressure on the ANC’s attempted holding operation. Civil society campaigns will not topple the president, but they deliver powerful evidence of how deep the president’s deficit of popular respect and credibility is.

Popular influence is at the heart of both the Sarajevo and Leningrad futures. As church leaders and constitutional stalwarts speak out, the edifice of ANC credibility suffers, and the public mood alters.

Come election time these changes may find concrete expression in ballot-marking. It is a cross-scenario certainty that outspokenness about the emperor’s missing ethics is not just an opposition party missive. The ANC nowadays is as much in a mode of internal leader-correction as it is the product of people-correction.

Susan Booysen is author of Dominance and Decline: The ANC in the Time of Zuma, and a professor at the University of the Witwatersrand’s School of Governance.

Eskom: South Africa can learn from Australia’s mistakes before it too burns

The current restructuring plan for the state-owned entity won’t solve its problems, but there is a way to make the power utility work successfully
Read more
Opinion