Moseneke and the duty of justice 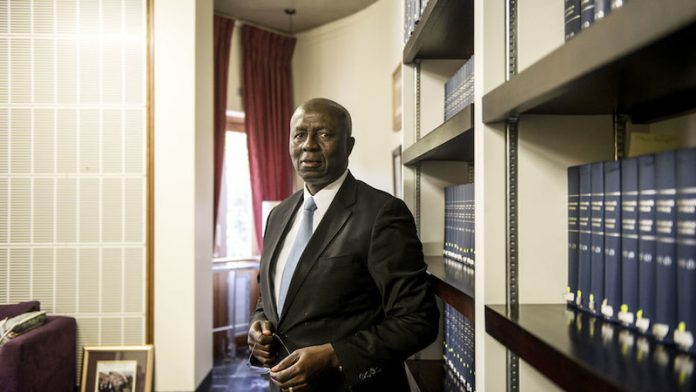 Purple. It’s on the couch, the chairs, even the walls. Only the desk has been spared the imperial treatment. The greyed man who inhabits this space refuses to pose for pictures behind this desk, insisting earnestly that when he occupies “that” chair, he assumes his mantle as deputy chief justice of South Africa.

“That is where I work and serve the country and its people. I respect that chair and the responsibilities that come with it,” says Dikgang Moseneke.

When evening falls on Friday, he will no longer occupy “that” chair. Prominent South Africans will gather at the Constitutional Court to bid farewell to Moseneke as he retires from the Bench after 11 years on the hill.

For Moseneke, it will be a retirement from a life dedicated to serving South Africa’s democracy in a variety of ways. At the age of 15, he was arrested as a member of the banned Pan Africanist Congress and spent the next 10 years on Robben Island as the youngest political prisoner on the infamous rock.

He used the prison time to obtain his law qualifications and, after his release, practised in his native Pretoria while still being part of the PAC’s underground movement. Come the 1990s, Moseneke helped give birth to the new South Africa as the deputy chairperson of the Independent Electoral Commission during the 1994 national elections.

Moseneke speaks sincerely about what it means to him to occupy the second-most powerful seat in the South African judiciary, saying that all cases he has presided over have been of equal importance to him.

People often view “big cases” as those that have an effect on broader society, but the smaller and less political cases are often the most intense.

“I cannot remember a case that was not challenging. The role of the judge is to resolve disputes and, by the time the cases reach the Constitutional Court, that is an indication of how serious the issues being disputed are.”

Although he sees all cases presented to him as important, he says that Abahlali baseMjondolo’s application in 2009 kept him up late at night. At stake were the rights of landless people who had occupied land and were facing summary eviction.

“The difficulty for me, as a judge and as a human being, was the impact of the evictions on their lives – they had no alternative accommodation. More importantly, the landlessness of people is structural. It is not a matter of inconvenience that their homes are broken down.”

Abahlali baseMjondolo won the legal battle, with Moseneke noting at the time that the KwaZulu-Natal Slums Act “considerably undermines the protections against the arbitrary institution of eviction proceedings”. Looking back on the case, he says it reminded him that issues of landlessness are directly linked to our humanity and dignity.

“Land is not just an issue of economic or commercial importance – it has meaning at many levels. It is very spiritual. It is in land that we bury our people, we connect and speak to our ancestors. It is land on which churches, temples and mosques are built and it is from land that we eat and survive.”

Moseneke states unequivically that he does not want to discuss South Africa’s current political climate. He cannot be blamed, considering the backlash he has received during his term, with senior ANC politicians such as Gwede Mantashe, Zweli Mkhize and Blade Nzimande accusing him – and the judiciary in general – of blurring the lines between Bench and state.

The most glaring attack on Moseneke happened in silence when he was overlooked for the top job, despite already occupying the deputy role. For the Jacob Zuma-led government, Moseneke was seen as too much of a Mbeki-ite to be appointed chief justice. His cause was dealt a death knell by widely reported utterances at his 60th birthday dinner in 2008, where he emphasised the judiciary’s independence from the wants and needs of the ANC.

It is a cause he emphasises now in his purple office: the importance of the three arms of the state. “The role of those of us in the judiciary is clear; the same goes for politicians and those in government. One cannot impose their own preferences on the judiciary – the Constitution constrains our agency for the greater good of the people.”

Throughout his tenure, and even with his career-hobbling statements, Moseneke has persisted with his mission of working towards a more equal society.

“We have too many people in our country that are landless. Their landlessness is connected to a past which is peppered with colonialism, racism and apartheid geography. It is the most visible thing you see when you drive in urban settlements.”

It is for these reasons that Moseneke is not at all surprised that young people are raising questions about landlessness. “Young people must ask and confront this issue – this shows that the issue remains unresolved. We must remain a thinking and debating society; we will be better for it.”

In 1993, Moseneke was part of the technical team that drafted the interim Constitution and has worked closely with those who put together the final Constitution, which recently celebrated its 20th anniversary. “Constitutions are never perfect but ours is as good as it gets,” he says proudly. He finds no faults in it and hails it as one of the best in the world. This does not mean there are not gaps, but Moseneke says the gaps are more in implementation than formulation.

“We might want to rethink the way in which certain aspects like public appointments are done, land issues and how we address the increasing problems in higher education.”

At the entrance to the Constitutional Court, the wall is dressed in black-and-white portraits of the judges that have sat on the Bench of the highest court in the land. Most of the portraits are of men, with a few women scattered among them. Moseneke says that, in terms of numbers and demographics, there has been much transformation in the judiciary. “It is much better than it was before but I believe that more women must be appointed. This is necessary.”

With decolonisation on the lips of many South Africans, especially young people, Moseneke believes that this task should be in the hands of activists and not judges. “Decolonisation is the total eradication of colonial legacies; this cannot be done on a judicial level. We merely uphold the Constitution. The work [of decolonising] will happen through the grassroots empowerment of South Africans.”

He walks towards a table filled with portraits of himself and his family. He smiles as he picks up a photograph that was taken when he became the country’s deputy chief justice. “I came into this office a young man and now I leave with grey hair,” he says over his laughter.

Although his departure from the Bench is bittersweet, Moseneke is looking forward to resting and spending time with his family, especially his grandchildren. For him, his retirement is a pivotal period during which he can reflect on his time in office.

“On Friday, I will find out if I have served this country faithfully,” he says. “I can only hope that I have.”

Esidimenis are going on all the time