What on earth were you thinking, Zapiro? 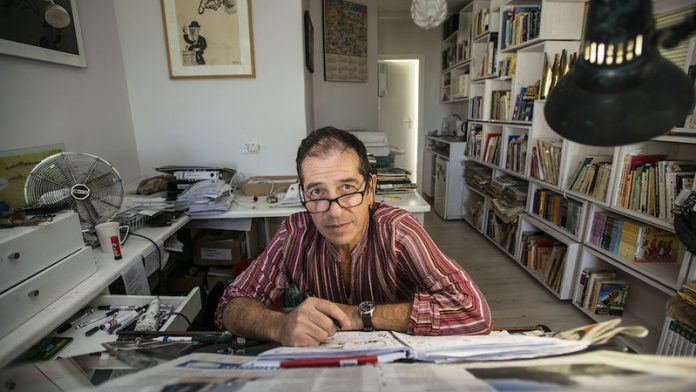 Zapiro is in trouble. South Africa’s best-known cartoonist has been in hot water before, but this time the tone of the criticism seems different. At the heart of the matter is a cartoon drawn by Zapiro this week showing President Jacob Zuma as an organ grinder and National Prosecuting Authority (NPA) head Shaun Abrahams as the monkey dancing to his tune.

The response from many South Africans was simple: What the hell was Zapiro thinking? It’s been mere months since KwaZulu- Natal estate agent Penny Sparrow almost sparked a race war by referring to black South Africans as monkeys. Long before Sparrow came along, the “simianisation” of black Africans was considered the most racist of tropes.

Surely Zapiro must be conscious of the offensiveness of the use of monkeys as a metaphor for black South Africans?

“Of course,” he says now. But he adds that he assumed that his audience would interpret the primary metaphor as being that of the organ grinder and his monkey specifically: the notion of one person (Zuma) being obviously in control of another (Abrahams).

Zapiro’s cartoon was produced in the context of Abrahams’s announcement that the NPA would be appealing against the court ruling that corruption charges must be re-instated against Zuma.

“I thought that what I was doing was pretty clear: a pretty clear metaphor, a pretty clear understanding of the way people are operating within the same scenario,” Zapiro says. “You have these two figures: [Zuma] is not in any way simian, and then his lackey is drawn in a monkey-like way.”

He sighs. “There’s no nuance,” he says. “If that [cartoon] is immediately gonna be linked with Penny Sparrow … then I’m gonna have to change my approach.”

Voices on social media would agree that a change of approach from the 57-year-old cartoonist is vital. Some pointed out that it is not the first time that Zapiro has linked Abrahams to an ape-like figure.

In September last year, he produced a cartoon showing Abrahams hiring primitive hominid Homo Naledi for a position at the NPA.

Zapiro hit back at the current criticism with a statement in which he pointed out that in a 2010 cartoon for the Mail & Guardian entitled Evolution of Democracy, he depicted all apartheid leaders as monkeys too. This defence failed to quell the flames on Twitter.

Why did he feel that a monkey metaphor for this week’s Abrahams cartoon was his only option? Why not make the same point using puppets, for instance?

“If you’ve done 25 puppet cartoons and 10 other cartoons using marionettes and wind-up [toys] and then you suddenly think of the NPA in terms of organ grinding as a well-communicated cartoon …” he says.

The Abrahams monkey cartoon was not the only Zapiro-related controversy of the week.

Another storm erupted over a Johannesburg private Christian school’s use of a Zapiro cartoon as part of a grade 6 test. The cartoon, produced in the wake of the Nkandla “firepool” controversy, shows Zuma reclining on a lilo amid a pool of money. The schoolchildren were then asked whether they would vote for the depicted individual to be president. One answer in the negative – “because he looks way too stupid” – was rewarded with double ticks, and complimented as “good”.

Zapiro distances himself from this incident, and says that Gauteng education MEC Panyazi Lesufi is right to take action in response to it. “The use of cartoons in exam papers and classrooms and textbooks is something that happens all the time,” he says. “I’ve been approached more times than I can remember.”

In this case, he says, the teacher is to blame. “I think the teacher didn’t get with the programme when she asked if the learners would vote for this person.

“That goes into a different realm, and I’ve never [previously] come across that. Teachers tend to understand that you’re asking for analysis of the political milieu.”

In the course of Zapiro’s career, he has attracted controversy for cartoons countless times.

Perhaps foremost in this category was his 2008 cartoon entitled Rape of Justice, which pictured prominent tripartite alliance members holding down a figure of Lady Justice while Zuma prepared to rape her.

In 2010, a cartoon showing the Prophet Muhammad agonising on a psychologist’s couch: “Other prophets have followers with a sense of humour” earned him threats from South African Muslims.

More recently, the appointment of Springbok coach Allister Coetzee, which appeared to present the twin sports imperatives of “transformation” and “winning” as irreconcilable, earned him accusations of racism.

The cartoonist was a political activist in the 1980s and was detained without trial. He describes himself as a “lapsed” ANC member.

Do the accusations of racism sting?

“It always hurts to be called a racist,” Zapiro says. “I’m always examining myself to see whether those deeply ingrained parts of racism are invisible, or whether I’ve betrayed my progressive aspirations.”

He says the political climate in South Africa has changed to the point where cartoons that would have been acceptable 10 or 15 years ago, are no longer okay. “I actually have to take stock of the new situation in South Africa now, and the particularly heightened sensitivities around race,” Zapiro admits.

“And I think this experiment I’ve been doing with edgy cartooning that tries to take readers with me into a universe where things can be debated in a certain way, is possibly a failed experiment.”

There’s a sense in which his Tuesday statement in defence of the Abrahams cartoon stoked outrage, because it appeared to suggest that those who took offence were incapable of understanding the organ-grinder metaphor.

“That’s not what I was intending to imply,” he says. “I’ve tried to be a good communicator over many years. If I haven’t communicated well enough for people to see that those two figures [Zuma and Abrahams] are contrasting, and not generalisations, then I’ve failed in that communication and I regard the whole exercise as having failed as well.”

Zapiro adds: “I’ve got to find a way to move forward and stay as hard-hitting as I’ve always been, but I will have to do some form of self-censorship if it looks like my instincts are not in line with where we are at the moment. Obviously I have to take stock of that.”

In retrospect, should his statement have been less defensive and more apologetic?

“I probably should have been aware already by [Tuesday] that the tone of my explanation might be a bit strident,” he concedes. “So ja, I’m chastened.”

Chastened or not, Zapiro remains a cartoonist. The only thing that could convince him to give up cartooning, he says, is “if I felt I was becoming an actual cynic instead of an optimistic sceptic”.

Asked if he would consider the Abrahams cartoon the greatest regret of his cartooning career, Zapiro responds: “Perhaps, yes. I don’t want to stand on the podium of free speech and defend something that is clearly so hurtful.”

Is it a mistake he would repeat?

“I find it hard to imagine myself drawing a person of any degree of colour as a monkey again,” Zapiro replies.