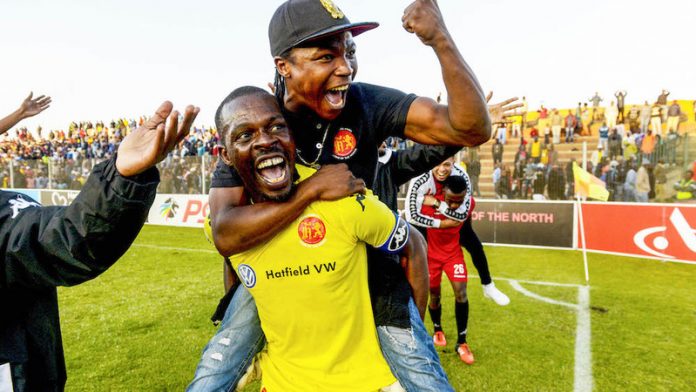 Last week was an eventful one in the international sporting world, so it’s probably not surprising that you missed the news about Highlands Park. Last Wednesday afternoon, by virtue of winning the National First Division playoffs, Highlands gained promotion to the Premier Soccer League (PSL).

This news isn’t as sexy as the best second-half performance in the history of Springbok rugby, admittedly, but to a certain generation it calls to mind an era long forgotten — a footnote only, but a juicy one nonetheless.

The decade under question was the 1970s, when Highlands Park shared Balfour Park, their home ground, with Jewish Guild. As many of us are probably aware, Balfour Park (in the Johannesburg suburb of Highlands North) is nowadays a shopping centre rather than a football stadium, although to dub the ground a stadium is to indulge in a fancy it probably doesn’t deserve.

Backed by a line of pine trees on the south side, Balfour Park was rusty, dusty and difficult to love. The wind licked through the rickety stands and there were pools of limpid darkness into which the floodlights simply couldn’t reach. The grass was always dry, your bum was always itchy and the paint was always flaking. The scoreboard was, well, erratic, if there was one at all.

But if you were 10 or 11, maybe 12, none of the persistent ugliness mattered. Balfour Park was a secret garden, an experience beyond understanding. You paid your entrance, bought a hot dog and Coke and settled down to watch the football with your raucous mates, entering into wagers about the scorer of the first goal.

Across such considerations swooped a more insistent thought: Would you have the courage to wander over to the player’s tunnel in search of a signature from the legendary Des Bakos or Julie Kaplan, or would you pretend you had better things to do?

Our big days at Balfour were Friday nights. Highlands might have been playing Bobby Viljoen’s Lusitano or Cape Town City, anchored by their central defensive strongman “Big Ben” Anderson, and given flavour by the persistent trickery of Frank “Jingles” Pereira, a man with very long sideburns and very short shorts.

Perhaps, though, Highlands or Guild would be playing a less challenging fixture against, say, East London City (another one of Viljoen’s many homes, if I remember correctly) or the intriguing Powerlines, from darkest Nigel. We were told that the Powerlines team was made up of Union Carriage and Wagon employees, engineers and mechanics who designed and built rolling stock. They were all Italians.

Nigel was an Italian enclave, in much the same way that Germiston was a Scots enclave. As Nigel spawned Powerlines, so Germiston served Germiston Callies (home ground: Driehoek). We drank those half-time Cokes for all we were worth because then we could remove the little printed discs from underneath the tops themselves.

Germiston Callies and Powerlines players were mildly interesting but, really, it was Highlands players we were after: Hylton Grainger, Martin Cohen and the slightly older Freddie Kalk.

They were coached by a Scot, Joe Frickleton, variously described as either “dour” or “canny”. The newspapers of the day shared a language called “cliché united”. Here was a world in which defenders were “tough as teak” and any man with greying hair was, invariably, “a silver fox”. Cliché united was a sort of pidgin English designed for sport, not particularly creative but immensely durable. We took to commentating in it ourselves.

Somewhere deep in the misty past, Highlands Park and Powerlines merged and the professional club was eventually bought by Jomo Sono, becoming Jomo Cosmos in the early 1980s.

The amateur and youth divisions of Highlands Park continued, however, with various incarnations of the club languishing in lower-league obscurity.

That, though, is now over. Having won promotion to the National First Division from the ABC Motsepe League just last season, they’ve now done one better and made it into the PSL.

It didn’t start well, Highlands Park only taking two points from a potential nine. But slowly, they marched their way to the top of the league, winning all three of their games in the playoffs. They are now in the garden of the select.

Let’s hope, for old time’s sake, that they decide to play the occasional home game on a Friday night.