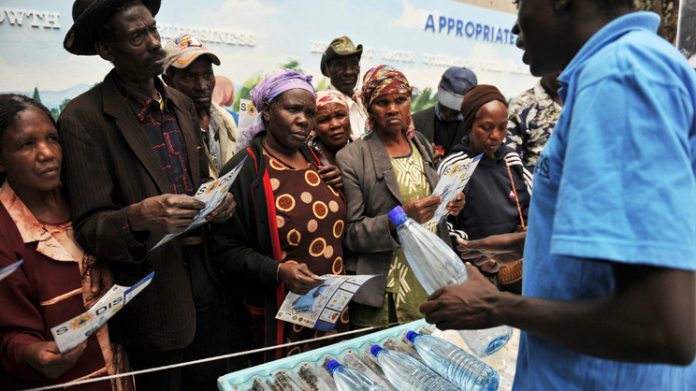 When David Ingavo, a village elder in the Kibera slums in Nairobi, started having persistent stomach problems, he assumed they were normal abdominal aches that would go away with time. He would go to a chemist and buy tablets that soothed the pain, albeit temporarily. But a time came when the self-medication no longer worked.

“The stomach pains were now persistent and more painful,” recalls Ingavo. Dignified and greying, he blinks in embarrassment. “I started to have diarrhoea and had to wrap a towel around my waist after soiling all my clothes. I was unable to walk and had to always remain near a toilet.”

Ingavo was eventually diagnosed with typhoid and amoebiasis.

Typhoid fever is a bacterial disease transmitted through food or drink contaminated by the faeces or urine of infected people, according to the World Health Organisation. Symptoms may be severe and include high fever, headache, diarrhoea and enlarged spleen or liver. Amoebiasis is caused by a parasite also transmitted by faecally contaminated food or water.

“I was given drugs and warned against using untreated water. I was advised to always drink boiled water,” Ingavo says.

Piped water in the slums does get contaminated with sewage and waste water, admits Kibera’s sub-county public health officer, Charles Warutere. “When residents make illegal connections, the pipes sometimes suck in raw sewage or waste water and get contaminated,” he explains. Kibera assistant county commissioner Hesbon Kayesi says providing water is not a problem in the slum, but treating it is. “Whenever there is a leakage in the pipes, water is contaminated. Cholera outbreaks have been reported as a result of this contamination.”

A Kibera resident shows the extent of pollution in the water available to the slum. (Cyrus Kinyungu)

The mistrust of piped water extends to the rest of Nairobi and, indeed, several other parts of the country. This has seen a mushrooming of companies bottling water for the wealthy.  There are 600 licensed water bottling companies in the country, according to the Kenya Bureau of Standards.

Recently, the bureau suspended the licences of 369 of these companies because of a rise in counterfeit or substandard bottled water products that may have posed a risk to human health.  However, for the majority of Kibera’s residents, who live on less than a dollar a day, the bottled water is not even an option: it sells at an average price of KSh75 ($0.75) a litre. Like Ingavo, most slum-dwellers can’t afford to buy the fuel to boil their drinking water.

But these problems, Ingavo says, no longer affect him. He shields his eyes as he gestures towards the rusty iron sheet roof of his mud shack, where an array of shining plastic bottles are basking in the Kenyan sun.

“I always have around 15 of them up there,” Ingavo proclaims.

His entire family’s health depends on these bottles. Each is filled with water and laid down horizontally in direct sunlight for at least six hours. As simple as it seems, this is a highly effective water treatment solution developed by Swiss scientists that has helped to solve Kibera’s water treatment problems.

“When I learnt of Sodis, I was very excited, as I escaped from the high cost of boiling drinking water daily. I carry the water even when travelling,” says Ingavo. The science behind Sodis is straightforward: when clean, clear plastic bottles are filled with water and set out in the sun for six hours, the UVA rays in the sunlight kill germs such as viruses, bacteria and parasites.

The water has to be relatively clear, says Naimo Abdulahi, executive director of the Savo Foundation, which has been promoting Sodis in the slums since it was introduced there in 2004. The bottles, which must be colourless and transparent to allow in light, must hold less than three litres.

The Savo Foundation mostly targets mothers and children under five, according to Abdulahi. “They are the most vulnerable to waterborne diseases like cholera, typhoid and amoebiasis. They also spread the message to schoolchildren and make them goodwill ambassadors of the Sodis technology. Health clubs help promote the idea.

“We are covering 21 schools within the Kibera slums and at least 2 500 households within the slums,” says Khadija Swaleh, the foundation’s programme co-ordinator.

Josphat Kaleka, a teacher at Adventure Pride Centre, a school in Kibera, says Sodis has helped to reduce the constant absenteeism caused by illnesses.

“Before, students used to get sick with stomach problems but after we adopted Sodis the incidences have been reduced,” says Kaleka.

Children in Kibera slum benefit from using the Sodis water disinfection system so they do not get sick and have to skip school. (Cyrus Kinyungu)

According to Abdulahi, the biggest problem is providing the schools and households with empty plastic bottles. “We are unable to meet the demand for bottles. We have asked several hotels in the city to give us used water bottles, which we clean and distribute to schools,” she explains. Only five hotels have done so.

Mistrust between neighbours is another hurdle. Leah Kivoni, an elderly woman living in Kibera, only places her water on the rooftop when she is at home. When she leaves, she takes her water to a trusted relative who takes care of it while it remains exposed to sunshine. “I wouldn’t trust anyone with my water. You may not know who wants to poison you,” she says as she gulps water from a 1.5-litre bottle.

The foundation also has to contend with residents whose religious beliefs forbid them from using water exposed to light.

Despite these problems, Sodis has helped to reduce cases of waterborne infections in the slums, Abdulahi says. A quantitative field study conducted from 2005 to 2006 in Kibera and submitted at the WHO conference in 2008 found that there was no diarrhoea in most (84%) households that used Sodis. More than two out of three households that did not use the Sodis method (69.7%) reported incidences of diarrhoea.

Similar results have been seen elsewhere. More than two million people in 28 developing countries use Sodis for daily drinking water treatment, according to the Centres for Disease Control and Prevention.

In the Kibera slums, Ingavo has become known for telling anyone who wants to listen — and even those who don’t — about the benefits of his plastic bottles. “At times I am forced to tell my story to make people understand the dangers of untreated water,” he says. “I help educate them. As an elder, I have to.”

It is usually the most vulnerable in society who are most dependent on local authorities, yet they are the ones stealing from the poor
Read more
Africa

Covid-19 and the call for solidarity: Challenges for informal settlements

It is difficult for residents of informal settlements to follow guidelines to prevent Covid-19 transmission, such as hand-washing, in the absence of access to water. It is governments’ responsibility to provide these basic services
Read more
Advertising