Why the DA is contesting Dudu Myeni’s reappointment 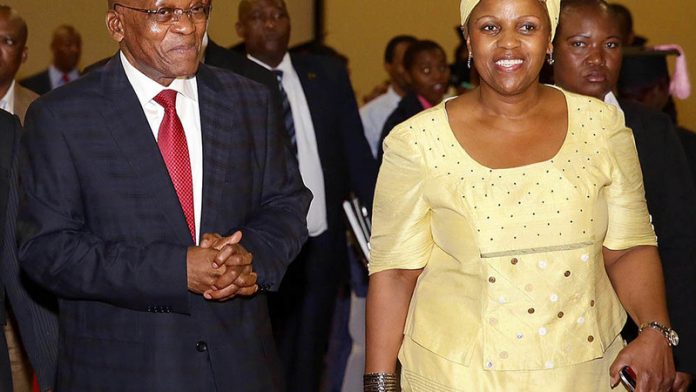 Dudu Myeni, controversial SAA chairperson who was reappointed in the position on Friday, has a record of financial mismanagement, even from before she was first appointed to the position, the DA revealed.

At a press conference held at parliament on Monday, the party’s federal executive chairperson James Selfe, said Myeni failed to adequately perform her tasks as the chairperson of the Mhlathuze Water Board. Other “shocking elements” of her record included:

– A failed probity test, which showed a default judgment against her in relation to R416 460 owed to Absa bank;

– A R1.7-million judgment in favour of Standard Bank with regard to a property she reportedly co-owns; and

– A Special Investigating Unit (SIU) probe into alleged maladministration and abuse of state resources, unfair dismissal of staff and non-compliance with tender processes when she was chair of the Mhlatuze Water Board.

“Even before she was appointed to SAA chairperson back in November 2012,” Selfe said, “there were question marks around her fitness for the job.

“Yet she was still appointed in a deliberate act of cadre deployment and nepotism.”

At its press conference, the DA reiterated its intention to file an application to the Western Cape High Court to have the Myeni’s reappointment set aside.

“[Myeni’s] reappointment not only reeks of nepotism and cronyism so common under the administration of President Jacob Zuma,” said Maimane, “but also flies in the face of the need for good governance at state-owned enterprises.”

The DA will specifically focus on the “rationality” aspect of Myeni’s reappointment. The party has won similar court cases, such as that of Former National Prosecuting Authority (NPA) head Menzi Simelane when the Supreme Court of Appeal ruled his appointment was invalid in 2011.