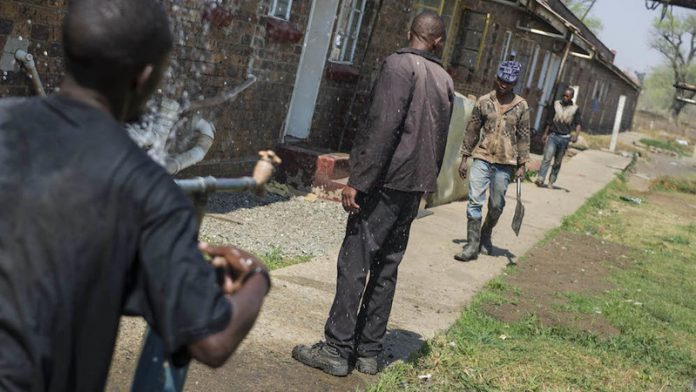 Jerome Matsinhy clutches a padlock tightly in one hand as he poses for a photograph in his one-bedroom home. A battered blue Nokia, held together with adhesive tape, is in his other hand. The lock is for a chain on his front door – its knob has long gone – and his phone is his only contact with his family in Mozambique.

Now he makes a living by collecting scrap metal; he can get R1.50 a kilogram, which yields about R400 a month.

Matsinhy is a victim of the collapse of Aurora Empowerment Systems, owned by Khulubuse Zuma and others. Aurora was appointed to run Grootvlei while it went through liquidation in late 2009. But, by March the following year, it closed and the 5 000 workers at Grootvlei and Orkney – Aurora’s other charge – were out of jobs.

VIDEO: Will Khulubuse’s R23-million be enough to better the lives of former Aurora miners?

Little now remains of Grootvlei, in Springs, about 60km east of Johannesburg. The shafts and mine machinery have gone, stripped when Aurora was in charge or by people afterwards. Now the area is criss-crossed with new diggings by illegal miners – zama zamas.

Dozens of them work, scattered across the yellow landscape, looking for a speck of gold that could tide them over the month. They run and hide at the slightest sighting of an outsider.

An unmarked Nyala is parked in the middle of the operation, charging down the gravel road when an outsider lingers for too long.

A few hundred metres away, the gravel road turns into a neat, brick-paved road – the site of the mine houses. Surrounded by towering trees, these red-brick buildings are now home to people like Matsinhy.

Those with IDs survive off state grants – either because of their children or once they are of retirement age. Foreigners who migrated here for mining jobs – mostly from Mozambique and Lesotho – have to find other ways to make a living.

Even those here legally have been around for so long that their documents have expired and, without a good income, are too expensive to replace.

That’s why Matsinhy hasn’t seen his children, and now grandchildren, in Mozambique since Christmas 2009, before the mine closed. When he has airtime, he calls home.

The state provides water standpipes and portable toilets, whose orange plastic stands out harshly against the green vegetation that has grown after it was burned.

But the zama zamas take the water – an orange pipe leads off into the bush, towards the yellow mountain of Grootvlei’s tailings dam.

Gina Mtimkulu doesn’t want to talk about the miners. She came here in the 1990s but lost her job when the mine was liquidated.

Now she stays in red-brick house number 22, living off the two R700 grants she gets for her children. “Nobody has jobs here but we have to manage. It teaches you to survive.”

She has been to the seemingly endless meetings that have been held since 2010, but is still waiting for back pay and other money that is owed to the miners. “Those people [Aurora’s directors] took Grootvlei and broke it so now everyone who came here is lost,” says Mtimkulu.

Their only skills are in mining, and mining has left this part of the world. Now only illegal miners and old mine dumps remain.

The mining has led to turf wars. Last year, 15 zama zamas were killed in three days. That’s when the street came together and created a committee to speak to the municipality. Services are sporadic, but things are improving. An ambulance arrives shortly after Mtimkulu speaks, its occupants coming to look after a patient. A woman stops weeding her vegetable patch – all the homes in Grootvlei have a garden – to watch.

Across the road from Mtimkulu, Happy Mpho leans on the counter of his corrugated iron spaza shop, also watching.

Happy Mpho has found another way to make a living. (Delwyn Verasamy, M&G)

But his relaxed posture quickly changes as a Balaclava-clad man comes up and gives him a worn R10 note in exchange for a loaf of brown bread. Balaclavas are common here – as is the scratching of spades and the swirling of muddy water in pans by miners searching for specks of gold. Mpho notes the sale in his big ledger. Records of the sale of his wares – from cigarettes to cheaper versions of popular biscuit brands – are entered so he knows how much to buy. “Life here is tough for everyone. When they closed our mine, we all lost our jobs so now people use the skills they have.”

So a gold production line has formed at Grootvlei’s old hostel, a hundred metres away. Buckets of earth are mixed with water and sifted through – from big buckets to ever smaller ones until the residue ends up in yellow enamel plates. This residue is mixed with vinegar and then wrung out in porous black fabric from an umbrella.

On this occasion, a single gram of gold is the outcome – worth R470. “I am a tycoon,” jokes the miner.

His colleague stops with a bucket of earth, answering a few questions in return for conversation. “I moved here for the mine from Mthatha but then it closed. We read that they [Aurora’s directors] took everything.”

He is still owed a few months’ salary. He has to continue mining to earn enough money to send home. “These people give us no option.”

Zama-zamas take their chances rather than starve