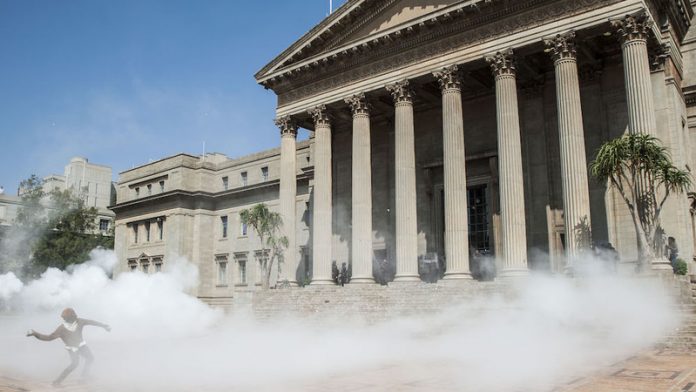 COMMENT
When they’re out in the streets, students in the #FeesMustFall protests seem united. But internally, their movement is fractured along political lines that might take the fight out of the crusade for free education.

“There’s a lot of division among students. Some of them don’t know what they are protesting for: some want free education, for others it’s about [low] fee increments,” said 20-year-old Sibusiso, a second-year economic science student at the University of Witwatersrand. He asked not to be identified by surname for fear of repercussions.

Sibusiso was among hundreds of Wits students who gathered on the steps at the university’s Great Hall on Wednesday evening to take a breather after police had fired stun grenades and rubber bullets at them.

He managed to emerge from the violence unscathed — a different outcome from the previous day’s chaos, when he had been hit by a rock.

He has put his body on the line for the movement — to the point where he has a rock-gashed leg and has outrun rubber bullets — but Sibusiso doesn’t believe in #Fallist promises.

The movement, he says, is being slowed down because the Economic Freedom Fighters Students’ Command and the Progressive Youth Alliance (PYA) — an ANC-aligned party — waylay mass meetings with verbal clashes over power.

Party politics is strongly embedded in the fabric of Wits, but in October 2015 students were largely able to set aside their allegiances. Shaeera Kalla, the PYA and students’ representative council president at the time, and Vuyani Pambo, the EFF student leader on campus, stood united to bring Wits to a standstill with thousands of their peers.

On Monday, after students listened to Higher Education and Training Minister Blade Nzimande announcing that universities could decide on fee increments of up to 8%, a mass meeting was meant to take shape.

Simamkele Dlakavu, an EFF-aligned student, was booed by the crowd — but they listened patiently when outgoing PYA and Wits SRC president Nompendulo Mkhatshwa spoke after her. On Tuesday afternoon, the students would also boo Mkhatshwa, prompting her to drop her loudhailer in exasperation.

Amid the heckling, the scramble for the loudhailer and the attempts to shout each other down, there has been little room to talk about free education, what it means, how it will be achieved or who will get it.

Beyond suspending campus activities and marching around the university — and beyond — to gather students, the Wits protest has presented no strategy. On Tuesday one student sat down to take a break after the group had walked a few kilometres, then remained behind when the other students marched on, saying: “Everything is too unplanned.”

“With the current segregation, I don’t feel like we can accomplish anything. People are grouping themselves into different groups. If we all came together as one team, we could accomplish a lot,” another 18-year-old student told the Mail & Guardian.

Meanwhile, at other universities around South Africa some students appear frustrated that their movement is being led by SRCs that they believe are marching to the ANC’s tune — or by those seeking to be celebrities in the protest.

When the University of KwaZulu-Natal shut down earlier this month, students went ahead and protested, but many of them did so tentatively because they distrust the SRC.

When the university’s SRC failed to react immediately to Nzimande’s statement, one student commented: “Where is our SRC? I wonder how much they got paid.”

At the University of Cape Town, the movement is largely led by students from the Pan African Student Movement of Azania, one of whom, Masixole Mlandu, is running for SRC president.

Earlier this year, Mlandu was kicked out of a building that students had occupied because women, gender-nonconforming and homosexual activists considered him to be one of a chauvinistic group.

“We can’t keep talking about free, decolonised education and yet here we are again. We cannot keep having conversations about intersectionality, patriarchy, gender, sexuality, even about class. We were there last year — us black womxn, black and differently abled, black and trans, black and queer,” said Alex Hotz, a student who was expelled from UCT following a protest during which artworks were burned, on her Facebook page.

Wits may have a new, powerful woman student leader in Busisiwe Seabe, but even she has been shouted down for choosing flight over fight on Wednesday, in response to police threats.

This latest #Fallist action is different and it is a lot less certain.

The fight for free education may be worthwhile, but even students like Sibusiso aren’t convinced. When asked why he is involved, he replied: “I’m just waiting for the food.”