Me and my meds: It’s a fraught friendship

Wake up up. Shower. Brush teeth. Take antidepressants. This is my morning routine.

It’s often underestimated just how many of people are on chronic medication, whether for their mental or physical .

Mental illness, cardiovascular disease, diabetes and other noncommunicable diseases account for 18% of the country’s disease burden, notes a 2009 study published in The Lancet medical journal.

Almost one in 10 men and almost twice as many women were living with high blood pressure in when the country’s more recent comprehensive Demographic Health Survey was released. Almost equal proportions of men and women reported taking medication regularly.

I never hated my medication, but I didn’t like the idea of having to take it to be functional and happy.

After two years of being on antidepressants, I went off them for a few months, but those few months were also the beginning of my first year of university. I was away from home, overwhelmed and alone, and my grandfather died. While crying on the phone to my mother one night, she said it sounded like I needed to go back on my antidepressants.

So I did. I would wake up in the morning, I would have energy in the day, and I would even make my bed. My medication felt like fuel for my brain.

Society often constructs “being healthy” as not being dependent on daily medication. Many of us don’t fit into this neat little box.

Take a look at how people relate to the constant companions in their pill boxes and pockets.

I was diagnosed with multiple sclerosis in August last year. I have to inject myself with my medicine three times a week for the rest of my life until they find better alternatives or a cure.

It’s a paradox, my relationship with the needles.

I try to ignore them and pretend they don’t exist; that I don’t have a debilitating disease. I haven’t made peace with the information yet. It’s only been about a year.

All I’ve done is carry on and not allow it to get in the way. But those needles confront me every time I look in the fridge. Every second day, they’re there, waiting to be taken, reminding me there is something wrong inside my body.

They hurt and sting. I hate any type of pain. I know, if I don’t take them, I can’t help myself in any other way. I can’t stop my body from attacking my own nerves, I can’t stop the phantom itches, the fatigue. 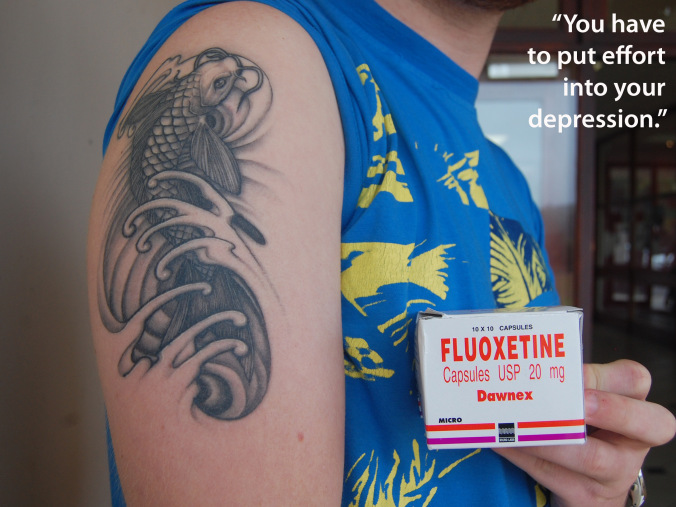 I’ve been on Prozac for three years to treat my depression. It’s had its ups and downs. Most of the time I feel it’s helped a lot and I’ve accepted I will be on medication for a part of my life.

You get used to it. It’s more common than people think. People think medicine is a quick fix, but you have to put a lot of effort into your depression and accept that it’s something you deal with every day.

I got this tattoo as a way of externalising the depression and as a reminder that depression is very real and can happen to of us. The story of the koi fish in Chinese culture is that the koi swims upstream and when it reaches the Dragon’s Gate waterfall, it transforms into a dragon.

It symbolises self-actualisation and strength. The direction — upwards — symbolises the fact that you’re still fighting because you’re going against the stream and obstacles in the river. The black koi specifically symbolises issues such as depression, addiction and suicide.

I take Eltroxin for my underactive thyroid and I’m also taking Camcolit, or lithium, for my bipolar disorder. Eltroxin gives me really bad anxiety so it’s not exactly my greatest friend because I’ve already got really bad anxiety.

Even though I never knew I had an underactive thyroid until this year, I can already feel my digestive issues becoming a lot better. I’ve got a lot more energy and I can do tasks without getting so tired all the time.

The lithium is doing really well for me; it’s definitely helped me stabilise. It makes it easier to be happy or easier to be okay with things. It’s one of those things that gets me out of bed, helps me function the whole day and I don’t get negative obsessions.

I still have quite bad mood swings but they’re not happening every single day, rather only once a week or every two weeks.

It’s a very weird relationship I have with my medication.

I’ve been taking Concerta since grade 10. Before I had been taking Ritalin. Concerta’s a lot different from Ritalin; it has side effects but the medication itself lasts longer. The fact that I don’t sleep bothers me a lot. I can’t take naps in the day and I love naps.

I’m trying to figure out how to deal with the anxiety, the loss of appetite and just the general nitpickiness when it comes to dealing with the side effects more than anything else.

As much as I say I hate my medication, I have to take it or else I will fail. And I don’t want that. 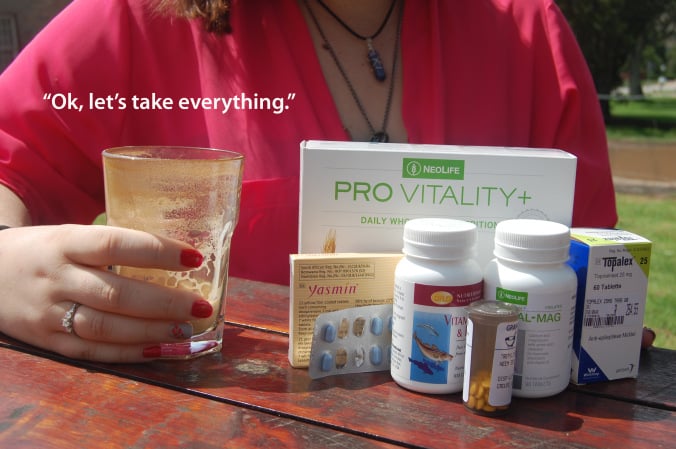 I’ve been struggling with chronic headaches since 2010. Eventually I went to a neurologist, who found nothing was physically wrong. She put me on Trepiline, which worked but I had to go off the Trepiline because you can’t be on it forever.

The headaches were gone for about three months and then they came back. Now I am on Topalex and Trepiline, as a short-term plan. I am on Yasmin to keep my [menstrual] cycle regular and to treat polycystic ovary syndrome [a common hormonal disorder]. I was also put on anti-depressants halfway through my second year in university.

The Topalex, Trepiline and Yasmin I’m okay with taking because I know they’re actually making a difference, but they are short-term solutions. I want to know what we’re going to do in the long term. At this stage it’s a morning routine. It’s just, “okay, let’s take everything and go on with our day”. 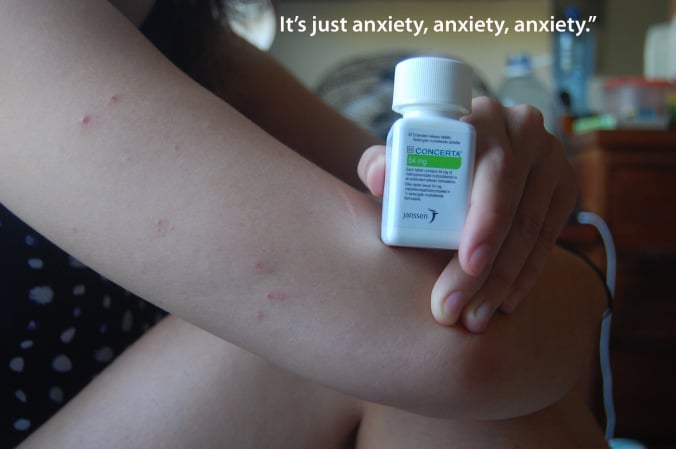 I take Concerta. I’ve been on some form of Ritalin since grade two. I changed to Concerta between grade seven and eight and I’ve been on it since then. It’s a love-hate relationship.

At first I hated it because I thought there was something wrong with me but, as I’ve got older, I’ve kind of got over that. It has really helped me and I know that I wouldn’t be where I am today if I hadn’t been taking it.

But it got in the way of a lot of friendships and it’s really hard to maintain friendships or even make new friends purely because of the side effects that make you so antisocial or depressed or anxious. It’s also given me quite a bit of issues with weight because I just can’t eat on it and I’ll start binge eating over the weekends when I don’t take it and then not eat the whole week.

It gives me very bad anxiety and mood swings like you cannot believe. I get very anxious and I tend to fixate and sometimes pick at my legs and my skin to the point where I actually hurt myself. And it’s really strange because I can’t stop, because when I stop it’s just anxiety, anxiety, anxiety.

My relationship with my medication is terrible. I never take my antidepressants.

I don’t think it messes with me mentally, although my mother says she can see a difference when I don’t take my meds. [Skipping them] makes me quite sick and then I take them again.

So my relationship with my antidepressants is really awful because for some reason I don’t always like to take them. It makes me feel very dependent.

At the other extreme, I’m very dependent on Xanor for my anxiety because it really helps to calm me down. I tend to take it more than my anti-depressants but I have become better with controlling when I take Xanor.

Sometimes I would pop it every morning, and it makes you quite sluggish and tired, but at the same time it calms you down so it makes you feel like you can do more things without getting that anxiety. But now I’ve kind of limited it to night time and before I go out to parties with friends and stuff.

Amy Pieterse is a third-year journalism student at Rhodes University. This photo essay is based on first-person accounts of people who use chronic medicine. Their experiences of the medication and its side effects is based on solely on their personal experiences.