No fats, no femmes, no blacks: The unbearable racism of Grindr in South Africa

On any given day, 1.6-million users in more than 192 countries send more than 70-million messages and 5-million pictures to each other on Grindr, the now seven-year-old gay social networking app. As of Grindr’s fifth anniversary on March 25 2014, the app had achieved more than 10-million user downloads and had more than 5-million active monthly users worldwide. In January 2016, Grindr announced that it sold its 60% stake to a Chinese gaming company, Beijing Kunlun Tech, for $93 million.

The dating app has grown exponentially since its launch. Unfortunately, given the sheer size and reach of its user base, there are incidences where racist and bigoted users who use “preference” as a catch-all disclaimer for atrocious behaviour. Grindr has been criticised for not taking sufficient action to prevent the display of offensive, racist, and homophobic language by some users. In 2014, the app’s creator, Joel Simkhai, said in an interview with the Israeli newspaper Haaretz that he “didn’t like it” but he “[isn’t] a sixth-grade teacher” and it “[isn’t his] job to police such things.

“Vanilla and spice than chocolate and rice”. “Not into chopsticks [or] “Blacks keep movin’ cuz I ain’t interested unless you can prove not all blacks are the exact same” read some of the profiles featured on Douchebags of Grindr, a Tumblr page dedicated solely to naming and shaming problematic people on the hookup app. “Not into Eskimos. Sorry, just a preference” reads another.

Earlier this year, an Australian medical student shone a light on racism on the popular dating site. Dustin Mangatjay McGregor documented the prevalence of racism in Australia’s gay community, particularly online. Like many young gay men, McGregor began using dating apps like Grindr since its inception. His use of the app has left him with the realisation there’s a hierarchy in the gay community, just as in society at large. 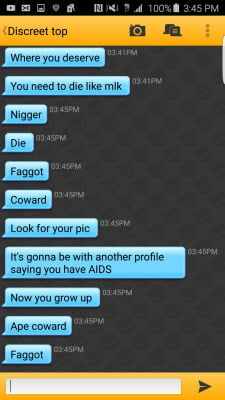 South Africa is no exception to racial bias. Linda*, a black South African who used the app, says he’s been subjected to racial slurs and dubious questions ranging from his physique, cleanliness and HIV status. Linda says he has also experienced the other side of the sexual racism coin – racial fetishisation. He’s had to field questions about his penis because “the assumption is all black guys have big dicks and just want to have sex”. He is one of many who has since deleted the app because they could no longer put up with what he calls “nonsense”.

Another man who declined to be named, says: “I don’t use Grindr as effectively as I should but I have met some cool guys from the app. I have experienced the ‘no fats, femmes, blacks’ thing personally but never internalise that toxic behaviour because I know and understand the greater cause.

“I find that different locations showcase different types of prejudices in gay men all over but the no fats, fems or Blacks or Asians seemed to be the prevalent universal feature for a lot of white gay men who believe themselves to be ‘straight acting’, gatekeepers of oppressive structures and/or aspire with the deepest hearts to emulate cis-gendered heterosexual men.”

He continues: “This, of course, is impossible in a gay environment so I always used to shrug it as self-hating gays who are racist above everything else. I am a generally androgynous guy who is both feminine and masculine and depending on the mood, time, day, and situation and am not ashamed of it. So when you are like that, a lot of gay men either feel threatened by you or super exposed because then other people will know that they are also gay and it would ruin the ‘Oscar-winning’ performance of being ‘straight acting’.

“I know many friends who have suffered greatly from pandering to self-hating “straight acting” gay men until they realised there is a block button and no one needs to be subjected to that. I think in our country, we still struggle to come to terms with decades of oppression and so many of these guys internalise what society deems to be acceptable. At the same time, there is this unrealistic ideal that many gay men share of what a man is supposed to be. We see it in clubs that emulate jock straight culture and those are usually the places where non-white people are also made to feel unwelcomed. I blame this on the larger scourge of society, the stupid effects of patriarchy and how women were perceived as weaker or that there is no power in the feminine.

“Those people are usually a very weak representation of society and because of their own insecurities and prejudices, they take it out on the most obvious target, effeminate gay men. This becomes so clear when you experience non-white gay men also thinking it’s a preference to be attracted to skinny, white people only with no feminine traits, meanwhile it’s racism and internalised homophobia. You see the same behaviour with men in the closet or “after 9s”. Their fear and repression is so great that they don’t see that they sound like homophobic, racist pigs in the most inappropriate environment. This is where the block button comes in handy.”

Matthew*, a South African based in the UK, explains that when he came out as a gay man, he thought life in the homosexual community would be more inclusive. In 2004 when he was a shy 16-year-old, dating was centred in online chat rooms as Grindr didn’t yet exist.

In 2008, Matthew moved to Cape Town and began to experience discrimination in gay spaces from bars, clubs to steam baths. Initially, he chalked it up to his physical appearance thinking his body type was the cause. However, when relating this to friends and acquaintances he was introduced to the notion of sexual preferences. “I had never heard of this but they went on to explain that they do not find non-white people sexually attractive. I asked them what it was about the dark skin that turned them off (without phrasing it in the terms of racism) because some people get turned off the convo as soon as you mention that word. They could not give me a definitive answer apart from they could not control who they were sexually attracted to.”

“I thought this was a weak cop out so when it came to online dating in the form of Grindr people were initially not exclusionary to people based on race. You would reach out to someone and they just wouldn’t get back to you. What surprised me is that this keep going on for quite some time. So I devised a plan where I removed my race, and took a photo that you could not identify my racial category and the message started to pour in. (The Blind Test). Then I engaged with these people about their issues on race and most of them had not given their racial discrimination a second thought. It’s just who they were and I should not encroach my “radical views on them” because they could not control who they are attracted to.”

A few year later, people started to get quite vocal about who or what they are not attracted to: ‘No fats, no femmes, no shorts. Whites only. Don’t lecture me it’s my preferences’. I knew what their standpoint was and had tried to change it so many times in my own friendship circle and failed that I stopped engaging with people on the issues of race, femininity, weight or height.”

Racial preferences are often dismissed as a legitimate and indelible aspect of sexual individuality and identity, to the point where questioning them is heavily demonised. The response to questioning racial preference is usually gaslighting using the reason of threatening someone’s personal expression with irrational and unnecessary political correctness. The same is true of fetishization albeit in a more insidious way. Racial fetishization is racism that’s framed positively. Seeing it and calling it out is hard but it is still based on stereotypes, like the idea that “all black men have large penises.” We live in an unequal society where our biases and prejudices are susceptible to broader social and political beliefs. It’s hardly surprising that racism should colour our desires as well.

While those who practice sexual racism may see what they do as separate from being overt, in-your-face racism, recent research suggests otherwise. A study published in the October 2016 edition of Archives of Sexual Behavior argues sexual racism “is closely associated with generic racist attitudes, which challenges the idea of racial attraction as solely a matter of personal preference.”

A preference, for example, would be something like preferring tall men over chubby men. Discounting a person based on their race, however, goes beyond simple preference. It’s important to remember that being part of a marginalised group does not excuse nor erase exclusionary behaviour.

Gabe Gonzales, of  news website Mic, believes that racist gay men have become the “fresh, new face of the same reliable racism of yesteryear,” in America, aligning themselves with Donald Trump in the lead-up to the 8 November US election.

In this video, Gonzalez takes racist gay men to task, pointing out the diverse and divisive history of black and minority ethnic people who fought for basic human rights including the Stonewall Riots. He then goes on to criticise racial sexual preferences, outlining how it goes beyond “just a preference.”  Watch below:

*Names have been changed to retain anonymity

Institutional racism is still alive and kicking in the workplace

Trump: I’m not a racist