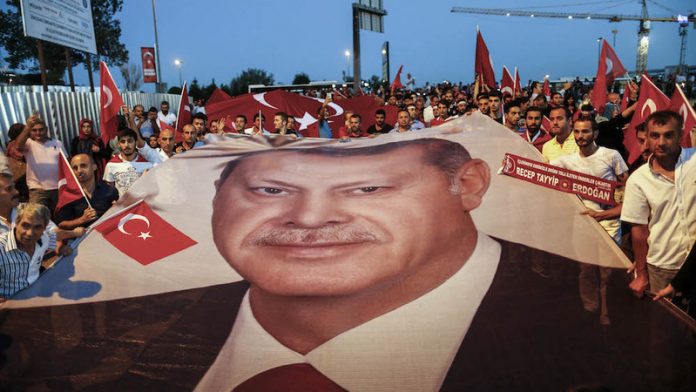 Turkey on Sunday suspended non-immigrant visa services at all Turkish diplomatic facilities in the United States, in a tit-for-tat move amid escalating tensions between the countries.

Just hours after the US mission in Turkey announced it was applying visa restrictions, the Turkish embassy in Washington, DC, hit back with an almost identical statement.

“In order to minimize the number of visitors to our Embassy and Consulates while this assessment proceeds, effective immediately we have suspended all non-immigrant visa services at all Turkish diplomatic facilities in US,” read the statement on Twitter, echoing an earlier announcement by the US mission to Turkey.

The Turkish embassy said the measure would apply, with immediate effect, to visas in passports, as well as e-Visas and visas acquired at the border.

The US move, meanwhile, means that Turks will not be given visas to visit the US unless they are planning to move there.

Earlier on Sunday, the US mission in Turkey said that recent events had forced the US government to reassess Ankara’s commitment to the security of US facilities and staff.

The Turkish embassy in Washington later offered the same explanation, only replacing the country names.

The escalation in diplomatic tensions between the two NATO allies comes a few days after the arrest of a US consulate employee in Istanbul for alleged links to Fethullah Gulen, a US-based Muslim leader blamed by Ankara for a failed coup attempt last year. Gulen denies involvement.

Washington said it was “deeply disturbed” by the employee’s arrest.

It said he was arrested late on Wednesday on charges of espionage and attempts to damage the constitutional order and Turkey’s government.

Turkey has pressed, so far in vain, for the US to extradite Gulen, while tensions have also risen over Washington’s military support for Kurdish YPG fighters in Syria.

The YPG group is considered by Ankara to be an extension of the banned PKK, which has waged an armed campaign for three decades in southeast Turkey.

Meanwhile, members of Turkish President Recep Tayyip Erdogan’s security detail were indicted by US authorities after clashes with protesters during an official visit this year, infuriating the Turkey’s leader.

“It’s clear that this [suspension of visa services] is just one more ratcheting up of the war of words between the US and Turkey,” Al Jazeera’s Tom Ackerman, reporting from Washington, DC, said.

Ackerman said that Turkish authorities “had imprisoned more than a dozen American-Turkish citizens” living in Turkey over the past year or so, including an Izmir-based Christan pastor.

Missionary Andrew Brunson, who ran a church in the western city of Izmir, has been held by Turkish authorities since October 2016 on charges of being a member of Gulen’s group.

“You can see that this more than just the accusations about one man in the Istanbul consulate,” Ackerman said.

“Obviously, tensions are mounting and the relationship is on rather tenuous grounds at this point,” Al Jazeera’s Diane Eastabrook, also reporting from Washington, DC, said.

“This has repercussions throughout Europe and the Middle East, so it will be interesting to see how this plays over the next few days,” she added.