Gavin Mitchell is visibly exhausted as he cools down from delivering another blazing sermon on the walkway outside Durban’s City Hall on a fiercely hot November afternoon.

He is bathed in sweat from the physical, mental and spiritual toll of the sermon, pitched at lunchtime passers-by. The 58-year-old former postman is clearly undernourished, almost skeletal. The effort he has thrown into the 15-minute exhortation on fire and brimstone has left him dehydrated.

Mitchell, the last — and perhaps most manic — of Durban’s street preachers, kicks off his worn flip-flops and settles down on one of the wooden benches lining the walkway to catch his breath. The “outies” sitting on the garden’s retaining wall and on the other benches watch impassively. One or two are nodding off, testimony to their addiction to whoonga, Durban lingo for the low-grade heroin mixture they have smoked in the Cenotaph garden.

Mitchell, who delivers a five- to 15-minute sermon daily, is done for the day. His sermon has been short — a homage to the ball of fire overhead — but he is happy to talk about the ministry that led him to sell his house in Umbilo 24 years ago and take, literally, to the streets.

“God called on me to preach here. I started preaching at the age of 18 and preached for three years. I started my own church and ran it for 10 years. Then I got a major revelation from God that Christ is outside the church, not inside it, and that I needed to leave the church and take up full-time ministry.”

As Mitchell was heading home from his job at the Liberty Square post office, he took a detour past the area where he now preaches.

“The spirit of God fell on me, again and again, from the minute I took my first step on the square. I knew what God wanted me to do.” 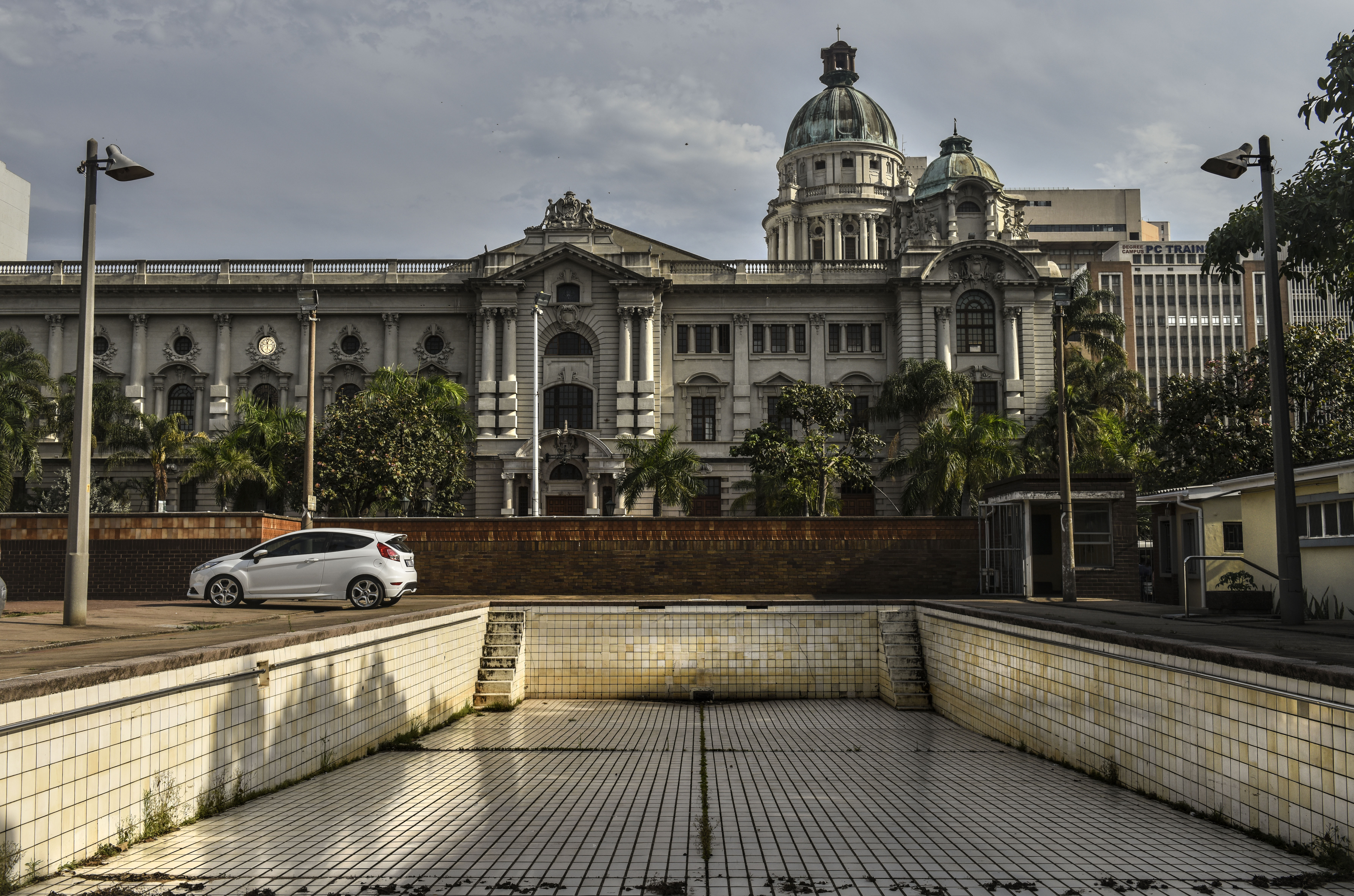 God’s choice of spot is an interesting one. The City Hall walkway has served as the endpoint for countless protest marches, both during the apartheid years and in the current dispensation. Flanked by the iconic Royal Hotel and the main post office, it’s one of Durban’s least visibly transformed spaces. At the same time, it’s one of the most shared. City councillors, junkies, street vendors, office workers, hipster professionals on their way to adjacent gentrified buildings — all tread the same stone.

The Cenotaph garden is the daytime haunt of scores of homeless people who wait there for the morning meal served at the St Paul’s Church behind the old municipal pool and Medwood Gardens. Mitchell eats his first meal of the day there when he doesn’t have food in the Overport outbuilding his son rents for him. Mitchell eats his second meal before leaving. The open-air kitchens that operate in the courtyard between the swimming pool — soon to become a metro police base — and the post office give away their leftovers when they close at 5pm every day.

“When I was married to my second wife I had a very comfortable life. She supported me. Then she decided I was a false prophet and divorced me.”

Mitchell believes God was behind both his divorces.

“I have been divorced twice because of God calling on me. Marriage is totally out of it now. After the second I was left so full of love for God, I don’t want anything else.”

Mitchell is the only preacher left on the City Hall steps these days. When he started, in the 1990s, there were at least half a dozen who spread the word in the streets. Then Mitchell was more heavily built, his lank mullet hadn’t given way to a receding hairline, his face was less weather-beaten.

“There were quite a lot of us then. All the others are gone now. They have given up. This is a hard life. You live by faith, on belief.”

Mitchell still preaches five days a week. There’s not enough foot traffic in the area to justify coming to town on Saturday or Sunday. He takes leave every December to spend time with this son of his from his first marriage, the one who pays the rent for his room.

When protest marches take place, he gives himself the day off.

“There have been a lot of marches here over the years. I go home. I don’t have a lot of interest in what they are doing. Those are worldly issues, not mine.”

Mitchell is scathing about the evangelical churches that occupy many of the storefronts in the central business district near the City Hall, saying their pursuit of material wealth is the antithesis of God’s word.

“How can a man of God be preaching about money and looking for material goods? God is outside the churches, on the streets here. What I preach is the real thing, far deeper and far more in touch with God that what they can do.” 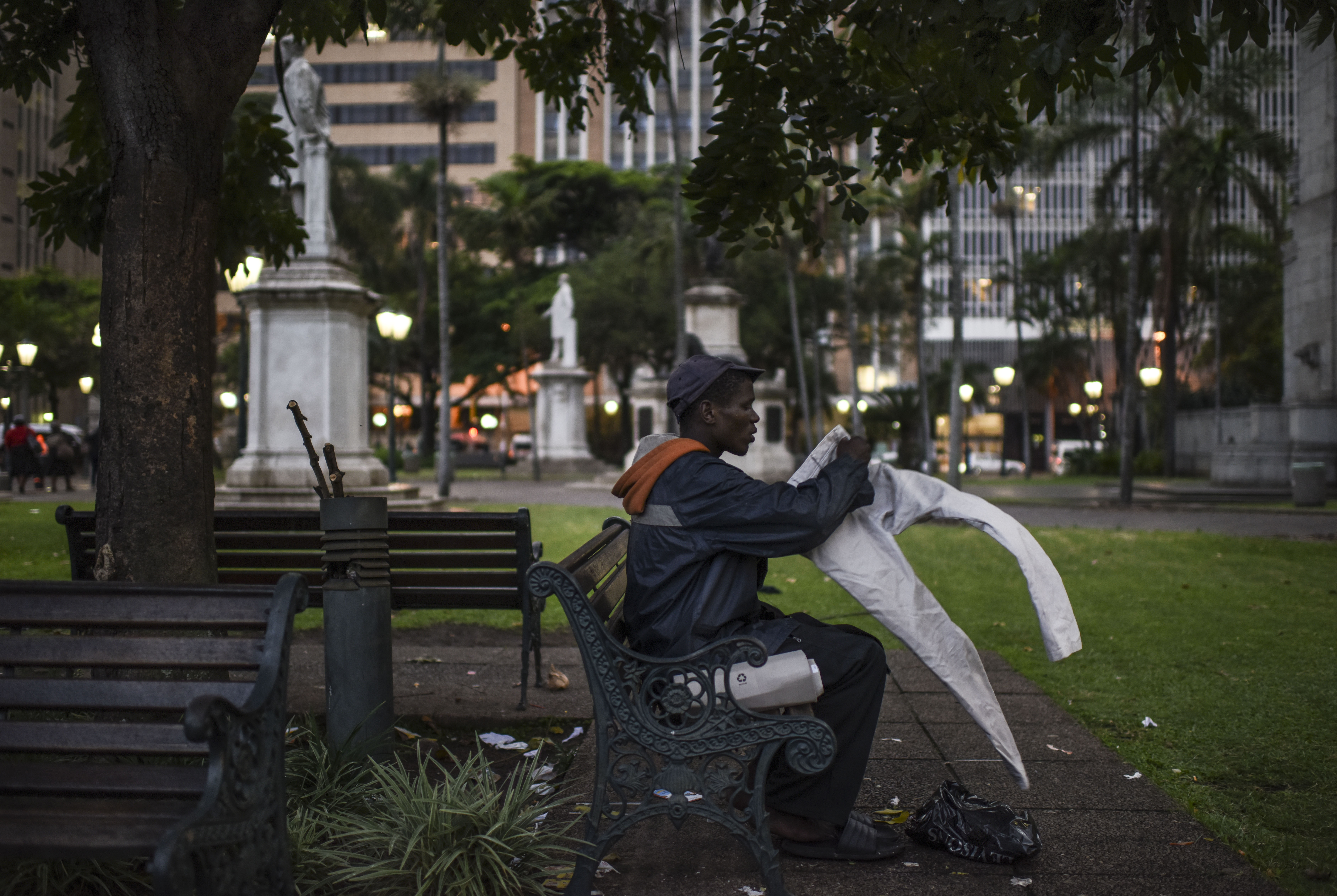 [Near City Hall is the Cenotaph garden, which is shared by street people, office workers and councillors (Paul Botes)]

Mitchell worries about the future of his pavement ministry.

“There was one guy who I was training, but he has children and a wife so he has had to become a chef instead. There is another youngster, but he is doing a course for four years. His father is opposed to him taking up the full-time ministry. His mother wants him to do it. We’ll see.

“God rose me up to do this job himself. Maybe he will do the same, after I am dead and gone, with somebody else.”

Mitchell’s belief is far from mainstream. He preaches two gospels, of the circumcised and the uncircumcised, drawn from Galatians.

“It’s deep stuff, man. Most people don’t get it. It’s way too deep, too serious. I understand. When you tell people everything they have believed all their lives is wrong, they are always going to think you are mad.”

Mitchell gathers his backpack and heads off. We will have to come back if we are to see him in action.

Two days later, there’s a fine but incessant rain pouring down outside the City Hall. Passers-by are huddled over, trying to get to their destinations.

Mitchell, undeterred, launches into a sermon. Bible in hand — he reads for about 15 minutes to prepare for each sermon — Mitchell is half contortionist, half communicator of fire and brimstone as he exhorts them to repent and seek the way of the circumcised.

As he gains momentum, the ferocity of his sermon intensifies. He shakes his head from side to side, punches his Bible with a stiff finger, swings his body in an arc as he hammers home his point.

A walking zombie dressed in rags with a shopping trolley filled with other people’s discards shuffles past Mitchell, not even sparing him — or his exhortation to repent — a glance.

Mitchell scuttles, crablike, along the line of benches, oblivious of the rain, getting more and more wound up as he goes. His eyes are shining, there’s spittle flying.

As he makes his way, two young hustlers with a mobile amplifier trundle past him, blasting out the Mormon Tabernacle Choir’s rendition of All Is Well With My Soul, as they try to move the pile of bootlegged CDs they have with them.

Mitchell turns up the volume, quite happy to compete with the Tabernacle Choir as he enters the final part of his sermon.

He calls on those hurrying past him to repent, to see the real way, to leave the church and seek God in the street.

Then he’s finished. Clearly spent, Mitchell picks up the flip-flops he has lost during the sermon, puts them on his feet and heads for the public toilet on the other side of the Cenotaph.