With a tax revenue shortfall of almost R50-billion, and more money needed for, among other things, higher education, the inevitable finally happened — the government increased value-added tax (VAT).

The increase from 14% to 15% has been met with mixed reactions. The contribution it will make to stabilising government finances has been welcomed but the effect it could have on lower-income earners, as well as its wider effect on economic growth, has been criticised. It also comes with other tax measures that will lighten consumers’ pockets.

In total, an additional R36-billion is being raised by tax adjustments for the 2018-2019 year, largely through the VAT increase and by limiting the adjustments made to individual tax brackets to account for inflation, or the so-called bracket creep. 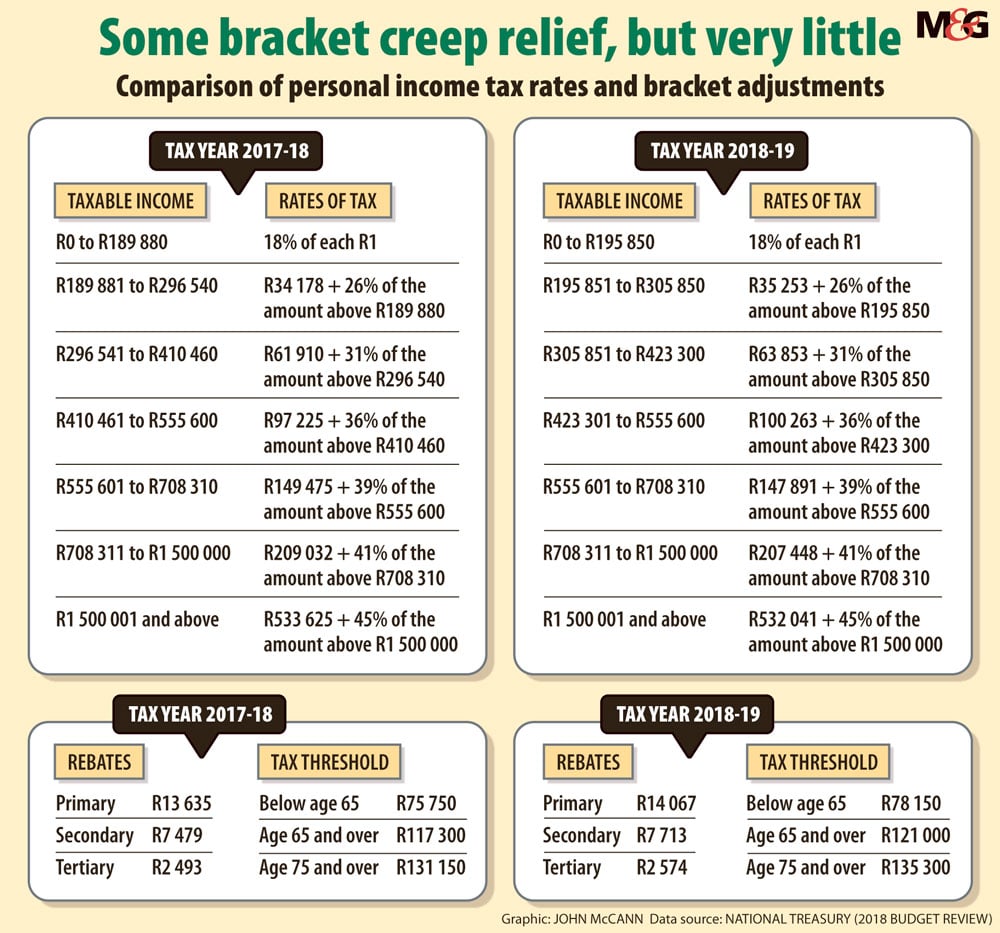 Other tax increases will also boost the state’s coffers, including increases to the fuel levy by 8c a litre to 30c a litre increases in ad valorem excise duties, including those on luxury goods, and the introduction of the health promotion levy — a tax on sugary beverages.

In the medium-term budget policy statement, a tax shortfall of about R50.8-billion was expected but this has improved marginally, with the shortfall expected to be about R48.2-billion.

The state has been flirting with the need to increase VAT for several years. It has avoided it until now because of intense political opposition and because a VAT increase is seen as regressive.

Finance Minister Malusi Gigaba defended the move, saying 80% of the increase will affect higher income earners rather than the poor. The wealthiest 30% of individuals contribute to 85% of VAT intake, according to the treasury.

Along with above inflation increases in social grants, the continued zero rating on basic foodstuffs and the introduction of free higher education, “the children of the poor and the poor themselves are … taken care of”, Gigaba said.

But the treasury decided that additional personal income tax rate increases would have greater negative consequences for growth and investment than a VAT increase. In addition, the shortfalls in collection last year suggested “further increases might not yield the revenue required to stabilise the public finances”.

“They have actually had no choice,” said Kyle Mandy, a partner at advisory firm PwC. “There was no space left for increases [on personal income tax].”

The declines in personal income tax collection suggested that past increases have in fact backfired, he added.

Although not increasing tax is ideal for economic growth, increasing the VAT rate is the “lesser of all the evils”, Mandy said.

South Africa has one of the lowest VAT rates compared with peer countries such as Zimbabwe, Namibia, Mexico, India and Argentina.

In an effort to protect the progressive nature of the tax system, the treasury increased the ad valorem excise duties on luxury items, such as cosmetics, electronics and golf balls. Other measures that will affect the wealthy include an increase  in estate duty from 20% to 25% for  estates worth R30-million and more.

But organised labour has criticised some of these tax measures. Trade union federation Cosatu said the VAT hikes and below inflation adjustments for inflation will hurt workers. The state avoided increasing taxes on the rich, on companies or significantly increasing luxury goods and imports taxes, the federation said.

Gilad Isaacs, director of the corporate strategy and industrial development research unit at the University of the Witwatersrand, said the VAT hike will hurt the poor and, although the tax system is progressive, it is not progressive enough.

According to Isaacs, taxes on goods — namely VAT and excise duty — hit the poor hardest, with the lowest earning 10% of consumers spending 13.8% of their disposable income on these taxes compared to 12.6% for the highest earning 10%.

Alternatives should have been considered, including a wealth tax, with international comparisons suggesting this could have netted between R22-billion and R154-billion.

The erosion of the tax base because of illicit flows and the ability of the South African Revenue Service (Sars) to collect revenue because of state capture are also major issues, Isaacs said.

Cosatu called for a change to the Sars leadership.

The treasury is aware of the threat that perceptions of corruption have on tax morality.

“The lack of an effective government response to allegations of corruption and poor governance has undermined the social contract between taxpayers and the state,” the budget review noted.

Besides the establishment of an inquiry into the functioning and governance of Sars, steps are being taken to improve its governance and accountability, and to increase the operational independence of the tax ombud.

But Gigaba did say he and Sars commissioner Tom Moyane are in discussions about Moyane’s second- in-command, Jonas Makwakwa. A report by the Financial Intelligence Centre implicated Makwakwa in suspicious transactions.

“At the right moment, both of us are going to make an announcement with regard to how we handle that issue,” he told journalists. “We certainly have to discuss it because the manner in which we handle it must be sensitive not only to public perception but [also] to the integrity of the institution.”