Sandile Msibi – the Free State official who allegedly took bribes and plundered the provincial police, roads and transport department he headed – left a handsome fortune when he died in December.

Msibi was a close ally of Free State premier and ANC secretary-general Ace Magashule and collected property for which he paid almost R25-million.

The shopping spree started in November 2011, after Msibi was appointed head of the roads department, which has an annual budget of a billion rands. He bought a R1.7-million farm four days after his appointment.

The Msibi trust was registered in 2010. By 2012 it owned properties bought at about R2.7-million.

But it was in 2015 that his portfolio really took off. In that year alone, he bought four properties worth a total of R13-million. His properties in the trust are worth nearly R25-million.

The property searches revealed that most of the properties are fully paid up and not encumbered by bonds. 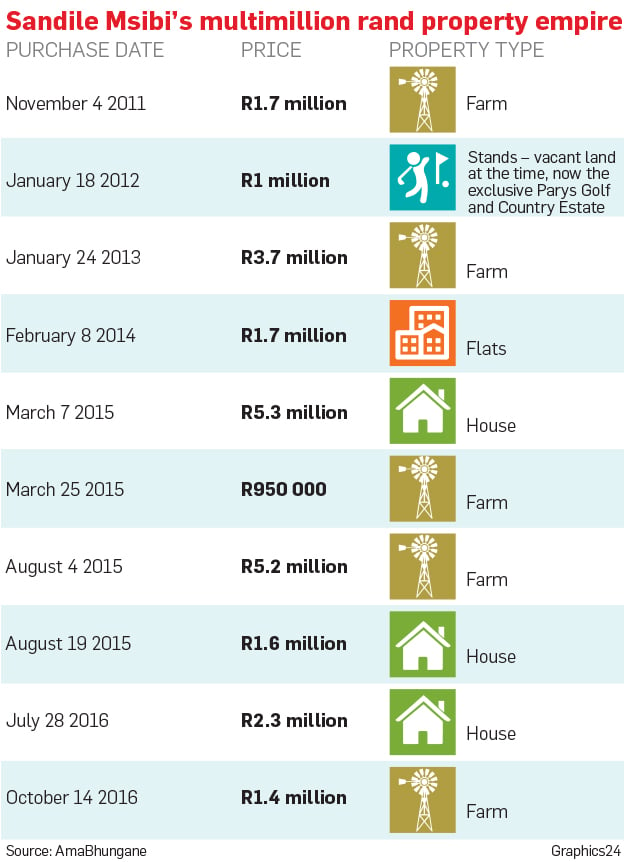 A series of investigative reports by amaBhungane about Msibi have turned a harsh spotlight on his alleged misuse of state resources while he headed the department.

Msibi was sent questions to explain his source of wealth and other allegations in October last year. He confirmed receipt but he never responded.

In March last year amaBhungane reported that his department had irregularly awarded a sweeping, open ended tender to TAD Consultancy and Services, a company headed by Deena Pillay, Magashule’s secretary, while he was the provincial sports MEC in the mid-1990s.

Critics suggested the “Fusion Centre” contract was emblematic of an informal but entrenched network of businessmen and government officials aligned with Magashule who seemed to survive controversy and prosper under his administration.

Msibi claimed there was nothing untoward about the contract, the full value of which has remained a closely guarded secret.

Two months later amaBhungane reported that Msibi transferred large numbers of ICT staff from his department, allegedly in breach of labour law, and replaced them with TAD and another company BBTech.

In August last year Msibi was embroiled in a conflict of interest scandal when amaBhungane exposed that he had channelled R7-million in legal business for his department between 2013 and 2016 to his personal attorneys, as well as lucrative contracts totalling R1-million in a single year to a firm controlled by a “close friend”.

Msibi denied any personal relationship with the attorney his department hired, mostly for labour-related issues. But amaBhungane saw personal correspondence that appeared to contradict this.

There have been allegations that he used the attorneys for “witch-hunts disguised as disciplinary hearings” to purge staff who questioned or resisted him or his allies.

Internal departmental sources said Msibi was assisted by his chief director of corporate services Norman Selai, another controversial figure said to be part of Magashule’s inner circle. Selai was embroiled in a scandal linked to the purchase of overpriced diaries when he was the municipal manager of the Ngwathe municipality in Parys.

He was suspended and later resigned after a report by the auditor-general, tabled in the Ngwathe council in 2011, found financial irregularities, including assets worth R55-million that could not be accounted for.

Selai was appointed to Msibi’s department in 2012, despite an outcry from opposition parties.

AmaBhungane has established that Selai was appointed as one of the trustees of Msibi’s family trust. Selai did not respond to emailed questions from amaBhungane.

Last year amaBhungane reported that the DA in the Free State had accused Msibi of using departmental letter-headed paper to solicit contributions from businesspeople for the ANC.

Documents amaBhungane obtained show that in 2016 the Hawks opened an inquiry into Msibi. Last year the Hawks denied that an investigation had been launched and refused to confirm the inquiry.

But a progress report to the head of the Free State Hawks on March 3 2016 reveals that the inquiry was registered under case number 04/02/2016 “as per commercial crime inquiry”; that a request for information on “known people in the Msibi Family Trust was submitted and the report is awaited”; and that Msibi’s family was being profiled.

The document refers to a bribe allegedly being solicited in Three Rivers in August 2013 and asks for information on “the mistress”, who is named, saying “cash was deposited to her frequently”.

AmaBhungane was unable to gather more information on this.

Msibi and Magashule were very close, although Tiisetso Makhele, the premier’s spokesperson, said in November 2016 that their relationship was “cordial and professional” and not personal.

Magashule appointed Msibi after the latter was forced out as municipal manager of the Mangaung council amid claims of corruption and maladministration.

City Press reported that Magashule made the bizarre claim at Msibi’s funeral in December that his former head of department had been “ruthlessly poisoned by heartless people” and that before his death, he (Magashule) had asked then president Jacob Zuma to send him to Russia for medical treatment.

“We said president [Zuma], we have a friend; that this man has been poisoned. Can we please take him to Russia? There are others who have gone to Russia and come back alive,” Magashule said.

Magashule described Msibi as “the best [head of department] in the history of the administration” and “a true revolutionary who was both loved and hated for championing radical economic transformation”.

He blamed white monopoly capital for hunting down Msibi and his associates.

“He was brave to stand against white supremacy and purged most of the white staff from the old administration who had overstayed their welcome,” Magashule told mourners.

“He diverted tenders away from white-owned firms to benefit blacks and fired workers he deemed lazy or entitled.”

Africa.com: Live from the World Economic Forum in Davos