Memories of mama keep the past alive

It’s been years since Happiness Lubazana waited at a bus stop in Mount Frere in the Eastern Cape. That day, she was burdened by a ticket to the big city, despairing she may not find her a place in the strangeness of Johannesburg.

But whereas Madikizela-Mandela, who was a daughter of teachers and a former head girl, would grow to be a giant of history in the city, Lubazana’s first name would be a cruel taunt in the place that had once attracted her hero. Lubazana couldn’t find a job, love or purpose.

All she had was a 3x2m shack in a dense block in Winnie Mandela Park on the outskirts of Tembisa, Ekurhuleni. 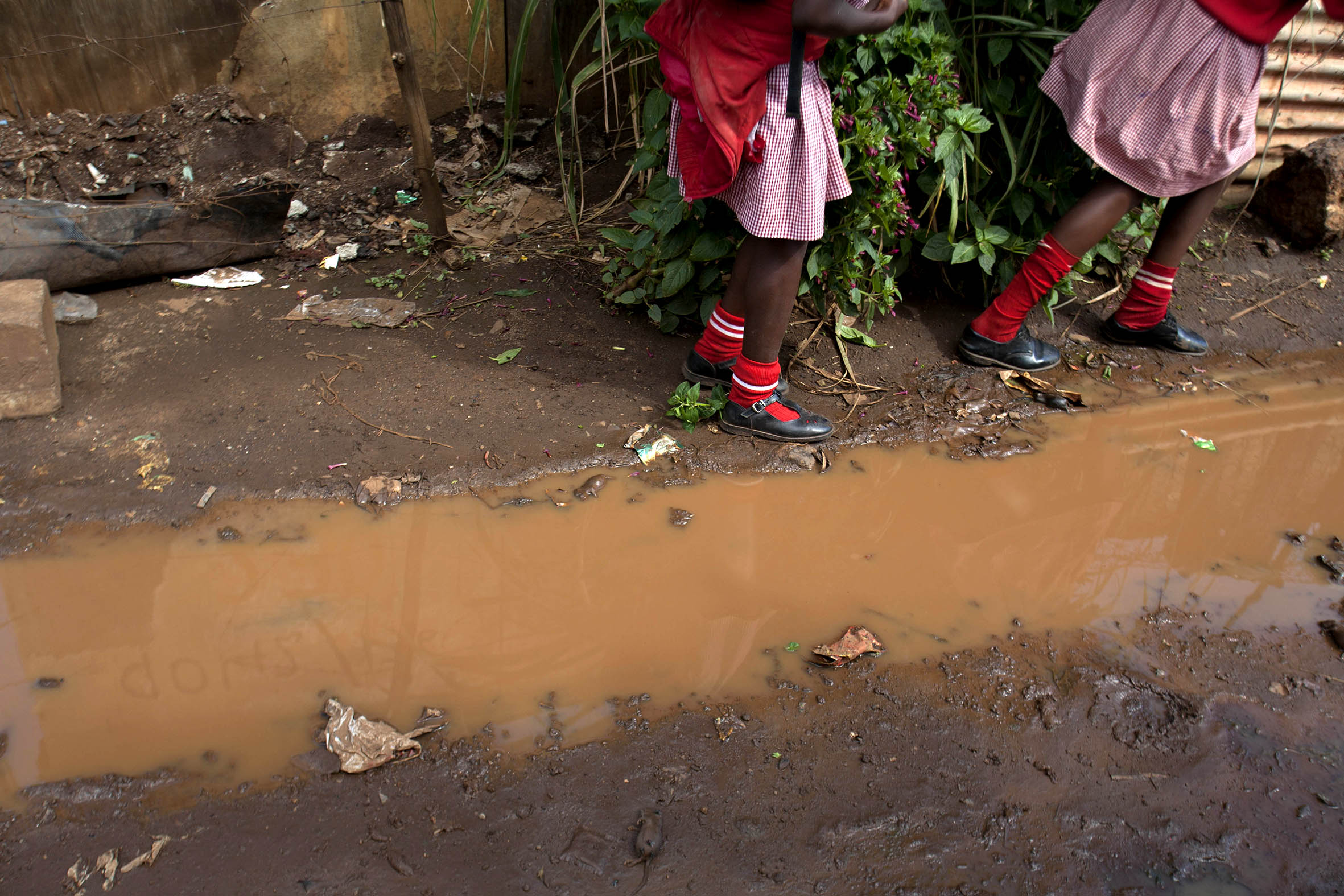 [While the struggle hero is eulogised, economic liberation eludes residents of the Winnie Mandela informal settlement in Tembisa. (Oupa Nkosi/M&G)]

Established in the name of the Mother of the Nation, the residents of this economic battlefield had approached Madikizela-Mandela in the early 1990s for help to formalise ground they had occupied. She had kept her promise by 1994, but they didn’t expect poverty and political neglect would dip them like muddy rags into a second decade.

Yet Madikizela-Mandela — like the meaning of her name, Nomzamo, “she who tries” — stayed true. All that mattered when it came to “mama”, was that she had not let the people of her park down.

Lubazana remembered what “a good person” she was and how “she was always fighting, so we had to admire her”. Standing in the doorway of her shanty, dark inside and cold, she was philosophical about a woman who had suffered just like her.

“She got whatever she wanted through fighting,” said Lubazana. “She was a dangerous somebody. Nobody could stand in front of her.”

It’s words like these that bolstered Madikizela-Mandela even into her final years. She herself said: “I have never thought of anything. My people always tell me what to do.”

A rarity of a militant and a true revolutionary in the ANC’s conservative patriarchal structures, Madikizela-Mandela remains in liberation history the most brave, and the most “dangerous”. She’d eclipse even Chris Hani and Joe Slovo, whose names once sent a sweat of terror through racist Christian nationalists.

It was Madikizela-Mandela who was the uber-threat to white South Africa. Even malignant security agents such as Theuns “Rooi Rus” Swanepoel, who specialised in torturing black women, would never come to terms with her unflinching power.

Yet Shanti Naidoo, one of her closest comrades through the 1950s and 1960s, when both were tormented and tortured by the regime, remembered a quieter, happier Winnie.

Now 83 and still a leading member of a family of five generations of activists, Shanti was affectionate about the fragrant, friendly young mother of two daughters who spent much of her time in the Naidoos’ large old home near End Street in Doornfontein, Johannesburg.

Shanti’s brother Indres Naidoo would be incarcerated for 10 years on Robben Island. Shanti would herself be damaged by violent, hallucinatory interrogations over more than 300 days before being banned. But whereas Madikizela-Mandela’s family were a day’s drive away in Bizana, Eastern Cape, Indres and Shanti had the intimacy of a family’s embrace. And so Madikizela-Mandela was welcomed there too, in a home where the scent of the tamarind and garlic of a mother’s famous crab curry lingered in its corners.

“That activist spirit … it’s something in our blood,” said Shanti, “and so Winnie and the girls just belonged there. They were part of our family, in a warm and open house.”

Under surveillance, and visited by Nelson Mandela, Walter Sisulu and many other tenacious young leaders of the underground, the Naidoo home was a loving base for Madikizela-Mandela and her children, Zindzi and Zenani, who attended the “coloured” school downtown before being moved to the security of Waterford Kamhlaba in Swaziland.

Ahmed Iqbal Cajee’s family also developed a bond with “Aunty Winnie” within the apartheid city limits of the 1970s. The Cajee family had moved into a flat in Johannesburg’s busy Market Street, which had previously been rented by Ahmed Kathrada, and Ahmed Cajee’s childhood unfolded in front of a young woman then persecuted even by her own political community.

“It was a time when it wasn’t yet fashionable to associate with her … when even so-called struggle stalwarts crossed the street when they saw her coming. But she was very close to my parents.”

Madikizela-Mandela was employed by Cajee’s father, a cobbler, for a short while before the security apparatus made that impossible too, and Cajee, an impressionable 10-year-old, remembered a woman who urged those in her ambit to take charge.

“I remember one occasion when, in response to a family crisis, one of my aunts convinced my mum that, for a small fee, she could get a maulana to offer prayers to make the crisis go away. When Winnie found out, she was very angry and asked my mum: ‘Ayesha, what’s wrong with you? What’s wrong with your prayers? Why do you need someone else to pray for you?’”

Madikizela-Mandela would later attend both of Cajee’s parents’ funerals, and was “always available and remained in telephone contact”.

A decade ago, seething and unsmiling as she tramped for hours, then days, through sites of xenophobic bloodshed across Johannesburg and Ekurhuleni, Madikizela-Mandela would berate calamitous ANC rule. It was early 2008, and Thabo Mbeki, a sometime nemesis, was hurtling towards his political doom after Jacob Zuma had assumed control of the party at the Polokwane elective conference. She all but blamed him. Later, she would brazenly lay siege to the “Madiba magic” trope that swirled around Nelson Mandela.

Madikizela-Mandela would never quite come undone, even after her most harrowing post-apartheid experience: the cross-questioning by the Truth and Reconciliation Commission’s chief legal adviser, Hanif Vally, in Mayfair, Johannesburg, in 1997.

Yet it was Vally who reminded the packed benches that Madikizela-Mandela had used her maiden speech in our first democratic Parliament in 1994 to say that “her greatest regret” was that Stompie Seipei had been “taken from her house and killed”. Madikizela-Mandela never veered from her position that she regretted that she “had failed him”.

There remains much South Africans do not know.

Film super-producer Anant Singh said she was “very down to earth”, that she enjoyed “normal things like gardening” and had “a great sense of humour”. Singh was especially touched by the “chemistry” Madikizela-Mandela had with his grandchildren and great-grandchildren, and that reach through the generations was most poignantly reflected in her revealing, to British writers Nadira and VS Naipaul, how, “when I am alone, I cannot help but think of the past. The past is still alive in here. In my head.”

For many, Madikizela-Mandela’s death this week was personal, and emotional.

Afzal Moolla, the son of Mosie Moolla, who was a close comrade and friend of Mandela, had pictures of her drawn in his imagination particularly by his mother, Zubeida Moolla, who knew Madikizela-Mandela when she was a social worker and his mother was a nurse in the 1950s.

“They got to know each other better when Nelson Mandela and my father were among the 156 accused in the Treason Trial.”

So moved was Afzal this week that he wrote a poetic tribute to “Mama Winnie”, assured that: “We console each other as the truth cuts deep/ her life one of loss and of unimaginable pain/ as we call out our eternal refrain/ Hamba kahle …/ We will not give up your fight!”

Snuki Zikalala, president of the ANC Veterans League, issued an affecting consideration of a woman with an urgent and unrelenting political mandate, with whom he shared the vicious trenches. No matter how their later experiences within a more mainstream society may have altered perceptions, the pulse of Madikizela-Mandela’s revolt never slowed.

Zikalala “remembered vividly when I met her in 1966 in downtown Johannesburg”.

“We spoke in hushed tones on how evil and atrocious the apartheid system was. It was only when she invited me to her home in Orlando West in Soweto that she spoke freely and we started planning on how we could mobilise and organise the youth to become active participants in the struggle against apartheid.”

Most revealing, said Zikalala, is that “Winnie never revealed her identity then. She was a leader in her own right. She was not in the struggle because she was married to Nelson Mandela but was a committed and dedicated member of the ANC.”

It’s a story that, like its subject, has no end.