Cyberbullies a threat to new media

As corporates — and governments — in this new era seek ownership and/or control of new media, it is essential in the name of democracy that the future of journalism must be led by skilled journalists who usually prefer independence to riches.

What their role can be is still unclear, however, for the digital revolution is moving in several directions at speed. With the arrival of Facebook (2004), YouTube (2005), Twitter (2006) and the rest, news on radio, TV and in the press suddenly encountered a new medium that linked the cellphone to the web and “published” news and information in a newly organised fashion.

Almost overnight a flood of dramatic news-event cellphone photos and videos were splashed across the world.

The Independent in London, commenting a decade ago when cell-phoned, private-sourced news pictures and news flashes were breaking out all around the world, said: “These are incidents with enormous implications for the conduct of modern life. It is growing ever harder to cover up public acts, either by ‘spinning’ them or pretending they never happened, for the simple reason that at any moment those acts might be recorded and disseminated with little more required than a USB plug-in and a few clicks of a camera.”

Now, with 4G and 5G connectivity available on the go you don’t need to plug in any more. The speed of change in human communications is so fast right now the next step is almost unimaginable. Yet, for journalists and newspaper readers today, it is no longer the technical developments but their consequences that are relevant.

In practice, the reshaped media may be made up of several different small and big moves. The answer may come from Tokyo, where one of the world’s biggest-circulation newspapers is produced in a well-educated, inventive society; or from Silicon Valley, where “digital” is mother’s milk; or from Shanghai, or wherever commercial innovation is currently king.

We can only hope this is not so, for news sources controlled by website billionaires, or “big business”, or vague nongovernmental organisations, or unaccountable foreign funding, are likely to be bad news for readers globally.

Fortunately there are innovators in the daily, accountable and independent free press who are also trying to adapt to the coming change. The press is simply trying to find ways to carry its current readers into new formats of digitally imaged words and pictures and its growing collections of sound-video.

To ensure a future balance of independently reported news on a grand and universal scale, an economically viable mix of adverts and independent news is desperately required on whatever new medium there may be — online, or something else. 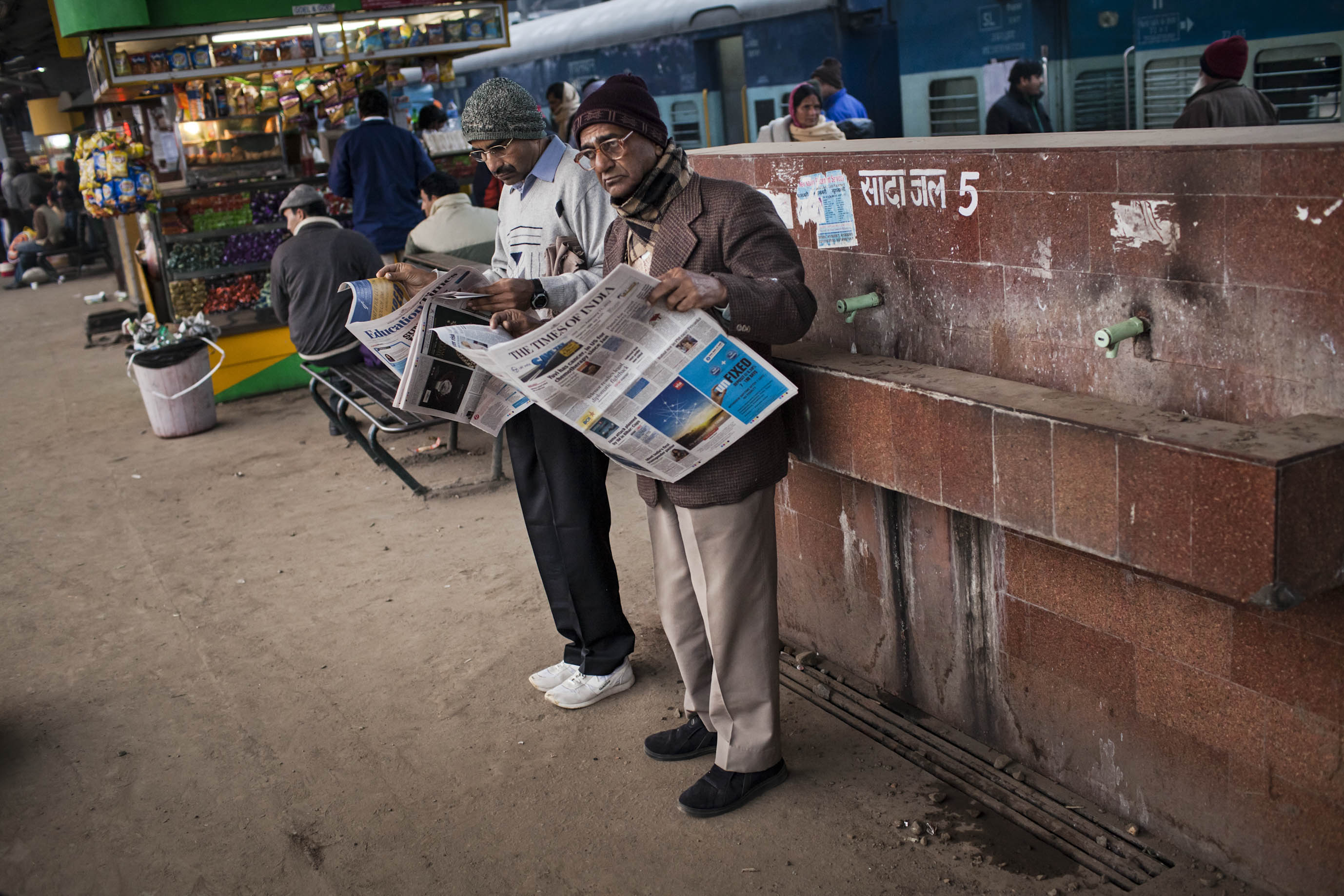 Old news: Media houses around the world are having to find ways of successfully moving their current readers into new formats of digitally imaged words and pictures. Photo: Daniel Berehulak/Getty Images

Yet, even as the movement grows, giants in the digital world, such as Google, are already being accused of trying to take over, rather than assist trusted news organisations and smaller news sources. Local papers and the community press believe they will be around for a long time — if they can adapt to changing “readership patterns”.

The Knight Ridder newspaper group and, since the sale in 2006 of its publications to The McClatchy Company, the Knight Foundation has spent millions on training cadets in new ways — including video-reporting — to meet what they see as the future needs
of their local community readerships. Video-reporting is already making great leaps and bounds in the long-established TV news services.

CNN and Al Jazeera have, since 2016, advanced world television coverage dramatically by devoting 24-hour coverage, to the exclusion of almost everything else, when major world stories break. In the past this happened only selectively (such as the 2003 US coverage of the action of US forces in Iraq), when news analysis was poor.

Today, video wrap-ups and running video analyses of an issue often go far beyond what even the best newspaper or online print report can achieve.

Circa News, a mobile app (a website portal was added later), developed a “new way” that has been trumpeted by journalists and media industry-watchers as a glimpse into what the future of mobile media publishing might look like. When it was launched, Circa’s main strategy was to take complex stories published by other organisations and break them down into bite-sized news updates (something they called “atomisation”) for consumption on mobile phones.

This “new way” also envisages updating these “news stories” with bullet-like “points”, linked to previously circulated items that result in “running stories” for those news items an app subscriber chooses to follow. After a hiatus in operations during mid-2015, following some difficulties finding a new backer, Circa relaunched its initial product offering while adding short and long video presentations optimised for social media usage.

The New York Times has introduced NYTNow (originally a paid-service based on Circa News that is now free) and Middle East-based Al Jazeera’s AJPlus has tried the same experiment. The Sydney Morning Herald decided early and all by itself to change as quickly as possible into an online “newspaper”. It is already nearly there, but some of its journalists have complained that the resulting reductions in editorial staff are lowering standards and creating instability.

The Guardian moved assets to the US in its search for a suitable global base. It also has links with the transforming Sydney Morning Herald.

The Washington Post, bought a few years ago by Jeff Bizos, founder of Amazon, has spent hundreds of millions of his dollars in the search of a news system that would use every form of media and become an international voice, communicating with the planet from the US capital. Bizos — having already created arguably the world’s biggest e-commerce company — may still be searching for the newspaper’s best answer.

Asking consumers to pay for content isn’t a model he is sold on. “These things can change, but I don’t see evidence yet that consumers are amenable to those kinds of micro-payments,” Bizos once said. He wanted to move The Washington Post from “making a relatively large amount of money per reader, having a relatively small number of readers” to a model “where we make a very small amount of money per reader on a much, much larger number of readers”.

The Washington Post has already experimented with a number of new advertising products that fit Bizos’s philosophy. There are countless other newspapers around the world planning their moves into the future, but all may have to rethink their current strategy because Google seemed to be pointing to the next big move: amalgamation of news providers.

After abandoning Circa News, Google received sharp criticism from the European Union and from newspapers in Germany and Spain for taking shortcuts and abusing its powers on the web. Google has made some public apologies, but re-launched its rebuffed plans.

Google relaunched its direct entry into journalism in 2015 by announcing “a new partnership with several publishers”.

The company sought to create a €150-million fund “to support innovation in journalism and product development in Europe”.

Google spent $5-million on an experiment with Knight Newspapers in the US and later European newspapers including Financial Times, The Guardian, El País, La Stampa and Die Zeit.

Google carefully explained that the money would not be spent at those titles. Rather, Google would advise on the spending of the fund to help news organisations “demonstrate new thinking in digital journalism”. Google said it intended to invest in training and research for journalists.

It would train newsrooms in digital skills. It would “invest in training partnerships, as well as funding research into digital journalism”.

I cannot see such beneficence happening for independent news sources elsewhere. Not in Africa, where signs of Chinese funding of media are already evident, or South America, or China, or Russia.

In great, big, democratic India, now under Prime Minister Narendra Modi’s “Digital India” initiative, plans are being rolled out for expenditure of the equivalent of $71-billion on creating online communications; designed to change the entire canvas of the country.

But the news media will be a mere leaf trying to float on the national digital tide.

READ: Why Facebook is the reason fake news is here to stay

The backlash against the seemingly benign big boys on the democratic internet is also growing. There are two major themes of criticism growing louder and louder. The first criticism was voiced publicly again recently in a talk at Harvard’s Shorenstein Centre, where Jeffrey Rosen argued that “Twitter, Facebook and Google are facing increased pressure to moderate content in a way that is inconsistent with First Amendment protections — in the name of promoting civility rather than democracy”.

This threat of insidious, self-inflicted self-monitoring is scary. It could become a greater threat, in the long term, than any cyber-damage by Islamic State or Russia’s Putin regime, or any other enemy of democracy. But the second threat — the sudden growth of a dominant corporate empire taking control of the media and the web — is even worse.

This is an edited extract from Harvey Tyson’s new book, End of the Deadline (Print Matters Heritage). Tyson was a news journalist for 44 years and editor of The Star for 16