Mine shakes homes and dreams

Three years ago William was at his school in the Limpopo village of Sekhiming when its walls and the ground started shaking. He says the cause was a tremor from the blasting at the nearby Mogalakwena platinum mine. Pupils ran out of their classrooms into the schoolyard. He found himself in the dust with a searing pain in his left leg. A rock, thrown into the air by the blasting, had smashed his leg. Other rocks shattered windows at the school. William was taken by ambulance to a clinic run by the mine. 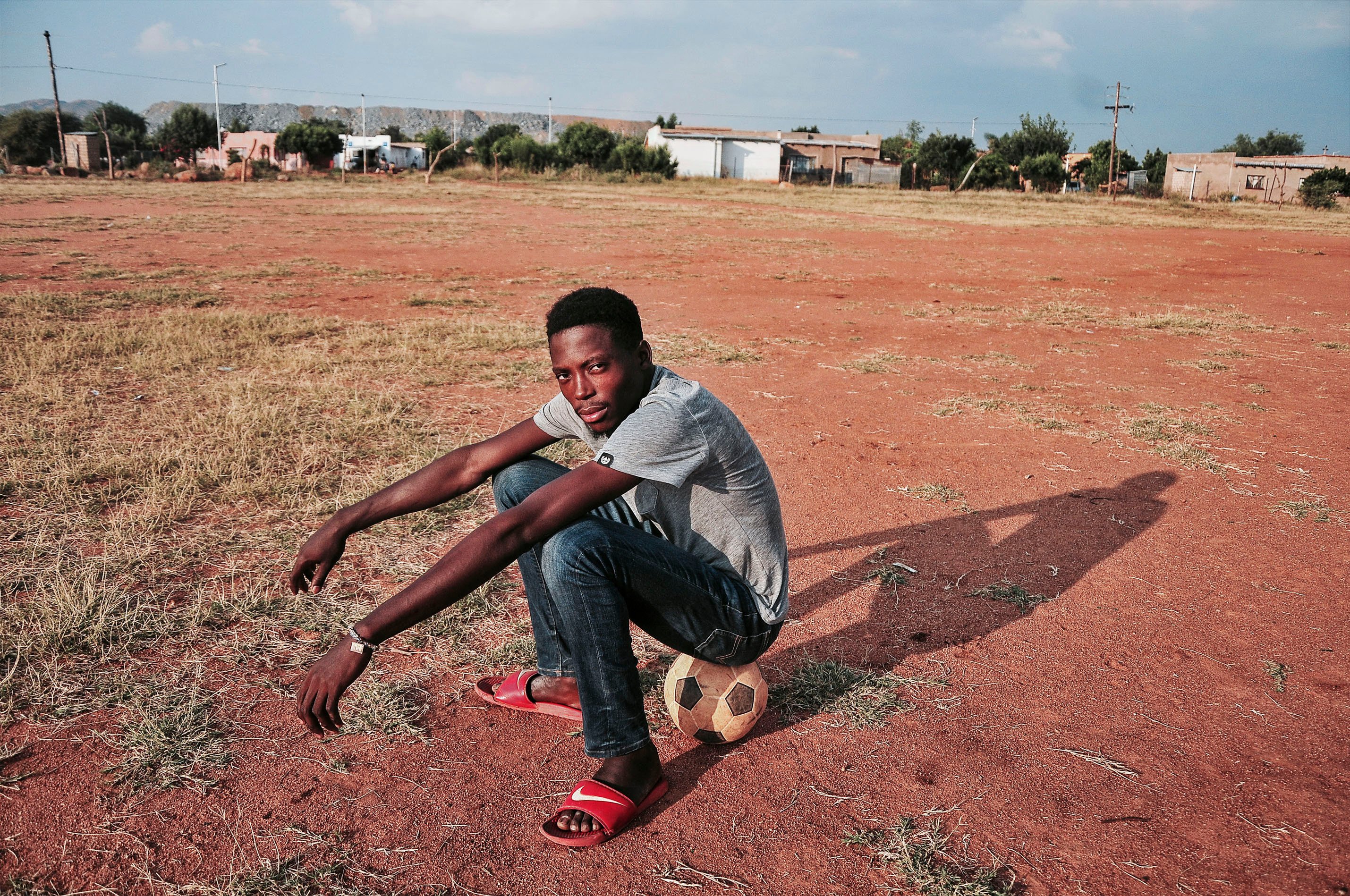 At 18, he was set to attend trials with a Premier Soccer League club with two other youngsters from the area. But, despite medical care, he is now almost paralysed, with constant pain in his leg and debilitating depression. His football dream has gone.

“I have given up on life now because of this thing,” he says.

A psychologist’s assessment report says he will need long-term psychotherapy and antidepressant treatment. The mine says he skipped follow-up sessions with a social worker and that his family has instead decided to sue the mine.

William says he dropped out of school because of the trauma from the incident and fear that he might suffer another injury because blasting at the mine continues. His mother’s worst fear is that his depression could lead to him taking his life.

Sekhiming is one of several villages bordering the mine in Mapela, some 30km northwest of Mokopane in Limpopo.

A recent citizen-led social audit by the nongovernmental organisation Action Aid, which included villages near the Mogalakwena mine, found that it failed to comply with regulations relating to health and safety. Although unemployment in the area was the concern people ranked as most pressing, air pollution came a strong second.

Mogalakwena Platinum, owned by Anglo American Platinum, started digging in 1993. It is the world’s biggest open-cast platinum mine, with pits as deep as 245m.

The mine’s expansion over the years has put it at loggerheads with its neighbours. Now, its grey mine dumps are within 1km of homes and they have swallowed the grazing lands and agricultural fields.

He says the residents have not been compensated for the loss of their lands and they are not being paid for damages caused to their homes by mining operations. The mine, however, says it has spent R16-million compensating people for the loss of agricultural land.

The residents of Sekhiming talk about the different but profound ways in which living so close to the mine affects them.

During an interview with Julia Nyatlo, at about 2pm on a weekday, the ground underneath her lounge started to shake. This lasted for almost a minute.

The walls of her three-bedroomed face brick house trembled and the windows vibrated. Furniture rattled eerily and even the couch jiggled from the tremor. It’s a frightening experience Nyatlo dismissed with a wry smile of someone who has got used to living in the face of daily danger.

“This is nothing,” says Nyatlo, pointing to the cracked window facing north.

She says that during blasting, glasses, cups and dishes drop to the floor and break. “Even the TV shakes.”

A while ago her kitchen cabinet crashed to the floor after having endured one tremor too many, almost landing on top of a child. The walls and floor are cracked in different places. The cracked windows are held together with tape.

Nyatlo says dust from the mine dumps covers everything — furniture, clothes and bedding.

“I used to reprimand my daughter, saying she doesn’t clean the house properly [when I still worked in Gauteng]. But when I came to live here permanently, I saw it for myself.”

Half a kilometre from Nyatlo’s home, the mine dumps dominate the view from Ramaela Maheso’s RDP house. 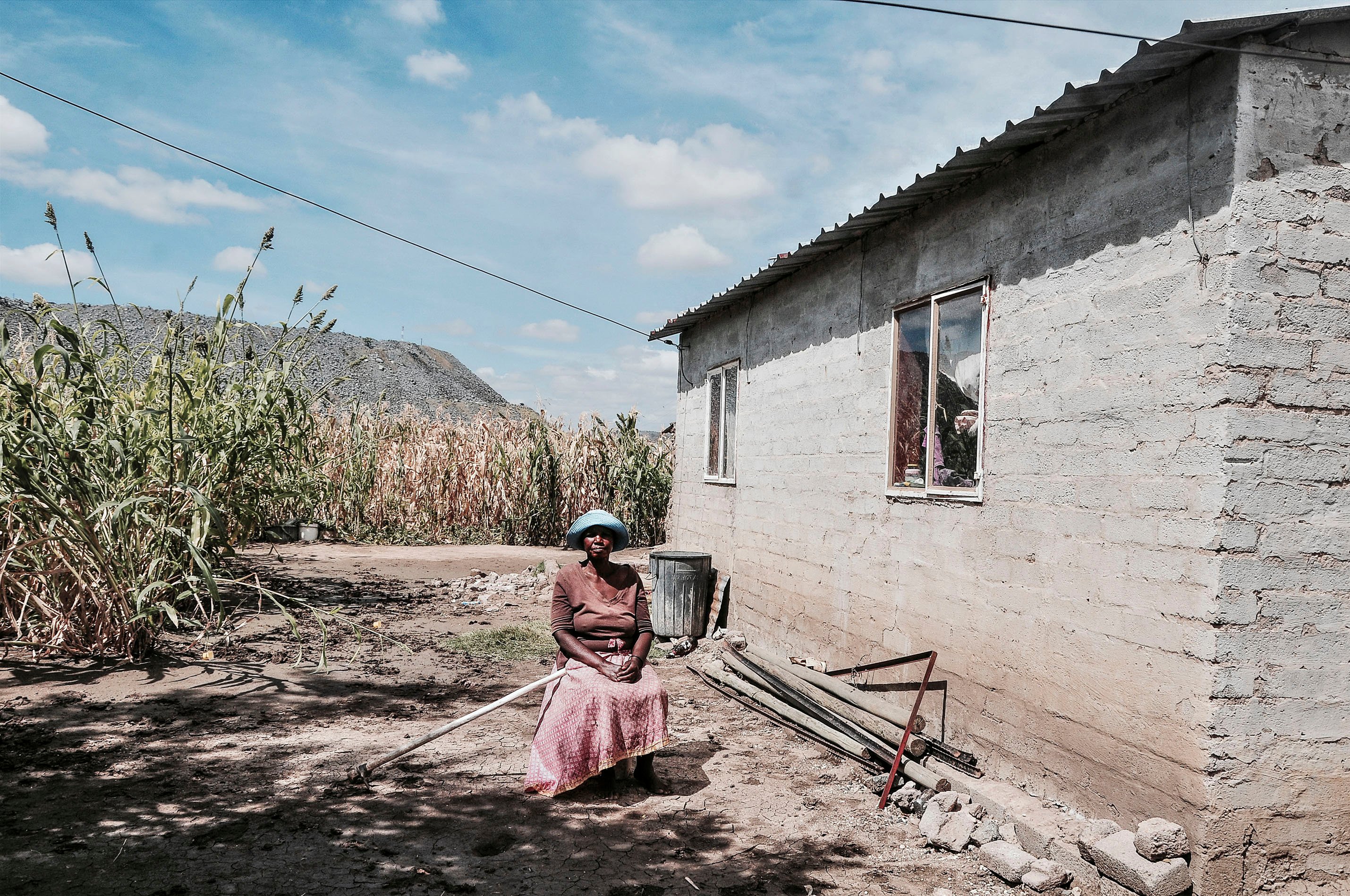 Mine dumps have smothered Ramaela Maheso’s fields of maize and other crops. (Lucas Ledwaba/Mukurukuru Media)

Her family’s fields lie underneath the dumps. These used to be fertile and the family grew maize, potatoes, beans, sugar cane, pumpkin, watermelon and other crops. Their food supply was secured; they had very little need for money. Their maize produce was more than enough to sustain them until another harvest the following year.

But since the mine took over the lands and turned them into hills of waste, she and her family are hungry. Without jobs, they now have to rely on state grants to make ends meet.

They saw the dumps edging closer to the village and their fields being buried underneath. But no one explained anything to them, Maheso says.

And when their fields had disappeared underneath the grey rocks and rubble, nobody paid them or gave them alternative land to continue their sustainable way of life.

“We just feel sad. But there is nothing we can do,” she says.

Her three children are unemployed and survive on piece jobs, but work is scarce in this rural area.

The house where she was born — across the road from her RDP home — collapsed from blasting at the mine in 2015. Anglo management allegedly promised to rebuild a new house for the family. Instead, they delivered zinc metal sheets that her brother used to build a shack where he now lives opposite the collapsed house.

“This dynamite [blasting] is a big problem for us. They don’t even let us know when they are going to blast. There is too much dust here even in the house. We are just coughing all the time,” says Maheso.

Dina Mashaba, a resident of Sekhiming and a member of the Women Affected by Mining United in Action group, says they set out to rebuild their house, but Anglo management intervened saying they would do it. Three years have passed and this has not happened.

The spokesperson for Anglo American Platinum, Jena Marais, says their investigations into potential effects of dust and fumes on community health “have revealed that there is no cause for concern”.

The mine has 18 dust buckets surrounding the mine and 14 inside its perimeter. These are run by an independent contractor who collects data on pollution.

“According to our records, there have been no dust exceedances against the National Dust Control Regulations for residential and nonresidential limits, since 2011,” says Marais.

The mine also monitors potential noise and gas pollution.

“Investigations showed that none of the damage reported was caused by mining activities.”

Instead, she says, the damage was “attributable to several factors including inadequate foundations, poor structural design, substandard construction standards and techniques, and natural ageing”.

The mine says it has also compensated more than 500 people in two villages, who lost farmland to the mine’s expansion, to the tune of R16-million.

In the case of William Sebelebele and his debilitating injury, Marais says the young man was taken to the mine’s clinic and was then referred to a social worker for a trauma debriefing. He was found to be well. He did not go to a follow-up appointment, she says.

“The family was once more approached and advised to revisit the clinic for further medical assessments, but they declined and unfortunately opted to pursue legal action,” says Marais. — Mukurukuru Media