Mswati wanted Trillian to turn his country into a tax haven

Businessperson and former government minister Tokyo Sexwale pulled strings to secure a multibillion-rand eSwatini deal for Trillian Capital, a company owned by people with close links to the Gupta family. The deal would have seen the firm help in the construction of Las Vegas-style hotels and a conference centre. It also had dreams of making the kingdom a tax haven.

Sexwale, who was non-executive chairperson of the controversial Gupta-linked firm at the time, brokered a meeting for its top executives with eSwatini monarch King Mswati III and then another one with the then finance minister, Martin Dlamini, in September 2016.

These two meetings were followed by several other high-level meetings with senior government leaders, including those of the eSwatini Central Bank. 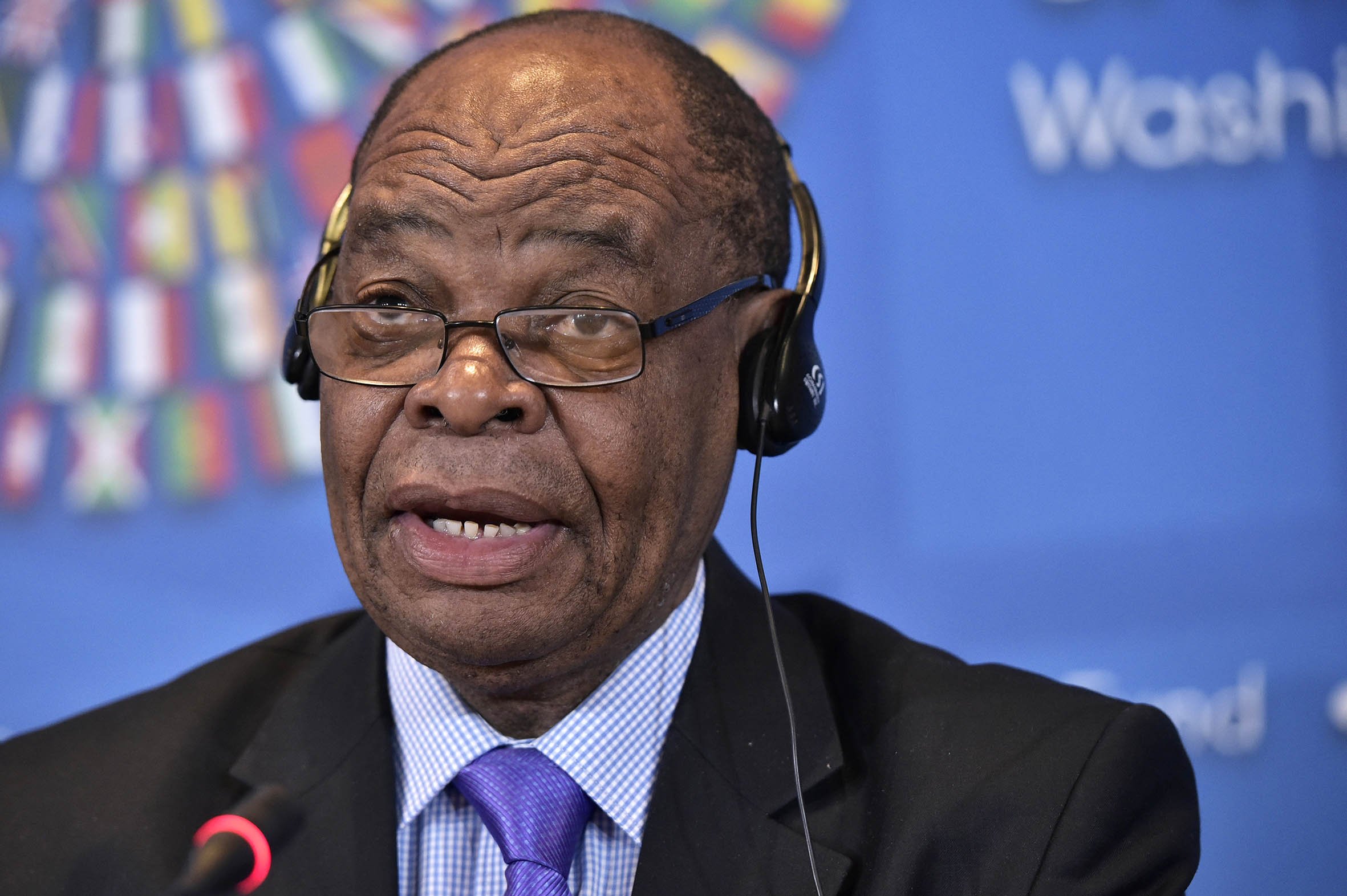 The meetings paved the way for Trillian to get the inside track, within weeks, on several projects the eSwatini government was undertaking and planning for the future.

These included construction of the multibillion-rand International Convention Centre (ICC), two five-star hotels in Ezulwini Valley, between Mbabane and Manzini, and an ambitious plan to position and market the country as a tax haven.

Trillian’s high-level planning document, seen by the Mail & Guardian, shows that the company was asked by eSwatini to arrange between R400-million and R700-million to complete the ICC, plus a further R2-billion for the construction of two Las Vegas-style five-star hotels — one adjacent to the ICC and another near Mbabane’s new international airport. According to the document, the main purpose of the ICC, which was funded initially by the government, was to host next year’s African Union summit. 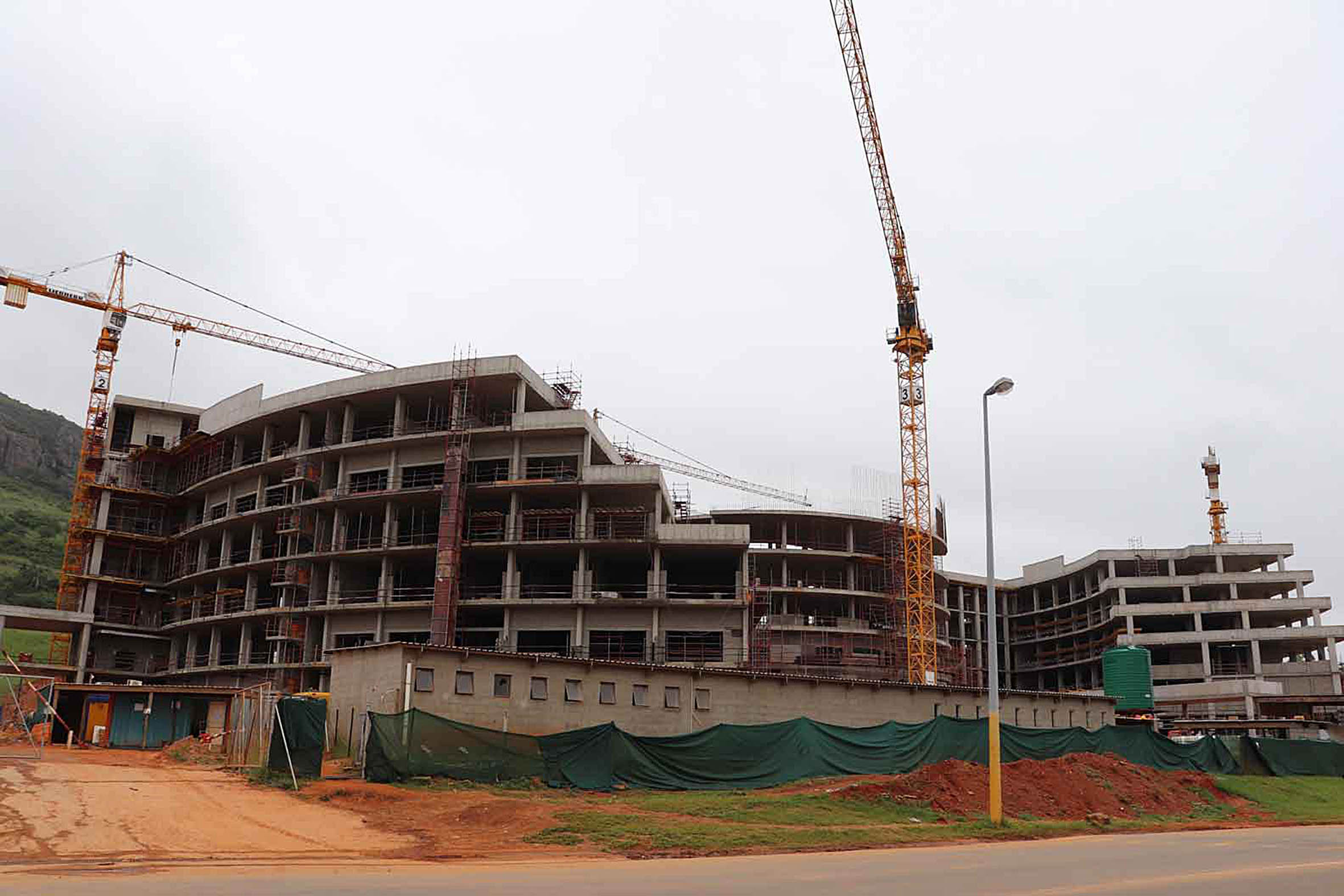 “A subsequent loan of US$80-million was obtained from Taiwan, but would only take construction to stage 70 percent complete. The client requires an additional R400m-R700m to complete the venue and requires support in obtaining the funds,” the document reads.

It is not clear what came of these ambitious plans to use eSwatini as Trillian’s springboard into the rest of the African continent.

eSwatini press secretary Percy Simelane confirmed that the government had met Trillian but said “the company did not meet our standards and the process was stopped. We therefore have no loan agreement with them”.

At the time Trillian was making headlines in South Africa for all the wrong reasons.

Its business practices were exposed in a 2017 report by advocate Geoff Budlender into the company. This followed his investigation into alleged multimillion-rand corrupt practices at Eskom and Transnet.

Sexwale commissioned the report in October 2016, after numerous allegations of corruption in Trillion, which was 60% owned by Gupta associates Salim Essa and Eric Wood.

The M&G asked Sexwale to comment but he had not done so by the time of publication. 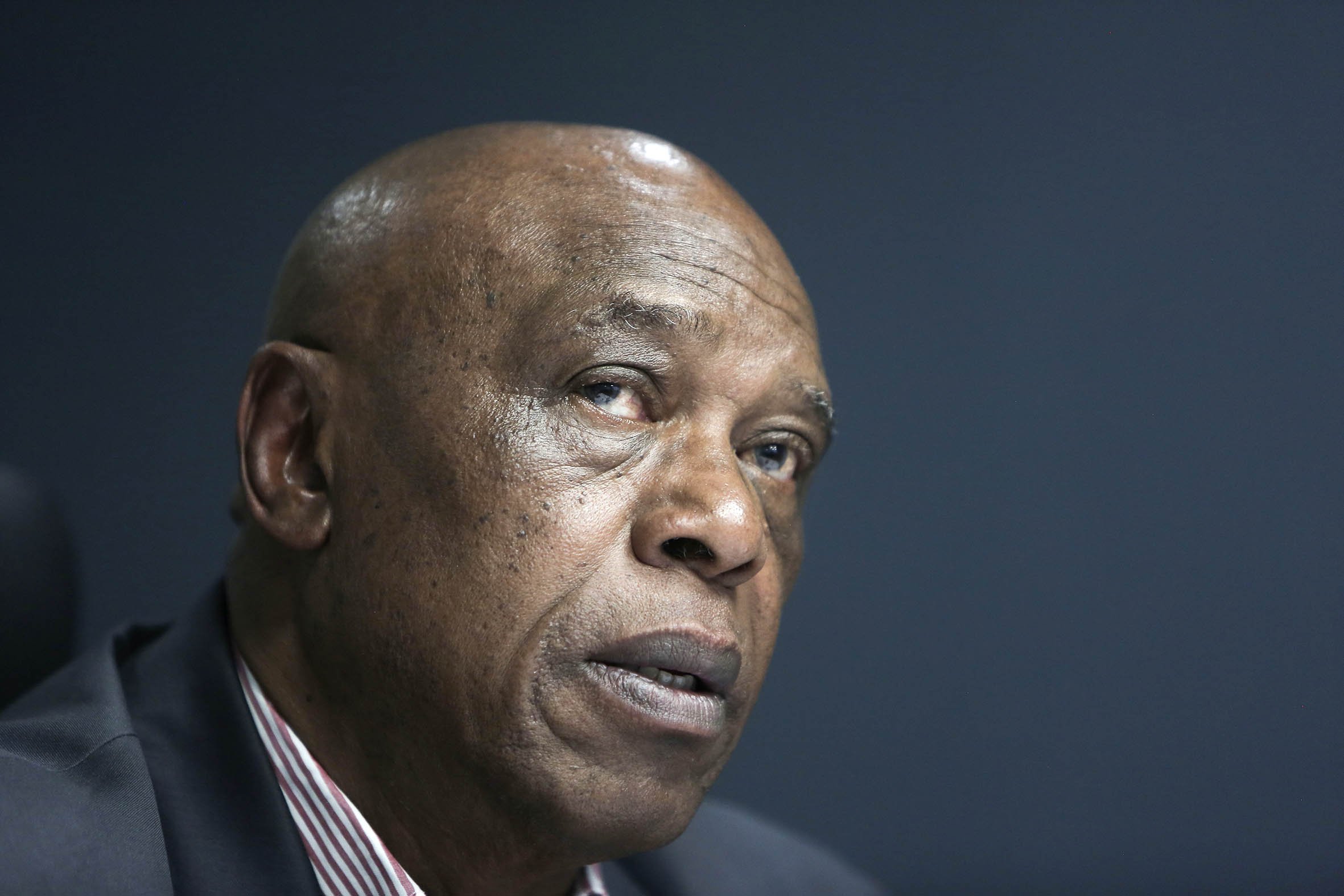 Linked-in: Tokyo Sexwale commissioned a report into the business practices of Trillian after allegations of corruption emerged. (Alaister Russell/Gallo Images/Sowetan)

The eSwatini operation and scope of the meetings, as well as information shared, follows a similar pattern to the way four-day finance minister Des van Rooyen, within hours of being appointed, also shared confidential information meant for the Cabinet with Trillian chief executive Wood. This was in a bid to help the company tailor proposals to treasury and other government departments.

A trail of leaked emails from the time showed how Van Rooyen forwarded the classified document, which detailed business opportunities in Africa, a plan to deal with ratings agencies as well as proposed government spending, to his adviser Ian Whitley.

Whitley then sent it on to Gupta ally and Trillian’s majority owner Essa, as well as Mohamed Bobat and Malcolm Mabaso, the adviser to then mineral resources minister Mosebenzi Zwane. Bobat, another of Van Rooyen’s advisers, forwarded it to Wood. Previously Wood had also been given confidential financial plans of the co-operative governance department when Van Rooyen was minister there.

Trillian made the news after former employee Mosilo Mothepu blew the whistle on how Wood knew, and told her two months before, that Nhlanhla Nene would be removed as finance minister in December 2015.

In eSwatini, Trillian was given access to high-level administrators, including the assistant governor of the Central Bank Mfan’fikile Dlamini, whom they met at the bank’s headquarters in Mbabane on September 27 2016.

According to the Trillian document, the meeting discussed the creation of an offshore banking centre. The document also said: “This topic is still very new to them and only a high-level desktop study was done a few weeks ago. An older study dating back to 1999/2000 was performed by the Central Bank. Do not have a copy of this and have requested it from KMPG.”

Earlier that same day, Trillian visited the financial planning office in the capital and met the principal secretary of economic planning, Bertram Stewart, as well as his counterpart at finance, Bheki Bhembe. In that meeting, the company was mandated to secure funding for the ICC and hotel projects, as well as negotiate with potential operators for the hotels.

“Post the meetings, the team has agreed on the following deliverables for the next two weeks: top-down financial model to be done on the ICC and the hotels; high-level position paper on the tax haven and offshore bank; of the other projects in the pipeline, TCP (Trillian Capital Partners) will identify work streams that could potentially be executed by the team.

“Consideration will also be given to the financial viability to TCP of the project as the projects are filtered; the scope of TCP’s services are likely to encompass feasibility studies, financial models, capital raising, cost optimisation as well as researching new revenue with respect to the revenue diversification.” 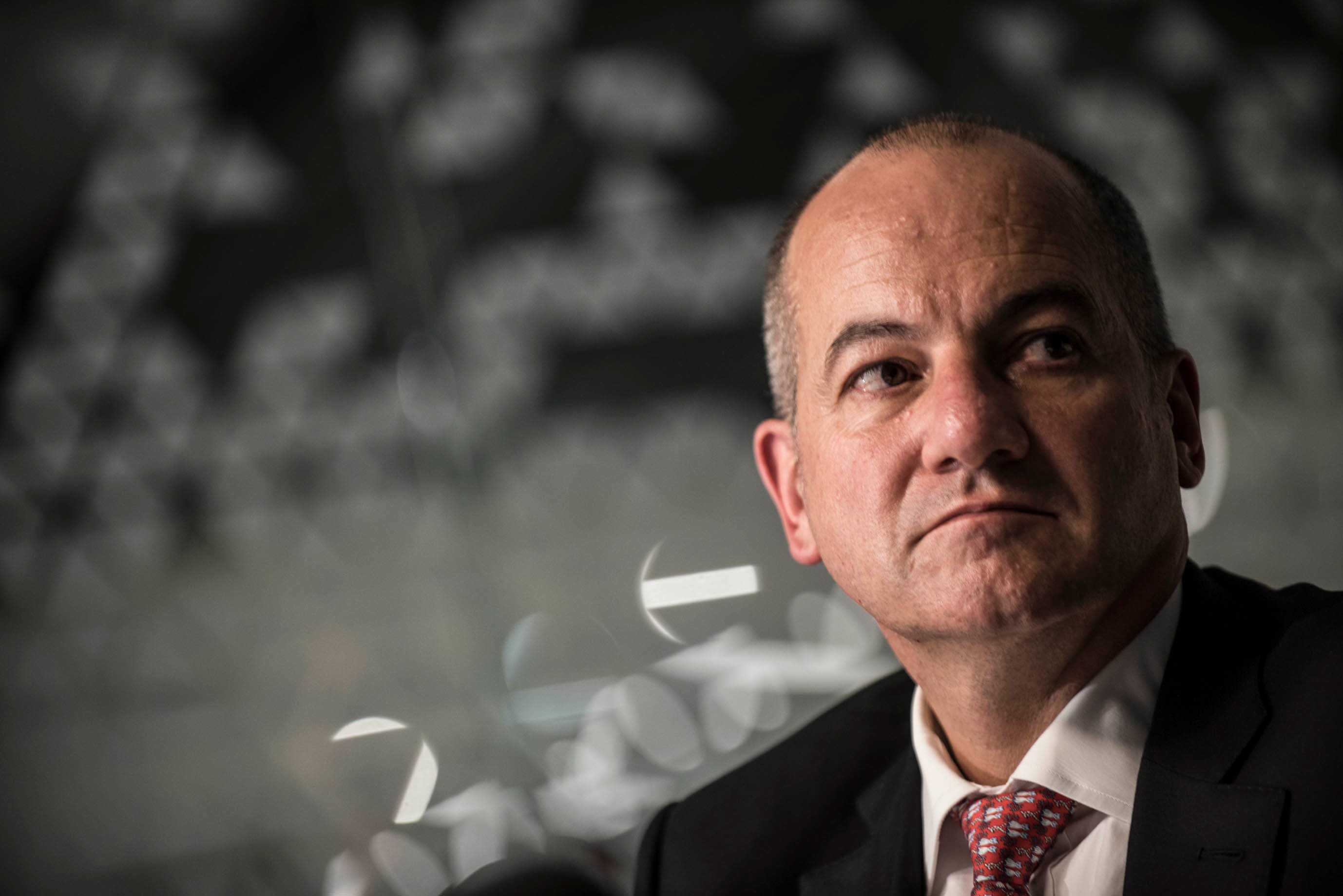 The company was part-owned by Eric Wood and Salim Essa, both Gupta associates. (Paul Botes/M&G)

Earlier this year, the amaBhungane Centre for Investigative Journalism published an article detailing how the ambitious prestige projects in eSwatini had quadrupled from R1-billion to R4.8-billion — a number not confirmed by the government there.

The projects, which have been delayed by more than a year from last year’s completion dates because of financial constraints, were meant to be completed in May (ICC) and October (hotels).

Corruption has driven eSwatini’s economy to the brink of collapse and the country, along with South Africa, is also considered among one of the most unequal in the world.

The king’s hunger for impractical first-world infrastructure — including the R2.5-billion international airport that services one airline, SA Airlink — has made the situation worse.

As well as the construction of the multibillion-rand International Convention Centre (ICC), two five-star hotels and marketing eSwatini as a tax haven, Trillian also identified 13 other future projects that the country was looking at in the future.

These included hydro and thermal power-generation projects and the Western Railway Link which would have had trains running through South Africa, eSwatini, and Mozambique.

Some of the projects would be funded by reforms to pension fund legislation, which was also discussed with Trillian, that would create more local instruments for pension funds to invest in.

This meant that the funds had to keep 50% of their wealth in the country, up from 30% before, thus increasing money circulating in the economy.