The Nigerians who are bullish on SA

As President Muhammadu Buhari visits South Africa this week, two Nigerians with dual residence talk to Lester Kiewit about what makes them want to stay in the country that has become their home, and how they navigate an often hostile reception to their identity

Charles Ofchukwu has been living in South Africa for more than 20 years. He has a South African wife, and four children born in the country.

Ofchukwu is Nigerian, but he says South Africa is home.

Members of the Nigerian community in Cape Town have come out to say that despite recent xenophobic tensions — particularly targeting Nigerians living in parts of Johannesburg — they won’t be leaving in a hurry.

Nigerian President Muhammadu Buhari is also in Pretoria, on a visit to mend strained relations between two of Africa’s largest economies.

President Cyril Ramaphosa has been at pains to apologise to African countries whose citizens have been targeted during the recent violence.

But the government has stressed the violence was a result of the economic uncertainty of South Africans, and not anti-migrant sentiment.

Ofchukwu, who is the chairperson of the Cape Town-based Nigerian Informal Traders Association, says it is time for African migrants to announce they’re not in South Africa as visitors but as residents and contributors to society and the economy.

“It’s awkward that we have to justify why we call South Africa home,” Ofchukwu says.

“But I think it is necessary for us to do it. We need to tell our own story. The Nigerian community is making a wide and positive impact wherever they are in South Africa.”

Ofchukwu says he moved to South Africa to look for better opportunities during economic and political instability in his home country during the mid-1990s. 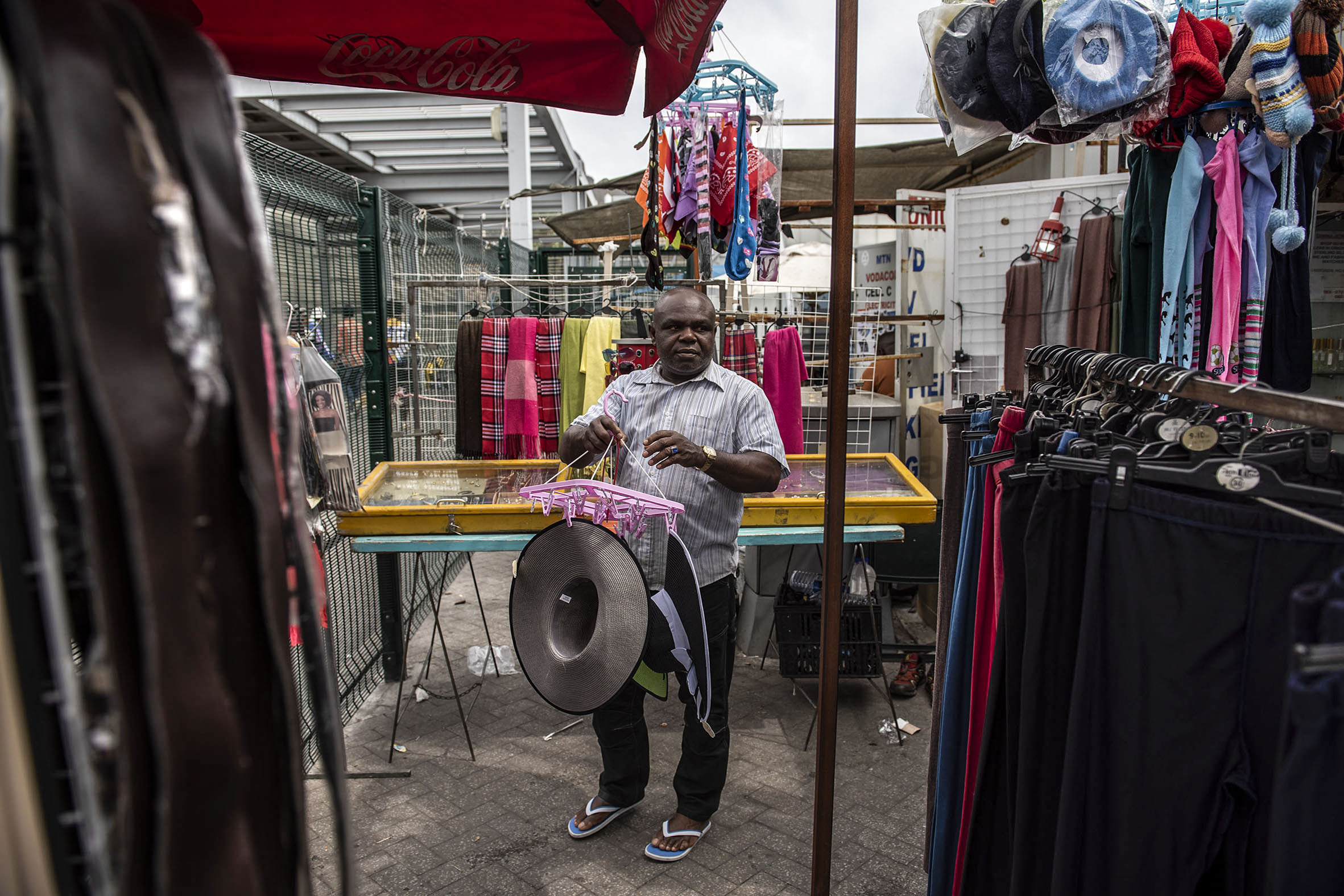 Charles Ofchukwu is the head of the Nigerian Informal Traders Association. (David Harrison/M&G)

He calls Cape Town home and his base, and occasionally travels back to Nigeria for visits.

“We are well entrenched in the South African community. We’ve been here, as a community, for as long as South Africa has been a democracy. My wife is South African — a lot of Nigerians are married to South Africans —so it’s not just about us coming to live and work here, we are integrating here culturally and otherwise.”

According to the 2016 Statistics South Africa community survey, about 30 000 Nigerians live in South Africa. This is a far lower number than seen in the viral social media posts that claimed 800 000 Nigerians were in the country.

It’s these inaccurate and misleading numbers that many in the Nigerian community say has led to them being targeted, with the stigma placed on migrants leading up to the latest wave of anti-migrant sentiment.

She considers herself a social worker, who fosters greater understanding between migrants and locals.

She moved to the country in 2006. Two years later, xenophobic attacks swept through South Africa’s major centres. Nearly 70 people were killed, 21 of whom were South Africans, and thousands of migrants displaced.

Adebayo says she moved here after meeting Nelson Mandela. Although she has often been left disappointed by the anti-migrant sentiment, she sees her time here as a positive experience.

“South Africa is home. I’ve been here since 2006. I came via Scotland. My husband was transferred here for work. We had the option to go to other places, but we chose here because of Mandela,” she says. “I was curious to find out more about South Africa and I knew the country was a rainbow nation. Mandela, the music and the people attracted me.”

Adebayo says that because of her work, she understands the frustrations of the locals in tough economic times.

But she says that as migrants fight for and eke out lives in unfamiliar — and often inhospitable — countries, South Africans should take their own financial emancipation into their own hands, and not wait for the government.

“In the communities I work in I see the disparities between the haves and the have-nots … I do see the other side of Cape Town where there’s high unemployment; there’s high crime,” Adebayo says. “But I believe that a lot of young South Africans blame others for their problems. How can you blame a Somali for opening up a shop? You need to develop yourselves; I don’t see that enough.”

Adebayo and Ofchukwu have different experiences of integrating into their South African communities.

Ofchukwu says that, despite his children being born in South Africa and holding citizenship, they’re often labelled foreigners.

“My children’s mother is a South African who has lived here her whole life, but the kids also get pointed out for being Nigerian, because they answer to my surname. And when they are at school they are called Nigerian,” he says. “But the thing is, they are proud of their heritage.”

Adebayo says she can see how the children of migrants are adapting to South African life. Many of them consider themselves to be South African, rather than the nationalities of their parents.

She says Cape Town is home for the foreseeable future. It is the place where her children have their roots. “My son was born in Scotland but calls South Africa home. And when they were kids, they played with kids in the coloured community and they picked up this Cape Town accent,” she says. “So my son can go back to Nigeria [and] people hear his accent and wonder where he is from. But when they hear his name, they would know he is Nigerian, and I like that.”

Earlier this week, the nonprofit Nigerian Community in the Western Cape organisation, expressed optimism about the meeting between Buhari and Ramaphosa.

But it also wants greater recognition from South Africa of the contribution made to the local economy by Nigerians.

“Nigeria and South Africa have a strong economic and political relationship, but for some reason, this does not reflect in the lives and activities of the wider community of Nigerian professionals and entrepreneurs living here,” says the organisation’s acting president, Cosmos Echie. “And, while we acknowledge that some Nigerian nationals may be involved in illegal activity, many more of us are not.”

Last week’s tremor has anti-nuclear campaigners questioning the safety of Koeberg, although the nuclear facility said the plant is designed to sustain a magnitude-seven earthquake
Read more
Motoring

An activist art collective is refusing to leave a luxury holiday home, claiming their protest is to highlight landlessness and growing inequality in Cape Town
Read more
Education