Time is significant to the images Nonzuzo Gxekwa makes. Occupying conventions of portraiture and street photography, and sometimes unsettling these genres altogether, Gxekwa’s photographs tend to wrestle past and present as she captures the bricolage of city life in Johannesburg. Her works vividly contemplate the intricacies of a society grappling with the debris of the past and makes careful consideration for the issues of the day and how they might speak to this place and the people that inhabit it — or reflect on wider societal fragments.

Prompting a divergent way of reading Gxekwa’s photographs, beyond what meets the eye and going further than the limits of the frame, author Teju Cole writes: “Photography is inescapably a memorial art. It selects, out of the flow of time, a moment to be preserved, with the moments before and after falling away like sheer cliffs.”

This quote urges questions about what lies beneath Gxekwa’s images and compels viewers to consider her photographs as part of a composite and bigger story, one carrying interrelated narratives catapulting into varying spaces and times.

As Gxekwa’s works oscillate between not only past and present but also personal and political, this interplay is envisaged in City Movement/Work III (2019), part of her Movement series documenting Johannesburg’s inner city. From first glance, this street scene relays a bustling city with people scampering in pairs, groups or alone across a road. But a deeper read prompts varied interpretations that survey the sociopolitics and the minutiae of the day. The frame gives a sense of busyness as people dash along, while cars, a taxi and the allusion to trains — deciphered through the logo of the national railroad service Transnet in the background — add to the feeling of activity. In a maelstrom of transportation modes and rushing individuals, the almost silhouetted figure in the foreground disrupts the telling of time of this photograph. Wearing a dark suit, brimmed hat and hands in pockets, the figure slows down the momentum of the image and, through his attire, evoking 1960s fashion, catapults the scene back a few decades. 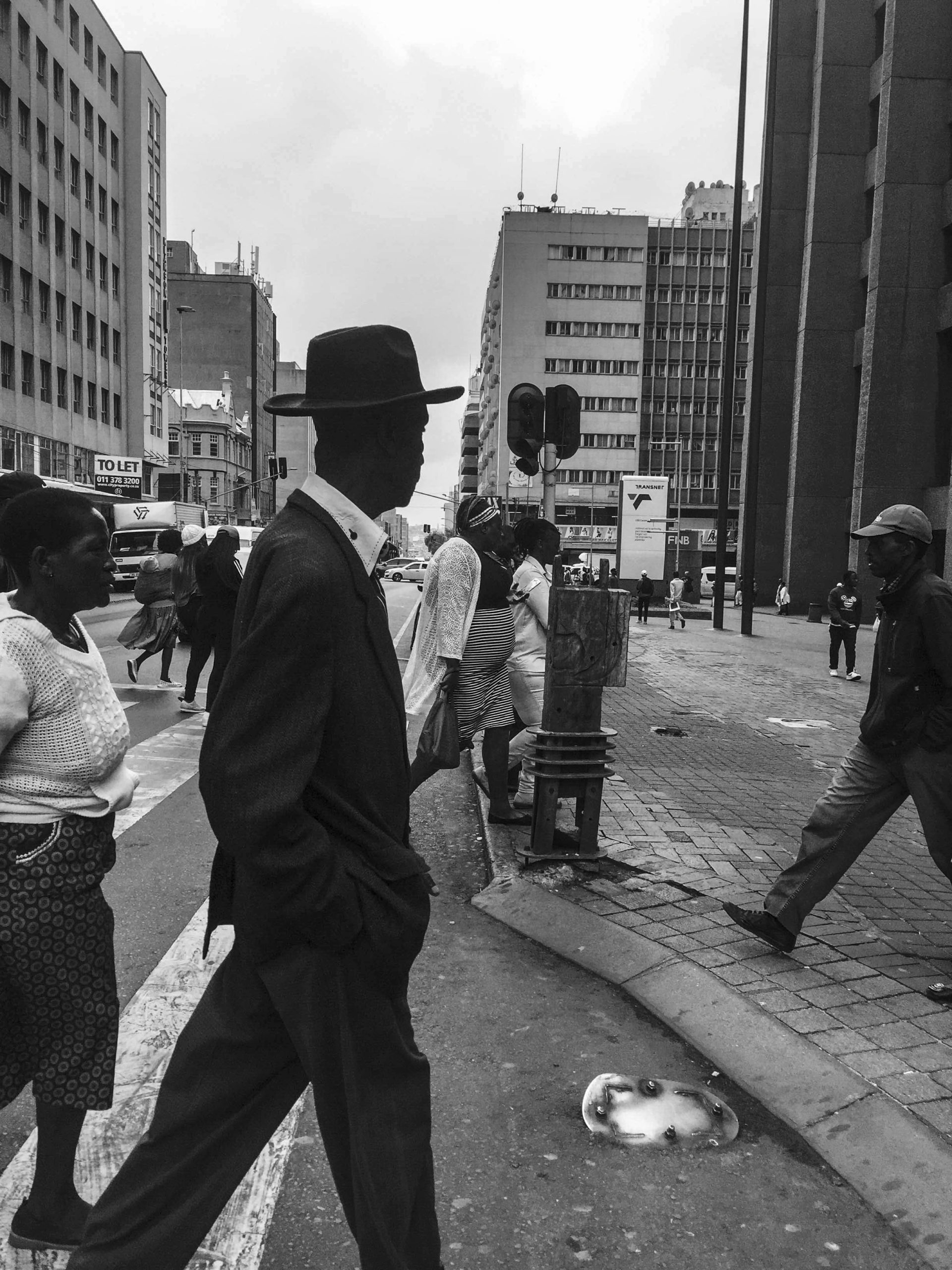 Reflections: City Movement/Work III (left) reflects a sense of people on the move and plays with past and present.

A closer examination of the photograph reveals further textual clues, such as a “To Let” billboard and a sign for a bank, FNB, positioned directly across from an ornately designed Victorian structure that appears out of place among plain, towering buildings. From architectural designs that amplify the winding spatial story of this city to the interaction between people and space, pointing to movements of people and interconnectedness of city life, and the intimation toward commerce and economic systems, City Movement/Work III reads as a textually provocative image, rich in pace and layered with nuances that, if read with depth, lift the narratives of a city and people. In a body of work as filled with documentation of urban environs as the Movement series is — some intimate like City Movement/Work III or more aloof such as the aerial City Movement/Taxi II (2017) — Gxekwa’s own presence is palpable. She becomes involved in these moments, wandering the city, making visual annotations of the world her with her camera.

I meet Gxekwa in Johannesburg, in a bookshop where she works. As 1970s-era Roberta Flack plays on rotation, any argument of time as linear becomes untenable. A few years after high school in Vryheid, Ladysmith-born Gxekwa left KwaZulu-Natal in 2006 for Johannesburg. In the city she joined her older sister Nomvuyiseko and twin sister Noncedo, also a photographer, and a collaborator on their photographic project Carbon Copy. Working between retail and restaurants, Gxekwa relays that photography became a crucial tool for her to visually diarise a bustling urban metropolis, which she claims is vastly different in comparison to the small town of Ladysmith. 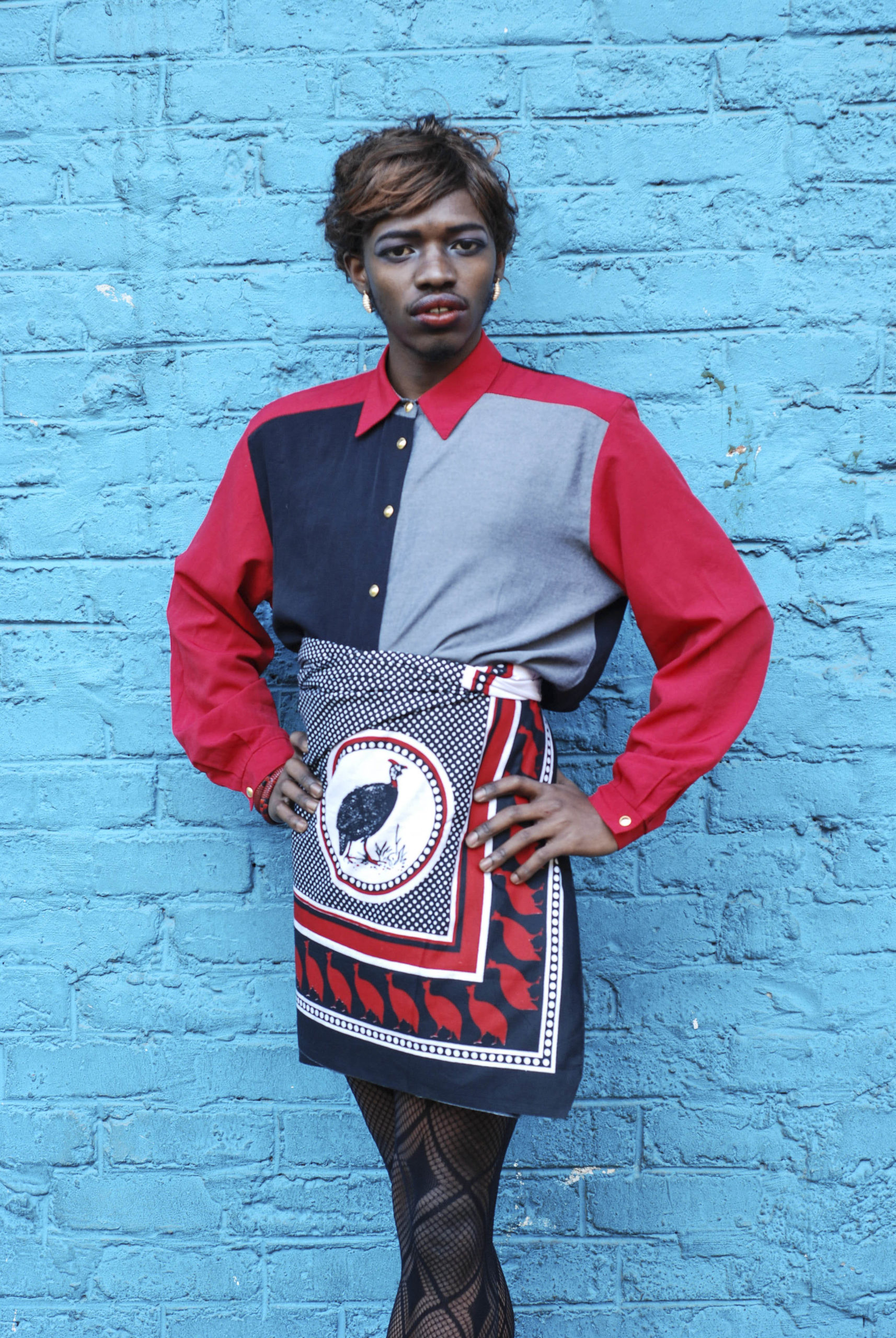 Finder: Black Masculinity (above) and Hair (below) question the meaning of identity through clothes and hair. (Nonzuzo Gxekwa) 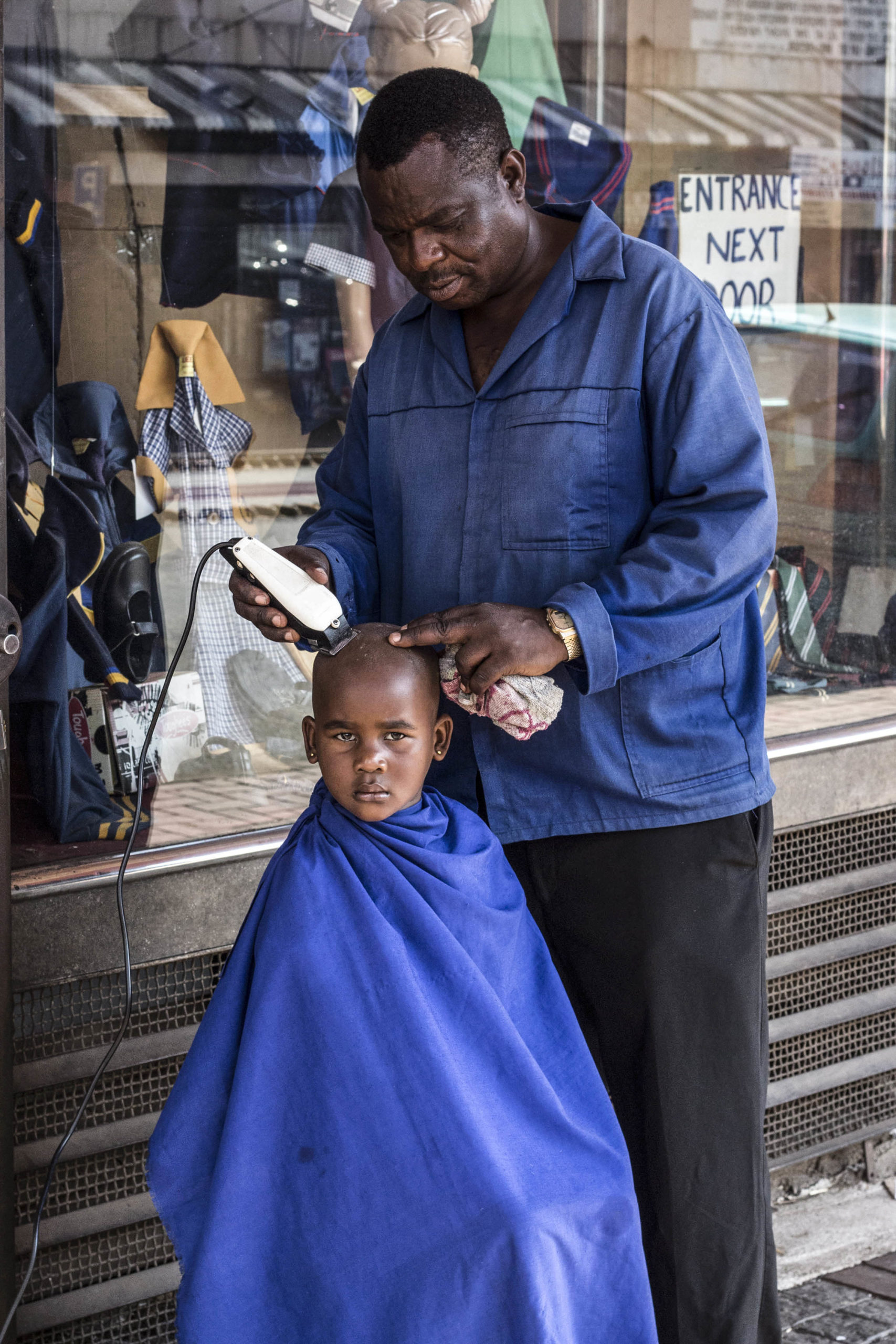 “Photography happened as a means to find my way around the city and just to document what was happening,” she says.

Gxekwa’s process of walking and documenting evokes the concept of the flâneur; an ambling figure that documents social settings around them.

“Flânerie, it would seem,” writes Professor Eileen Julien, of Indiana University Bloomington, is an “apt approach for discovering and investigating the montage (rather than a neat linear narrative) of modern urban life”.

Julien’s assertions highlight the incongruousness of urban spaces, and how flânerie could be an instrument to engage compounding realities in these environmental contexts. Writing on the concept of the flâneur and artists in relation to Johannesburg, art historian and lecturer Mpho Moshe Matheolane emphasises the flâneur’s occupation with vision and the built world around them, while agitating a Western and gendered (white heteronormative European male) telling of the flâneur. Matheolane discusses the complexities that black people in Johannesburg have faced documenting the world, especially in a city fraught with a colonial and apartheid ordering, and complicated by post-apartheid political paradigms.

Gxekwa’s images of urban scenes do not speak to a fascination that preoccupies the opportunistic Western gaze. Instead, they are nuanced and illustrate the work of someone who is a part of this environment, moving through these spaces, and capturing them as she sees it. Matheolane’s sentiments about black artists who document urban society are not lost on Gxekwa, who is similarly concerned about how violence in the city —through Afrophobic attacks, gender-based violence and legacies of violent pasts — negotiates not only her practice but the lives of people in these spaces. wanderer in bree (2019), exhibited in September alongside photographer Lebogang Tlhako at the Underline project (as part of the Yenza Kwenzeke exhibition), alludes to Gxekwa’s movement in the city.

In wanderer in bree, two people with their backs to Gxekwa — wearing similar nunnish dresses, pink and pristine — stand wedged between two taxis. They are positioned in front of a concrete column heavy with layers of paper stickers advertising abortion clinics and promises to assist clients “in the red” clear their debt. Despite the anonymity of her subjects, wanderer in bree evokes visual cues that hint at personhood and self-expression through community, and muses on religious practice and the vulturistic qualities of capitalism. Despite the uniformity of the subjects in wanderer in bree, Gxekwa agitates homogenising representations. Her canon of portraiture, which includes some street documentary and “studio” photographs, reads as photographical footnotes to convoluted city life and the complex nature of identity, sexuality, gender and cultural practices. 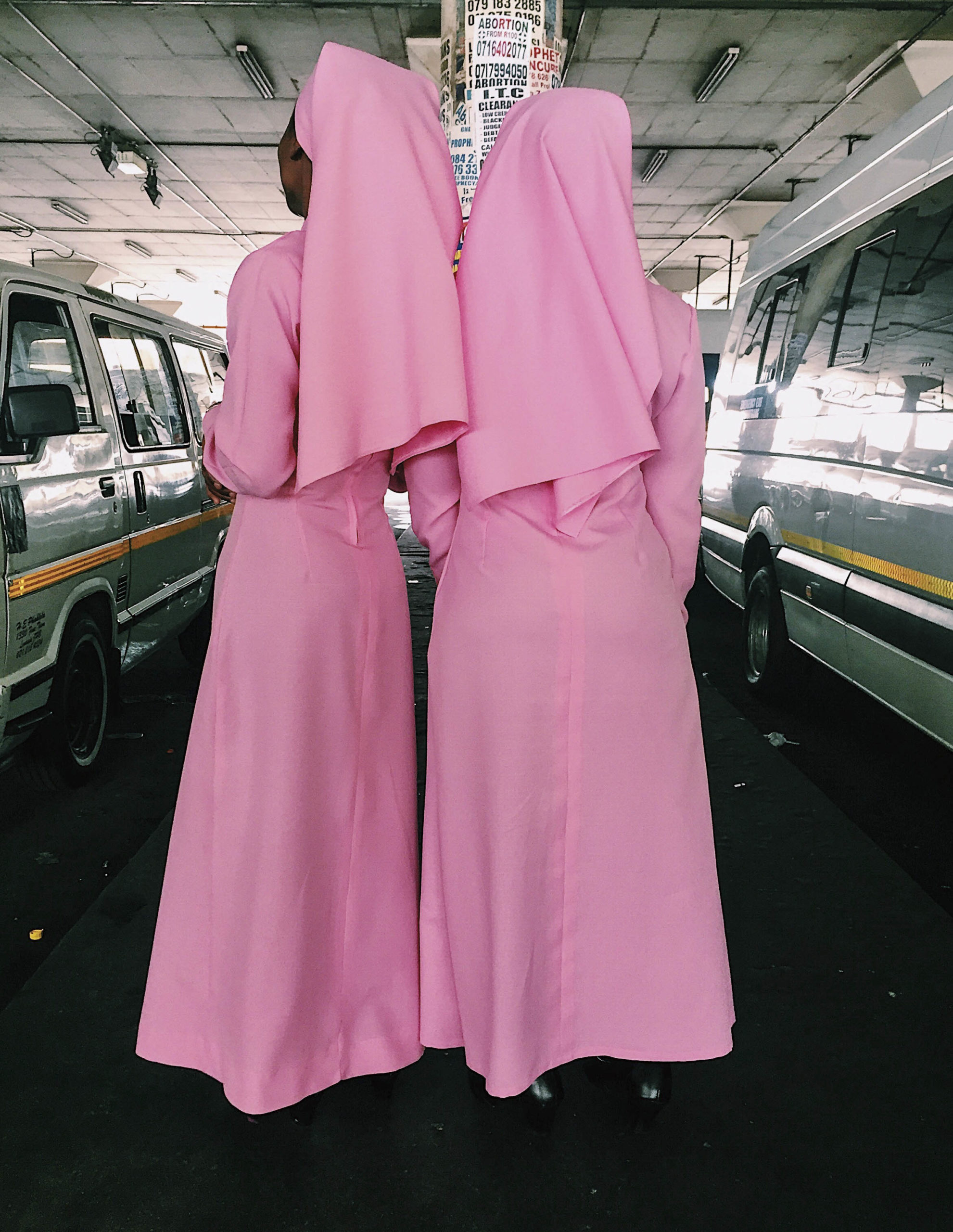 wanderer in bree contrasts ‘nuns’ in pink with adverts for abortions and promises of no debt. (Nonzuzo Gxekwa)

Whether through fashion or hair, style is a precious marker in her images. Much, in the form of visual representations as spatial explorations and self-expression, can be extrapolated from the starched “Sunday bests” or eclectic aesthetic of her subjects.

In her series Black Masculinity, a vivid photographic montage of portraits and fashion pieces, Gxekwa urges viewers to question the role of clothing in disrupting or shaping notions related to gender and sexuality. Her series, Hair, visually engages discourse of the politics of identity through black hair or, as Gxekwa describes it, “the shift in perception of black hair”.

Imaging slices of urban life in Johannesburg, Gxekwa’s critical and budding collection of photographs are striking in contemplating the minutiae of an ever unfolding society. As her works engender a way of looking that encourages the viewer to go deep, Gxekwa’s photographs can be thought of as visual time machines that undermine a normative and linear telling of an urban environment and the people in it.