This was the decade of climate negotiations, extreme heat and record-setting carbon emissions. It started with little hope of action to control global warming, flirted with hope and ended with that hope largely squashed. Sipho Kings writes that, by this time next year, we’ll know if we’re going to do enough to keep this world vaguely habitable. If we don’t do enough, in a decade’s time there’ll be droughts, floods, wildfires and crop failure on an apocalyptic scale, causing deaths, social unrest and mass migration

If average global temperatures increase at their current rate, the United Nation’s climate scientists warn of a world where ecosystems — including coral reefs, wetlands and forests — collapse. Many parts of the world will be too hot to work in. Droughts and floods destroy agricultural systems. People starve. Mass migration occurs and destabilises unprepared recipient countries.

In their report, titled “Global Warming of 1.5°C”, the scientists warn what this means: “Poverty levels increase to a very large degree and incidents of starvation increase very significantly.” High levels of public unrest then follow, “resulting in some countries becoming dysfunctional”.

The report came late last year, in the middle of the hottest period in recorded history. Last year also set the record for the most global carbon emissions. This year will probably break that record. In South Africa, there’s been unseasonal flooding, record temperatures have been set across the highveld and drought cripples large swathes of the country. Emissions here have only declined because of economic stagnation.

Globally, it has been a decade dominated by climate. Extreme weather events, a change in the language we use and mass protests have made the climate crisis a major concern of many voters around the world. The decade included, in Paris in 2015, the adoption of an international climate agreement, but it was bookended with failed negotiations.

The decade started with a low point. In late 2009, at climate negotiations in Copenhagen, the promise of an international agreement to do something about carbon emissions was choked out. Nobody was willing to compromise. Getting 200 countries to agree on something is difficult — we can’t even all agree that landmines are bad.

With no one willing to compromise, a group of leaders led by Barack Obama, then the president of the United States, unilaterally signed off on a plan to reduce emissions. South Africa’s president also signed it. The Copenhagen Accord noted that “strong political will to urgently combat climate change” was needed. It suggested a goal: “The increase in global temperature should be below 2°C.”

At this point, the world had already warmed by 0.8°C. It has now warmed by 1.2°C. That seems like a fractional increase, but fractions of a degree normally come over the course of centuries and we’re on course for a near 4°C rise in the world’s temperature since the start of the industrial revolution in the late 1700s.

Copenhagen was the foundation of South Africa’s climate plan, which allows emissions to grow by more than 20% until 2025, stay there for a decade and then drop from 2035 — but still not to levels that scientists say are needed. This plan is tied to Eskom’s coal-fired power plants, with most of the fleet being decommissioned by 2035. But the plan has been roundly criticised. The international organisation, Climate Action Tracker (CAT) —the most authoritative group on collating the sum total of countries’ plans — has labelled South Africa’s “highly insufficient”. If every country in the world did as little as South Africa about its carbon emissions, CAT says the world would warm by nearly 4°C.

With goodwill gone after Copenhagen, it took extraordinary negotiating skills — led by South Africans — at international climate negotiations in Durban in 2011 to rescue things. This led to the 2015 Paris Agreement, a necessarily weak plan for tackling climate: to get more countries in, you have to demand less of them. That was the strategy used to put in place the Montreal Protocol on ozone-depleting substances, signed in 1987, which started small but has done so well that it has now done more than any other international agreement to lower carbon emissions.

At the heart of the Paris Agreement are nationally determined contributions — what each country says it will do to lower emissions. 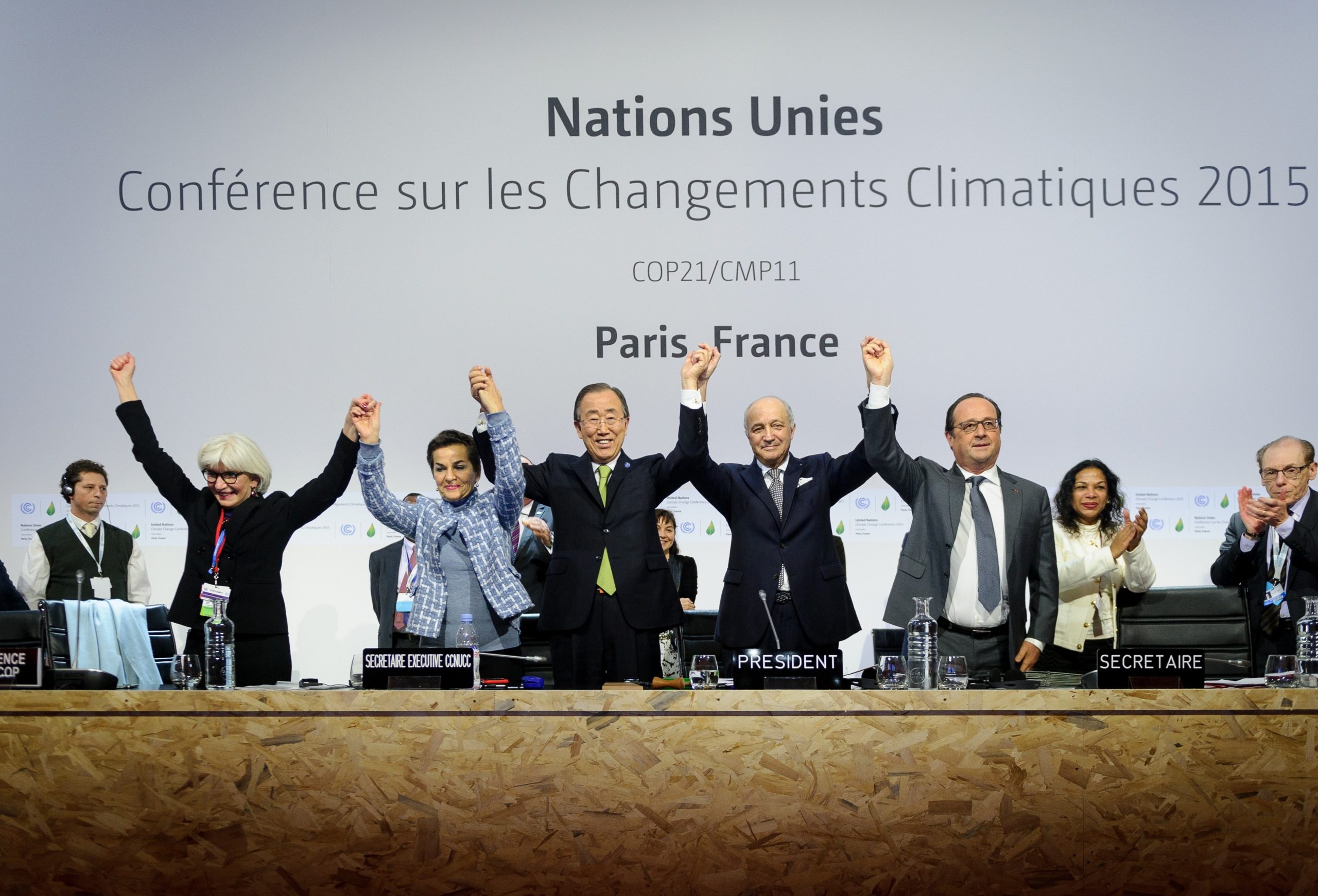 South Africa’s current plan is basically the same as its 2009 one.

The Paris Agreement asks governments to hold “the increase in global average temperature to well below 2°C”. That’s the number scientists think would do a great deal of damage, but wouldn’t collapse the world as we know it. The agreement also asks countries to “pursue efforts to limit the temperature increase to 1.5°C”. That’s the number African countries, and the island states that are already disappearing under the rising sea, say is the maximum threshold before things start to go seriously wrong. It’s a number that will probably be exceeded in the coming decade.

In late 2018, the UN’s climate agency, the Intergovernmental Panel on Climate Change, published the “Global Warming of 1.5°C” report. This looked at what happens if the world warms by more than 1.5°C. Even the best-case scenario comes with drought, flooding, hunger and mass migration. Each of these cases get worse the longer the world continues to emit high levels of carbon pollution and they all threaten the existence of human society in its current form, with the possibility of tens to hundreds of millions of people dying.

Given the stakes, the report said large-scale, “unprecedented” action needed to happen to cut global carbon emissions by 45% by 2030 and to net zero by 2050.

Countries, mostly in Western Europe, are cutting emissions in line with this scientific warning. South Africa’s plan — and the new national energy plan — doesn’t follow what science says is needed. Medupi and Kusile, the world’s third- and fourth-biggest coal power plants, will still be operating in 2050. As could two private coal plants the government wants to build, despite a court order that government look at those plants’ effect on climate change and reconsider its decision.

Spurred on by the 1.5°C report’s warning, and following the withdrawal of the US from the Paris Agreement, the UN secretary general, António Guterres, has become more vocal about the need for countries to adopt more ambitious climate change actions. In September, he called a summit where he asked countries to come up with better plans. South Africa wasn’t given a speaking slot because its plan wasn’t ambitious enough. So, President Cyril Ramaphosa sent the speech he would have delivered. This noted that “our region is likely to become drier and drastically warmer”, and pointed to Cyclone Idai and the 1 000 people who died in Southern Africa as an example of extreme weather events. Local research, he said, points to “major climate change impacts occurring in the region over the next several decades”. These include “multiyear droughts that compromise water security and heatwaves impacting on human health, livestock production and crop yield”.

At the COP25 Madrid climate negotiations this month, South Africa promised to increase the ambition of its climate plan.

The country plans that came out of Paris come into effect next year, or in 2025, and many countries are required to submit more ambitious plans before the climate talks in Glasgow next year.

To be more ambitious, South Africa should decommission coal-fired power plants earlier than planned. The national energy plan shows that replacing coal with wind, energy and gas power plants would be cheaper than running an Eskom fleet (which in any event can provide only 70% of its capacity). Closing coal-fired plants breaking air quality laws will prevent the deaths of 333 people a year.

That national energy planhas been stalled thanks to corruption, ineptitude, political infighting and competing interests of departments, such as mineral resources and energy, environment and public enterprises. And the unions failed to be proactive and prepare for energy from wind and sun and instead hampered plans to deal with Eskom’s crisis.

Despite South Africa’s promise (and those of other countries) to scale things up, the Madrid talks largely failed. These were meant to iron out technical details left undecided at the Paris Agreement, including carbon trading and who pay for damage already done by the climate crisis. Countries such as the US and Brazil were instrumental in undermining the negotiations.

A decade that started with little hope has ended in gloom, despite the optimism of Paris in 2015. The science says carbon emissions have to almost halve by the end of the next decade. Nothing shows that this will happen.

But in the spirit of Christmas, South Africa could rewrite its part in this narrative. If the national energy plan is followed, the country will build a mixed grid dominated by wind and solar power. That would save lives and create a whole new economy.