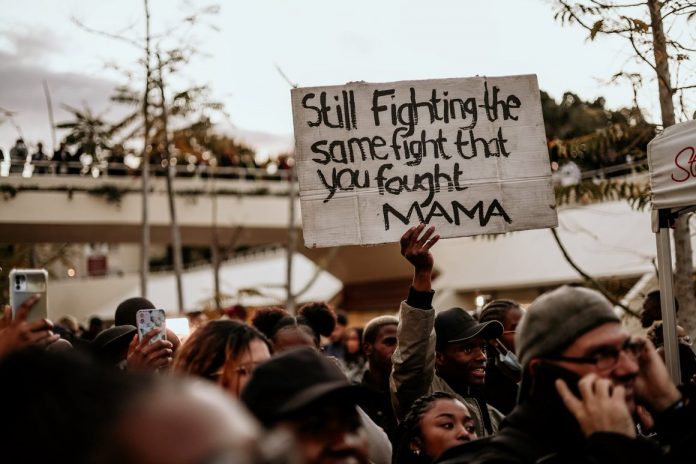 A poster at a recent rally against racism at Stellenbosch University read “Still fighting the same fight you fought MAMA.” This poster signalled an exclamation worth pausing for reflection on Youth Day (16 June) in remembrance of the courage and sacrifice of the young people involved in the Soweto uprisings of 1976.

Each generation South Africa’s youth have been advocates for change and have shown recalcitrant leadership and systems stubborn to change that a different future is possible. But the recent past also tells us that student and youth uprisings have a contentious relationship with and within Stellenbosch University. Our sense is that the university’s institutional memory does not fully capture and engage with the transformative work or legacies of different generations of students.

An important distinction must be made between un-remembering and forgetting. Forgetting is a natural and inevitable process of memory whereas un-remembering is the deliberate process of erasing and repressing realities that are too painful and shameful. Or even more sinister, un-remembering is the telling of a different story or lying to preserve a less truthful memory. Our hope is that this Youth Day reflection may create an awareness of the cost of un-remembering when it comes to what has happened to students in their struggle for structural change at Stellenbosch University.

The value of an institutional memory is that it would be unthinkable for Stellenbosch University to easily distance itself from its continued racist culture that is rooted in its ill-birth of settler-colonialism, forced removals and being the ideological birthplace of apartheid. Such an institutional memory would be aware of the structural, symbolic, and cultural forms of exclusion that each generation of students over decades worked to expose and transform.

More importantly, an institutional memory would place the moments of youth-led rupture in conversation with each other and the university’s history. Adopting such an intergenerational recognition of student-led movements and challenges to the university, exposes the suppressed memories of an institution that is slow, perhaps even unwilling, to make sense of itself, what it represents, and who and what it continues to exclude. This is in spite of generations of youth opening fruitful terrains to build collective memories and challenge the institutional culture at the university.

Over the last decade, several youth-led movements at Stellenbosch University and their national counterparts at other tertiary institutions have opened participatory stocktakings of the university’s exclusionary institutional culture by exposing the structural forces and discriminatory rules and practices that underlie it. The Open Stellenbosch movement in 2015 was rooted in changing the exclusionary language of instruction but ultimately sought to rid the university of its apartheid remnants. The 2015 and 2016 Fees Must Fall movement contested the financial exclusion of black and poor students and also demanded a decolonised curriculum. In 2019 an  Anti-Gender-Based Violence movement placed rape culture, the perpetual sexual unmaking of feminine bodies, sexual harassment and gender inequality in higher education at the centre of its contestations.

Most recently, the anti-racism student collective made it clear that the racism and hate crimes that continue to occur at the university are not isolated events that happen in an ahistoric vacuum. The students proclaimed that racism is enabled by a white Afrikaner culture that wants to retain Stellenbosch University as its home in an attempt to relieve its ill-founded white anxieties.

As part of its centenary celebration in 2018, the university acknowledged its “inextricable connection with generations past”, which creates the impression that it seeks to embed a fixed memory to exonerate itself from its difficult present. Although the student-led movements of the past decade each had their own mandates, they ultimately entered into intergenerational rememberings and came up against an institution that denies the possibility of the call for intersectional justice as an ongoing process.

We re-remember that these youth-led awakenings have come at a painful cost to those involved, and our worry is that the university commits itself to un-remembering while these awakenings haunt others that do not have the luxury to forget. During our time at Stellenbosch University we have seen the best leaders in each generation lead with conviction by demanding change not only for their peers but also for future generations.

Leaders of movements have been, to varying degrees, subjected to different forms of institutional silencing, exclusion, policing and institutional amnesia. Some faced outright condemnation and academic exclusion, some were suspended and harassed and others were brutally maltreated by an unjustifiable militarisation and censorship of higher education institutions nationally. These consequences have left many of our peers despondent with material, social and psychological scars and memories that will never see them come back and claim the fruits of their sacrifices.

Our experience at Stellenbosch University shows us that a fundamental tension emerges: young people confront the institution’s past and articulate different futures but come up against a system unwilling to remember. Our inference is that the university denies students the possibility to resurface the past in the present, by holding forth an image of a university that has transformed itself and labels discriminatory incidents as unfortunate cases untelling of the circumstances that give rise to them. Ultimately the university waits for the academic and institutional demands to dampen the fire of youth re-remembering. How is it then that another generation has to demonstrate tirelessly at the slow pace of transformation and its resulting racism at Stellenbosch University? What will happen when the dreams of another generation of young people are also deferred and what will be the cost of their institutional invisibility in the university’s memory?

Because Youth Day is embedded in our national memory as a painful moment to remember, we believe that Stellenbosch University can only truly celebrate this commemorative day when there is an overhaul of how it chooses to remember and critically examine what it has un-remembered. As a start, to collectively make sense of intergenerational youth struggles, we must imbed in the university’s institutional memory that each generation of students has accelerated change that would have taken the university decades to achieve.

During the anti-racism rally, a student cried out: “You have met the wrong generation this time.” But what will the future tell of the university’s response to this generation’s demand for intersectional justice? Will it be a tale of an institution that knows how to un-remember? The consequences of un-remembering should not be transferred to tomorrow’s youth asking again, “How many weren’t filmed?” By re-remembering, the university would prevent the recent anti-racism rallies from dying just as silently as their predecessors and would also speak openly and honestly about its selective institutional memory so that another generation of young people don’t have to rise up and challenge it.

Gideon Basson is an assistant lecturer and researcher at the HF Oppenheimer Chair in Human Rights Law in the department of public law and Rabia Abba Omar is a master’s student in visual studies at the Centre for the Study of the Afterlife of Violence and the Reparative Quest at Stellenbosch University.

Rabia Abba Omar
Rabia Abba Omar is a master’s student in visual studies at the Centre for the Study of the Afterlife of Violence and the Reparative Quest at Stellenbosch University.